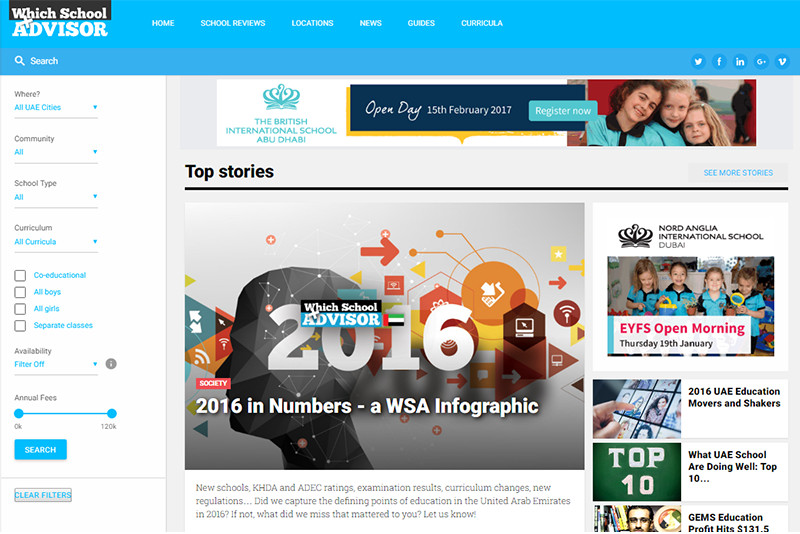 In April 2012 Co-Founder James Mullan was sitting at his computer, researching his family's upcoming holiday. As he was working hard / trawling through impossibly beautiful pictures of pristine white beaches, his wife, Pom, came into the room and asked him:

"Have you ever heard of this school? My friend has been offered a job there..."

James looked inside his head, wondering at the size of its dark cavernous abyss and, well... came up empty. "Nope, never heard of it..."

As his eyes returned to the screen, he wondered, out loud, "Wouldn't it be great though if I could just tap in the school's name in my computer, and all of the relevant information just sort of popped up - a bit like this travel review site?"

Ping! James reached for his phone, and dialed his workaholic friend, the other co-founder, David: "You're always coming up with new Web sites... What about...?"

A week spent researching the internet, questioning friends and acquaintances revealed the high level of frustration and angst that existed among parents concerning many common issues related to their children's education. As parents themselves they could identify very easily with these concerns. There was a clear need for a dedicated, comprehensive website that addressed the real needs of parents educating their children internationally.

The idea was initially for a site that would be built up on comments on schools, but David, a content and digital journalist by trade (and someone who likes to express his opinion), argued that a more in-depth review based web site, with the ability for users of the site to have their say would be far more used and valuable. School reviews require quite structured information in order to be used objectively. User generated content could capture the feel an 'objective' review could not, but facts and analysis would still need to be provided.

As parents, James and David felt they had three quarters of what was needed, but they missed the insight of an educator - someone who understood the dynamics of schools inside and out. The team knew the perfect candidate. Enter Mike Biggs, a senior educationalist, and all round awesome human being, with over 25 years of experience in the profession who immediately saw the benefits of the site for parents - and for schools.

After months of discussion David took all the acquired knowledge and used it to develop a prototype WhichSchoolAdvisor.com using WordPress, a site that in the end proved robust enough to last over three years. In February 2017 however a bespoke platform and content management system were built by our technical lead, Luke (also known as Loogle - because he is like Google, but better), based on your feedback, as well as ideas from the ever growing WSA team itself.

Over time we have had some amazing people join the team: Lyn, Jenny, Maureen, Cursty, Emily, Veathika, Carli, Craig, Tiffaney, Eimear...  all of whom have added immensely to our story. You can find details of the current team below - but we value the contributions of everyone who has come and, some of them, gone.

We very much hope you feel the site continues to deliver on its original promise. Five years on there is still plenty of road ahead, and you will find many reviews still work in progress. What's more, none of the pages on the site are static - too much is changing, schools are constantly in the process of upgrading and reinventing themselves; new schools are coming online, continually changing the educational landscapes of the markets we are within. Some of our reviews have now been rewritten over ten times.

Keeping up and progressing with the schools we cover is a sizeable task, however your positive and kind comments fuel us. Please do continue to send your feedback. It really does help us in writing and defining WSA's next chapter...

Susan Roberts - Senior Editor
SusanRoberts [at] WhichSchoolAdvisor.com
Susan describes herself as an "Education Enthusiast | Early Years Education Expert and, perhaps most revealingly, "Differently Wired". Having an independent thinker is invaluable for WhichSchoolAdvisor.com which needs objectivity, and the ability to zoom in and out to see both the big picture, and also how smaller parts of a school or nursery work together - or not as the case may be.

Susan comes to Which Media from Kids First, where she was Nursery Director.

A former editor of Explorer magazines and books, Carli is responsible for the editorial growth of WhichSchoolAdvisor.com as we expand to the East and West. Over the last 36 months we have launched in the UK, Singapore, Vietnam, Thailand, and Hong Kong. As we open up new markets, Carli will be our go to person.

Lyn lived in the UAE for 17 years and all three of her children have been educated in part or full in Dubai, in both the UK and IB curricula.  She has been through the process of searching for a new Sixth Form school for her younger daughter to enable a switch of curriculum for her final two years.

Lyn’s interest in education started as a Parent Relations Executive/ Registrar for one of the GEMS schools.  She also worked as the Registrar for a new school. This was followed by eight years working in Relocations.

Lyn joined WSA very early in its development in late 2013 and has previously headed up both sales and consultancy for WhichSchoolAdvisor.com. In 2017 she took on the exciting role of Community Manager and Editorial Consultant to help us deliver school news and information to those that need it, where they need it. In 2019 Lyn took on overall responsibility for the review updates of the site.

Reviews have never been as up to date.

Eimear initially came to Which Media to build the commercial side of sister site, SchoolsCompared.com. Her passion, drive, ingenuity and can do approach (and refusal to ever give up) has seen her promoted to head the whole of commercial for Which Media.

Contact for: Sales, commercial opportunities, a chat as to why WhichSchoolAdvisor.com is essential for your success!

One of the two founders of WhichSchoolAdvisor.com James Mullan has been a communications advisor for more than 20 years, working with some of the most successful global and regional brands. He has been running his own communications consultancy, based in Dubai, for almost seven years. He's also taken an active role in community events and was one of the founding committee members for the Emirates Airline Festival of Literature. As a long-time resident of the UAE and a parent of two daughters, James has a deep interest in the education sector and is delighted to be playing a role, however modest, in its development.

David Westley, GM, Co-Founder
Contact: [email protected]
David Westley is a long time UAE resident, journalist and entrepreneur. Having architected and worked on some of the biggest information and news based Web sites in the region including Gulf News (Portal Manager), Yahoo! (Head of Content) and Arabian Business (Digital Director), he thought he would put some of his expertise into working on a project close to his heart: education. With a daughter who has been schooled in both the UAE, and at boarding school in the UK, he is aware of the advantages and the pitfalls of UAE and international education options.

Dr Michael Biggs - Founding Consultant
Mike Biggs is an educator, senior school leader and lifelong learner with research interests in education. Having worked in primary, secondary and higher education in the UAE over a twenty-five year period and, as an experienced headteacher/principal in Dubai, he has a wide knowledge and first hand experience of the challenges parents face.

Mike no longer has day to day involvement in the site, but his advice when we started was invaluable. We know he still watches from afar, and his articles continue to inform parents on the site to this day.