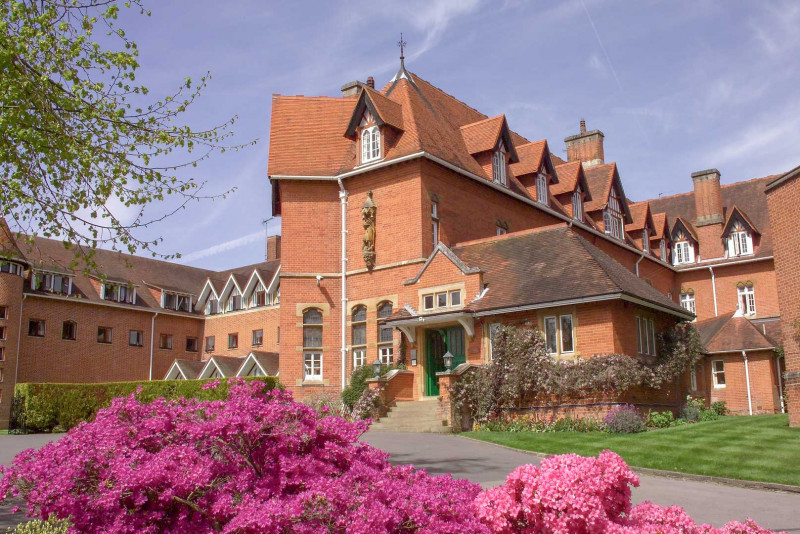 The Catholic faith is integral to daily life at this small, full boarding school in Berkshire that offers a wonderful mix of the traditional and the forward-thinking in its academic, extra-curricular, and sporting programmes.

Based in Berkshire, St Mary’s Ascot is a day and boarding school with a small, friendly (and very hardworking) community of just 350 girls aged 11 to 18. A high achieving school at both GCSEs/IGCSEs and A Levels,  St Mary's is one of the top Catholic schools in the country – and it has some of the most outstanding sports facilities for such a small school.

Founded in 1885, the original mission was to educate Catholic girls; it was believed that girls are intellectually equal to men and should have the same opportunities and education. Today the school remains a strong advocate of single-sex education for girls, all within a nurturing Catholic community. Its evolving programme of academic, the arts and sport stays true to the words of its founder, the 16th Century nun and educator Mary Ward, that ‘women in time will do much’.

St Mary's gives preference to Catholic girls because the Catholic ethos forms “a cornerstone of life at St Mary’s”. 98% of the school’s students are Roman Catholic, and other Christian denominations make up the other 2%. There are ties with families over generations here and huge loyalty towards the school from ex pupils.

The school’s motto is “For the Greater Glory of God” and a Catholic education here means learning about fulfilling human potential, not for self-aggrandisement, but for the Glory of God and for the benefit of others. The Chapel is at the heart of the school, literally. There are five morning chapel services a week and Mass on Sundays. Assemblies and prayers also take place in house or tutor groups.

All students attend one or two day Retreats per year to “step out of everyday school life and reflect on her faith”. The Retreats often include discussions, workshops, drama, walks and silence, to allow time for reflection.

The school has a fairly large international community; about 22% of the girls come from abroad, mainly daughters of expats, and around 8% are foreign nationals. The school takes just a small number of day girls from the local area, at the moment only 15.

Danuta Staunton, Headmistress since 2019, is the school’s second lay Head. She attained a first class honours degree in English Literature and a distinction in her MA in Renaissance Literature from York University. After a role in a publishing house, she joined St Mary’s as an English teacher, and knows the school extremely well.

Are you a parent, teacher or student at St Mary’s School, Ascot?
Take a survey arrow_forward

St Mary’s is proud to be an extremely academic school. With small class sizes, and less than 400 students on campus in total, the school can offer its students that higher level of personal attention and guidance.

In Years 7-8, they study a broad curriculum delivered by a team of specialist teachers. There are plenty of opportunities to study foreign languages, starting with French and Latin in Year 7. Girls sample German, Italian or Spanish, as well as having taster sessions in Classical Greek and Mandarin, before deciding to take any as options.

Girls are expected to take 10 GCSE/IGCSEs with a compulsory core of seven subjects and a choice of three others. They can choose between Art and Design, Classical Civilisation, Classical Greek, Computer Science, Geography, Spanish, Music, Drama, Latin, History, German, Italian, Mandarin and triple science (instead of the compulsory double science).

Girls take four subjects in Lower Sixth and continue with three into Upper Sixth. A few take five in Lower Sixth, if they are bilingual or taking Further Mathematics. There's a wide choice of A Level subjects (23 this year), which include all the usual core subjects as well as some non-traditional options such as photography, theology and theatre studies. St Mary's is flexible enough to update its course offerings year on year, with psychology being introduced in September 2021 at A Level.

Sixth Formers are encouraged to leave school with more than their A Levels – many take the Extended Project Qualification (EPQ). The Lower Sixth Electives Programme offers girls the choice of completing short courses in areas such as Psychology or Archaeology and Anthropology, Public Speaking or Mental First Aid.

The facilities at St Mary’s are excellent, particularly for such a small school. There is an athletics track, two floodlit AstroTurf pitches (which become 21 extra tennis courts in the Summer), five further floodlit hard courts for netball and tennis, a grass football pitch and a 25m indoor swimming pool. There is a state of the art indoor sports complex called the Orchard Centre, which has four badminton courts, indoor basketball and netball, a fitness suite, two squash courts and two dance studios.

In Year 7, all students play hockey, netball, tennis, rounders and athletics, as well as gymnastics, swimming, cross-country and cricket. From Year 9 there are several more options, which include the fitness suite, basketball, volleyball, badminton, Zumba, yoga, Pilates and football. Every girl has the opportunity of up to two hours of sporting activity every day, which is fantastic.

As the school boasts, "we punch well above our weight in competitive sport". Two recent students represented England youth teams in rounders and netball. The girls can attend the Girls Go Gold conference and there is a ski trip to Flaine every year for the British Schools Ski Races competition.

Music is important at St Mary’s and there are regular concerts involving the orchestra, various choirs, the jazz band and various ensembles. As well as a major concert every term, there are regular lunchtime concerts and the Sixth Form runs an Open Mic night and an annual Rock Concert.

There are many clubs and societies which include Composing, Theatre Tech, Coding, Russian, Lego, Bridge and Cookery. The Duke of Edinburgh's Award Scheme is very popular here, and almost every girl in Year 9 and 10 completes the Bronze Award.

Extra activities are available for students, including karate, fencing, trampolining, squash, ballet and modern dance. If a student would like to learn polo or golf, this can be arranged.

St Mary’s has strong links with Eton, which is close by. The girls and boys meet up for societies and talks and St Mary’s pupils attend Eton’s Medics Society. There are socials on Saturdays with Eton, Winchester, Harrow, Radley and other boys’ schools. They reel, enjoy quizzes, have discussion suppers and hold joint sports and workshop events. These close relationships with nearby boys’ schools are important to St Mary’s, and help to bridge some of the gaps in education at a single sex school.

Girls are allowed to bring their pets to school and they are fully responsible for them – and there is a termly prize for the best kept pet!

Service to the community is an integral part of St Mary’s. The girls help out in local charity shops and residential care homes, and it has a squad which evens maintains local footpaths in the area. Last year the students raised over £27,000 for a range of causes.

St Mary’s performs well above the national average for GCSE and A Level, year on year.

In the GCSE results for 2021, 84% of grades were 9-8, 95% were 9-7, and 100% were 9-4, which continues the school's trend of excellence here. It's a sign of some outstanding teaching across the year groups and reflective of the selective nature of the school.

St Mary's is only 45 minutes from London, making it easily accessible yet far enough away from city life. It is set in 55 acres of countryside and the heart of the school, the Chapel, dates from 1885. Although steeped in history it has a very light, open feel and mixes huge stained glass windows with modern facilities.

There is no flexi-boarding or weekly boarding offered at St Mary’s, only full boarding. All girls live in single houses for each year group, where they share rooms and common rooms with their peers. From Year 11, the girls have single rooms.

In the Sixth Form, the girls live independently from the main school in lovely purpose built “town houses” around a central courtyard. Every girl has her own study bedroom and some are en-suite.

Students can have breakfast in their boarding houses or in the school's newly refurbished refectory. Girls from all year groups are on the all-important Food Committee, which reports on likes and dislikes.

The Mentorship scheme involves older girls acting as minders to the new girls and they can also act as subject buddies, helping younger girls with their academic work.

St Mary’s accepts around 65 students a year and the main intake is at the 11+ stage. This is typical of a girls' only school. There is a smaller 13+ intake and a very small Sixth Form intake.

Mixed ability is definitely the ethos here, however, there must a be a certain academic standard in order for this to be the right school for the student. There is a small SEN department.

The school sets its own entrance examination which takes at the school, asks for a report from the current school, and holds an all-important interview. The school does not issue past papers but the guidelines are that at 11+, papers will be in English, Mathematics and there will be a general paper which could include spelling, non-verbal puzzles and listening skills. Girls must also attend a session in the gym.

At 13+ there are extra papers in Science, Religious Studies, History or Geography, French (or Italian, Spanish or German) and Latin and it is a two-day process with girls invited to spend a night at the school. At Sixth Form, there is a general paper and interviews in the subjects chosen for A Level, as well as an interview with the Headmistress.

Only A Levels offered
No co-education