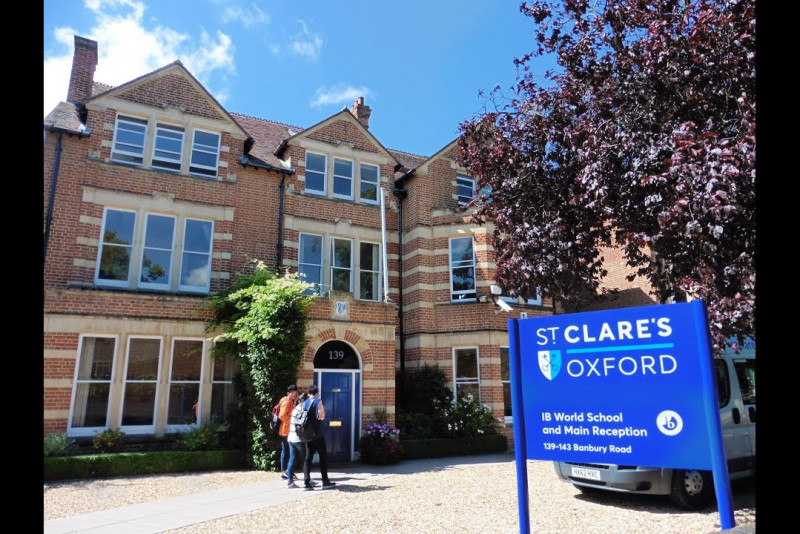 This co-ed day and boarding Sixth Form college in North Oxford offers a small international community of students a choice of pre-university courses and is one of the world's longest-running providers of the International Baccalaureate Diploma Programme.

It was founded by Anne Dreydel OBE and Pamela Morris in 1953, and grew out of a scheme to establish links between British and European students after the Second World War. The original name was The Oxford English Centre for Foreign Students, which later became St Clare’s Hall, and then St Clare’s, Oxford.

The College grew quickly to encompass a wide range of nationalities and programmes, both at university and pre-university level and in English Language. In the mid-50s, students came mostly from around a dozen Western European countries, as well as the UK. Nowadays there are many nationalities represented on the IB programme, which means that students from over 40 countries live and study here.

There are only 13 other institutions in the world that have taught the IB longer than St Clare’s. A-Levels were gradually phased out as the IB became established and it is now the longest established IB World School in England.

St Clare’s International College offers a Gap Year course between finishing school and starting university and includes a preparation course for adult students who want to apply to a university which might require certain academic results and a specific level of English. It also offers a Study Abroad semester for students at US universities who want to transfer credits to their home university and who want to be challenged in class. It also has extra English language skills classes for students to develop their English before starting their career.

St Clare’s offers summer courses for juniors (10+), teenagers and adults and Pre IB courses. The latter is for one to three terms and develops knowledge in the key subjects covered in the IB Diploma including English Literature, English Language, Mathematics, Science, Arts and Humanities.

The college offers an extensive selection of English Language courses, from personal language training for 16+ up to the professional DELTA course, for teachers wanting to enhance their teaching skills. This college welcomes students from the age of 14 years, to adults who may have been teaching for a few years. Everyone learns in a welcoming, international environment, albeit in the incredibly old university city of Oxford. It caters for all in a unique way and goes out of its way to enhance the learning of all age groups.

Andrew Rattue (MA Oxford, English) has been the Principal of St Clare’s since 2017. He has over 20 years’ experience of leadership in independent education including 11 years as Head of The Royal Grammar School, Worcester and King’s College, Madrid. He was also Chairman of Headmasters and Headmistresses’ Conference (HMC), is a Boarding Team Inspector for the Independent Schools Inspectorate, and his list of voluntary roles is impressive.

St Clare's is set to launch a Middle School in 2022, which will take students from 14 years old. They will study five IGCSEs and four IB Middle Years Programme (MYP) components. English Literature, English Language, Maths, Arts, Humanities and Sciences are offered. The students then choose three of both Higher and Standard subjects to continue with the IB in Sixth Form.

St Clare’s really does offer an especially wide range of subjects at Higher and Standard level and teaches literature in over 25 different languages. For example, for studies in Language and Literature the student can take English, German or Italian for his/her Higher choice but for Standard, the choice of languages is remarkable, including Albanian, Arabic, Bulgarian, Czech, Dutch, French, Greek, Icelandic, Japanese, Korean, Lithuanian, Mandarin, Norwegian, Polish, Portuguese, Romanian, Russian, Serbian, Slovak, Slovene, Spanish, Swedish, Turkish, and other languages can be requested.

St Clare’s does not have sporting facilities on site, but tries not to let this limit its choices of sport to students who can use the nearby gym facilities, compete for a college team or join a club in the city.

Are you a parent, teacher or student at St Clare's, Oxford?
Take a survey arrow_forward

Oxford is just one hour from London, close to Stratford upon Avon, the birthplace of Shakespeare, Bath and many other famous places. Therefore, the trips offered are extensive, ranging from visiting Stonehenge, theatre trips to London, many historic places of interest and students also travel to see premier league football games, rugby matches, rowing regattas on the River Thames, ice hockey, road races, and more.

Creativity Activity Service (CAS) is an integral part of the Pre-IB programme and of the IB. St Clare’s offers over 50 experiences a week and students can create their own CAS programme by choosing up to three per term. Some of the creativity choices include coding, Japanese culture, bridge and photography. Activity choices include spin classes, squash, yoga, basketball as well as the more traditional sports. There is a large choice for Service including Nursery Assistant volunteering, Human Rights Action group, Duke of Edinburgh Awards Scheme, Red Cross Emergency Group and Knitting for Needs.

Oxford has much to offer, not only being an international centre of learning but it is a historic, thriving, inspiring city. Students can visit the Bodleian library, the Ashmolean Museum which is dedicated to celebrating the best of the world’s history, art and culture, walk around the colleges of the university and use the many communal areas which are open all year round, such as the beautiful Botanic Gardens, founded in 1621, that Oxford offers.

St Clare’s has grown, and earlier homestay arrangements have been largely replaced with residential accommodation as new houses in the area were purchased and refurbished.

In 2000, it bought the Oxford Academy building which has become the International College. In 2014, the new Science and Mathematics building was completed, providing three science laboratories and several classrooms – and in 2015, its award-winning residence and art studio was completed. The latter is very modern, complementing the older historic surroundings. It provides separate accommodation for male and female students with en-suite study bedrooms.

The International House offers self-catering facilities, and the younger students are in a secure house with a matron on site.

St Clare’s is non-selective, but students must show commitment to learning and have a reasonable set of results aged 16. Students need to do a test in Mathematics and English and have an interview.

The boarding fees are £42,626 and day fees are £20,480. Trips abroad cost up to £700 extra and weekend activities are £250 per term. All other extras such as music lessons, Duke of Edinburgh, study visits, field trips and theatre visits are priced individually.