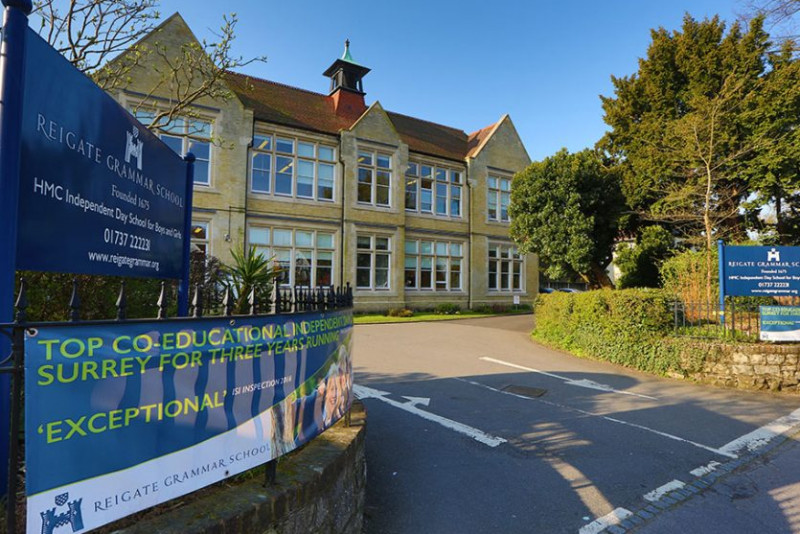 Reigate Grammar School is an academically selective co-ed senior school in Surrey with a nurturing approach to education, a broad extra-curricular offering, and a flexible curriculum that includes an extended three-year GCSE programme.

Reigate Grammar School is a co-ed senior school with a flexible curriculum and an ethos that supports and nurtures girls and boys with a wide range of talents. Located in leafy Surrey, this large day school enrols 950 students from Year 7 through to Sixth Form. It's a happy, welcoming school where children are challenged while having the choice to explore subjects that feel relevant to them; learning is further enriched with a broad education that extends far beyond the formal curriculum.

The school motto is Happy Kids, Great Results, which appears to ring true. Parents frequently describe it as friendly and supportive school with a focus on pastoral care, and national league tables highlight its academic achievements.

RGS is a selective school that still holds onto the grammar school approach of its founding roots as an-all boys free school in 1675. But while it may be a very academic school, it is not a hothouse; this is a school that expects its students to be hardworking and independent learners, but in a far more relaxed learning environment that some other top UK independent schools.

It's a school with a very nurturing side, particularly in the younger years – and it has been recognised nationally for its outstanding wellbeing programmes. All First Form students have a Sixth Form mentor and a a Second Form buddy to support them throughout their first year. It was one of the first UK schools to launch its own wellbeing festival. And it has a dedicated wellbeing centre, complete with beanbags, were students can find a sense of calm.

RGS has embraced change over the years by becoming co-ed from 1976 and merging with Reigate St Mary’s Preparatory and Choir School in 2003 and Chinthurst School (Tadworth) in 2017. Together the three schools educate around 1,500 students aged three to 18. RGS has also branched out internationally with the opening of campuses in China and Morocco, and most recently RGS Vietnam.

Are you a parent, teacher or student at Reigate Grammar School?
Take a survey arrow_forward

RGS offers a flexible curriculum that can adapt to the needs of students with varying learning styles and interests.

Students are given increasing autonomy over their subject choices as they move up the school. In Year 7, they can choose to study three different languages from a strong choice of French, Spanish, German, Latin and Mandarin.

When choosing GCSE options, students are not restricted to selecting a choice of subjects from ‘blocks’ (an approach taken by many UK schools). GCSEs are completed over three years, rather than the traditional two, and this extra year gives Year 9 and 10 students time off every week to participate in an Elective Programme; this offers the opportunities to explore less-traditional subjects such as stop frame animation, photography; learn a new language; or complete some charity work. It may not suit every student to start GCSE-level study in Year 9, but the higher level of ability of RGS students appear to cope well.

The RGS curriculum is diverse enough to offer students a wide breadth of study. From Year 7 it includes creative subjects such as DT, drama, music, art, food & nutrition and computing. Year 8 students complete an extended independent project called ‘Six Degrees of Separation’, an opportunity to explore their interests beyond the classroom through a wealth of experiences ranging from trips to podcasts and plays. And at GCSE and A Level, students have a wide choice of traditional and some less traditional subjects (A Level options include music technology, product design and psychology).

Class sizes remain fairly small, generally under 20, which helps teachers to deliver a more personalised approach to learning. There can be as few as eight students in some A Level classes.

Sporty students proudly represent Team Reigate across a range of competitive sports, and there is a wide enough choice of sports clubs too. It may not be the UK's sportiest school, but it fully recognises the importance of sport and fitness to student wellbeing and success.

The school is well-equipped for sport on campus with a 25m indoor swimming pool, dance studio, netball and tennis courts, two fitness suites, multi use games area and a sports hall. Sports fixtures are also played at the nearby RGS Hartswood Sports Ground, which has 32 acres of playing fields including include two all-weather pitches for hockey and tennis.

The arts are widely celebrated. As well as offering art and drama at GCSE and A Level, RGS stages three or four large-scale productions each year, and there are regular theatre trips, drama and dance clubs. Students showcase their talent off-campus in annual events including the National Student Drama Festival, the Brighton Fringe Festival (with a touring puppet show) and the Edinburgh Fringe Festival.

Music takes centre stage here, and there is an orchestra, a string ensemble, a swing band, six choirs, two concert bands, wind ensembles, a guitar group, a percussion ensemble, a brass ensemble, rock bands and many chamber groups. Plenty of choice for the most musical of students. There are also weekly music lessons in RGS Saturday Music College, and the chance to join the prestigious RGS Godfrey Searle Choir with choristers from RGS and Reigate St Mary’s Preparatory and Choir School.

Students can explore a myriad of interests outside of their weekly timetable, from bands, drama productions, choirs and orchestras to sports teams, Duke of Edinburgh treks, Combined Cadet Force activities and overseas trips.

RGS is a selective and high-achieving school.

In 2021, a very high 99% of A Level entries were graded A*, A or B; 89% of grades were A*-A. Students go onto Russell Group universities, and there are several Oxbridge and medical school offers every year. In 2020 (the last year that students sat exams), 66% of A Level grades were A*-A.

The most popular universities in 2021 were Bristol, Nottingham, Oxford, Cambridge and medical school with the most popular courses being Engineering, Science, Law and Medicine.

Close to Reigate town centre (and a short walk to the train station into London), RGS has developed its 17th Century campus over the years with several modern buildings. Investment over the past 15 years has seen the addition of an indoor swimming pool, Sixth Form Centre, drama studio, and a music school.

The main points of entry are 11, 13 or 16 years, and several students join Year 7 from Reigate St. Mary’s Preparatory and Choir School or Chinthurst School, Tadworth. About half the students are from state schools and half from prep schools.

All students must sit an entrance exam, and sample papers can be viewed on the school's website.

There are academic, sport, music and headmaster’s scholarships, as well as bursary places available. For all other students, annual tuition fees are £20,425.