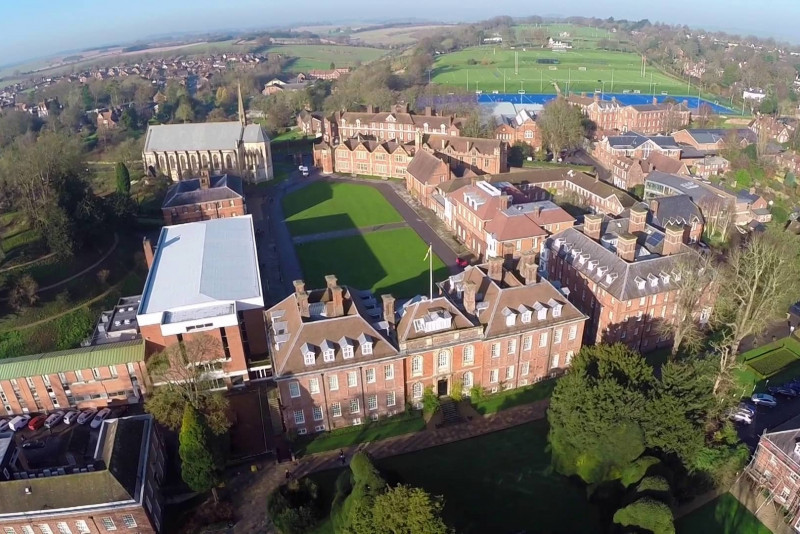 Marlborough College is one of the most prestigious of English co-educational private boarding schools.

Marlborough College is one of the most prestigious of English co-educational private boarding schools.

Originally established in the nineteenth century to educate the sons of clergy, the school became the first of the traditional boys’ schools to admit girls into the sixth form and, whilst boys still outnumber girls, Marlborough is today fully co-educational.

The school is one of the larger public schools with 15 boarding houses for around 930 pupils. Close to the market town of Marlborough, school grounds extend to some 280 acres of (beautiful) downs housing an extraordinary, impressive collection of buildings and landmarks ranging from the former mansion-house of the Dukes of Somerset and a stunning Gothic-revival chapel, to a neo-classical styled Memorial Hall and the “Marlborough Mound, a Neolithic feature of the landscape dated to 2400 BC.

The school has good transport links with the UK and is less than 80 miles from London.

The school has become best known in recent years for educating the future Queen of England, HRH The Duchess of Cambridge (née Catherine Middleton) and there is some concern, rejected by the school, that the resulting pressure on and competition for places has diluted the traditional welcome of the school to a mixed ability intake and an historic avoidance of the hothouse atmosphere of its top tier counterparts.

Marlborough was rated Excellent in its most recently available ISI Educational Quality report (2018).

The sports hall complex includes a gymnasium and fencing salle. The 25 metre pool has eight lanes and an (expensive) hydraulic bottom which, because it can alter its depth from between 0.8 to 3 metres, can be used for a broad range of water sports from diving and sub aqua to canoeing and water polo. Other facilities include its own (Ellis) 200 – 450 seat theatre and extraordinary Blackett Observatory with the largest telescope in full time use in any school worldwide. The observatory support the GCSE Astronomy course and all Year 9 pupils visit the dome over the first two terms of their time at Marlborough.

Entrance to the school has gone through a number of recent changes and the College no longer requires, or accepts, registration for a place from birth (this on the basis that parents need time to understand whether their children will “fit” with Marlborough and with boarding generally.)

Today parents cannot register their children before 1st September, 4 years prior to the point of entry.

Following visits to the school, registration is followed by formal enrollment: enrollment forms must be returned strictly by the November 20 months before date of entry.

At this point parents need to indicate their preferred boarding house and references are taken from the Head of each pupil’s current school. This reference is “very important” and highly weighted in the assessment process which includes a test (only 10% weighted) and interviews at an assessment day 18 months before proposed entry.

Successful pupils are offered a place upon which a payment of £1800 is required and for overseas students a further payment of one term’s fees and Tier 4 visa fee if required. Places are, in a recent change, only finally confirmed after success in common entrance, defined as 55% in English and mathematics and 60% in other subjects. It is likely that Marlborough will not automatically reject an accepted candidate if they miss these targets as the school advertises its “ongoing commitment to attracting good all-rounders” and “the diversity that is such a pronounced feature of a Marlborough education.”

Are you a parent, teacher or student at Marlborough College?
Take a survey arrow_forward

However it should also be noted that Marlborough no longer states that Common Entrance is used only for setting purposes and that offers of a place are unconditional. Unusually Marlborough also requires overseas and home students who have not studied a CE syllabus to still set the Common Entrance exams.

International students account for 10% of the school but this may moderate following the opening of Marlborough’s sister school in Singapore and a proposed school in the US.

Bursary provision is awarded in the form of a discount of up to 85% on boarding fees or 100% on day fees payable “depending on the financial, compassionate or other relevant circumstances of applicants” and “repeat testing of parental means each year. Marlborough does not advertise the number of students receiving bursaries, the average value of those bursaries or the total percentage of income invested in them. The school advertises particular focus on clergy and forces families. 8-12 scholarships each year do not result in any financial assistance unless an application for a Bursary has been approved.

Sport is a “key part” of Marlborough life. The school focuses on major sports of rugby, hockey and cricket for boys and hockey, netball and tennis for girls. Other sports include the spectrum of athletics, basketball, cross country, fencing, fives, football, fives, golf, lacrosse, polo, rackets, shooting, squash, swimming and water polo. Other physical activities include aerobics, dance, badminton and yoga.

Sixth Form pupils undertake combinations of 4 A level and Pre-U courses and are offered the choice of one of the Extended Project, a standalone AS in Creative Writing, (I)GCSE languages for beginners in Arabic, Italian, Japanese and Mandarin or further language qualifications in French, Spanish and German. There is a choice of 30 options ranging from fine art, philosophy and theology and music to Economic, Physics and Politics.

The school says it operates a “whole school approach” to EAL/SEN, managed by five staff, one of which is an expert in dyslexia. In practice the school expects that most overseas students neither want nor require support. SEN staff support around 9% of pupils. “Pupils usually attend one thirty-five minute tutorial each week with a specialist teacher.” The school says it is committed to accessibility with extensive 2013 and 2016 audit recommendations now “significantly” actioned.

The IGCSE is not included in government league tables but around 77% A*/A. A-Level equivalent results are exceptional given the (relatively) broad-based, albeit increasingly selective intake, at 61% A*/A. Marlborough has never been a hothouse school and it should not be judged as such.

Marlborough had an exceptional 17% Oxbridge slipstream in 2014 with 22 pupils taking up places.

A further 7 pupils went on to study medicine with significant numbers alternatively attending Bristol and Edinburgh.
Whilst open to all faiths, or none, Marlborough College is denominational with an Anglican Foundation and the school is specific in its entry requirements that “those looking to join Marlborough College must be comfortable with the demands set by our Anglican foundation and character.”

Informal Mumsnet reviews are mixed highlighting the increasingly academic, less progressive/liberal focus of the school, its having majority of “smart” wealthy parents, being better for more “robust” pupils and being “a boys school with girls” although the 60:40 split in favour of boys is not uncommon in the independent sector to ensure boys are not dominated.

Our view
Marlborough College divides opinion in no small part both because it is less selective in its entrance than the hothouse schools and less prescriptive and authoritarian in its educational approach.

The resulting mix of students, whilst always seen as one of Marlborough’s great strengths, has traditionally lead to an array of very different outcomes and experiences for its pupils.

However, on the traditional-progressive scale it aligns with the more traditional and many argue the new more rigorous focus on academics is accentuating this. Academic results, pushing Marlborough higher up the league tables, is certainly suggestive of increasing selection and focus.

Nevertheless, added value is impressive and Marlborough has certainly been upping its game academically following its “Good” but not “Excellent” rating for academics and leadership in the school’s 2012 ISI report.

For prestige it certainly carries considerable weight and its alumni is undoubtedly impressive.

Whether the school will be right for your children is further complicated by the (significant) differences between boarding houses even within the school. Quite regardless, having a chance for a place requires “long game” planning of at least four years prior to the required date of entry, the benefit of which, however, is a requirement for a number of visits to the school upon which a final decision, and the pros and cons behind it, will be more clear cut.