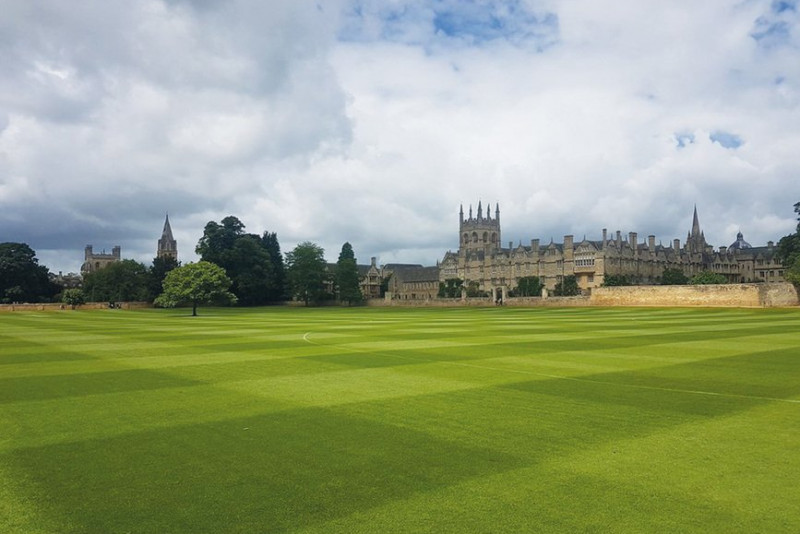 Magdalen College School is an academically selective day school for boys (and girls in the Sixth Form) located in Oxford, which boasts some of the top GCSE and A Level grades in the country.

Located in central Oxford, Magdalen College School (MCS) is a day school for boys aged seven to 18 years and girls aged 16-18 years. It is a high-achieving academic school offering a challenging and traditional curriculum that prepares its students well for entry to some of the UK's top universities.

While part of this school's charm lies with its incredible history, another part is owed to its wonderful location in a city that is awash with a rich scholarly history. MCS is over six centuries old, and was founded by William Waynflete in 1480 as part of Magdalene College to educate the college choristers and boys from the local town of Oxford. He was Bishop of Winchester and Lord Chancellor of England, but he was not born into an aristocratic family, and he wanted everyone of ability to have the chance to learn and prosper.

Today, it remains a conservative school for boys, with girls only admitted to the Sixth Form; about 50 girls join from predominantly local schools to MSC – and they need a minimum of six GCSE grades 8-9.

MCS opened a junior school for boys aged 7-11 years in 1994. Located in a separate campus next to the  Cherwell River, MCS Junior School students have access to the facilities at the Senior School. The schools share specialist teaching staff, and there's a "small army of willing Sixth Formers" who come over to help run clubs and activities for Juniors.

Entry is competitive and selective, standards are high in the classroom, and academic achievement is openly encouraged and celebrated. Don't come here looking for the unconventional; this prestigious school is for those students who want to follow a traditional pathway to university – and have a determined focus to achieve the top grades.

MCS is unashamedly a very academic school, and students are known to come from far and wide, travelling miles to get here. In the school's own words, it encourages its best students to take four A Levels as this gives them "the opportunity to flex their academic potential when applying to the most competitive courses and universities".

Helen Pike has been Master at MCS since 2016. Having studied modern history at Christ Church, Oxford, Ms Pike achieved a scholarship to study a Master's at Ann Arbor, University of Michigan; she has three Master's degrees. Ms Pike has taught at and led an impressive list of highly academic schools, including some that are single-sex.

After lecturing at Warwick University, she taught history at Westminster School and later became Deputy Head of Sixth Form at City of London Boys. Later Ms Pike taught at St Paul’s, where she was Head of Politics and then became Deputy Head at RGS Guildford. Today, she continues to teach history to A Level students at MCS.

MCS has developed a traditional curriculum that steers students towards taking A Levels in so-called 'facilitating subjects' – those that will be most preferred by top universities. There's no choice of soft subjects such as photography or psychology, with students opting for maths, the sciences and the Classics instead.

In Lower Fourth all boys study 10 subjects – mathematics, English, sciences, history, geography, theology, PE and games with French, Spanish, Mandarin and German offered as Modern Foreign Languages. Greek, Latin, computing, art and music are options. There is very little setting here, only for mathematics. The lessons are 40 minutes long, shorter than you'll find on other timetables as the school likes to keep learning fast-paced – which could be a welcome challenge for the most able, but hard to keep up with for others.

All boys study at least four A Levels in Lower Sixth and over half continue with four or more. Politics, philosophy, economics and further mathematics are extra subject choices at this stage – and among the most popular A Level subjects.

Students also undertake an independent research project called Waynflete Studies, which is like the Extended Project Qualification taken at many UK schools but with an Oxford twist. Students attend lectures on their chosen topic and are then matched with an academic from Oxford University for tutorials. The boys present their projects to fellow students, parents and staff at an annual Waynflete Studies evening, and each one is marked internally and then externally, with winners for each subject.

This is a "unique opportunity to enhance their learning in their chosen subject," and of course fantastic preparation for potential university interviews.

Sport is reasonably strong but not a priority at this school, and the emphasis is mostly on rugby, hockey, cricket, tennis and netball. Sailing is strong here too, with students using a nearby reservoir, and walking distance to the river means that rowing is popular too. Other extra-curricular sports include badminton, basketball, climbing, cross country, football, golf, lacrosse and squash.

Being a city school, MCS does not have as many acres of its own grounds as some other schools, so students do spend time off campus for various lessons and fixtures. As well as teaching on a school field next to the Cherwell River and having an on-site, fully-equipped gymnasium, the school has the use of Oxford University’s swimming pool and athletics track.

Are you a parent, teacher or student at Magdalen College School?
Take a survey arrow_forward

In the arts, the focus is on fine art here, which is in keeping with the seriousness of the school. The emphasis is on drawing as the school believes that “anything is possible from that strong foundation”. Design technology is taught as a “discrete timetabled subject” from Years 5-8. Recent projects have included a waistcoat which breathes in and out and a 500kg concrete sculpture.

There are over 60 concerts a year with ensembles, orchestras, jazz bands and a samba group. Its extensive Chamber Music programme offers the chance to perform with professional ensembles such as the London Mozart Players and the Southbank Sinfonia. The Sheldonian Concert is the highlight of the year and involves performances from the Symphony Orchestra, Choral Society and all Second Form boys. Recent performances have been Faure’s Requiem and Carl Orff’s Carmine Burana. Singers and organists achieve scholarships to universities on a regular basis.

While drama is not on the curriculum, it is taken seriously in after school clubs. MCS holds whole school productions in the Sheldonian theatre, as well as regular house plays, An outdoor Shakespeare production takes place on the banks of the River Cherwell and the students perform at various Oxford theatres, enjoying partnerships with the Oxford Playhouse and the Pegasus Theatre. Every student has the opportunity to take part in two shows a year.

In 2011, the MCS Theatre Academy was introduced in tandem with residencies offered by the school an Oxford Playhouse to young professional directors and producers. The residents provide a professional edge to the school’s productions so, like everything done at MCS, excellence abounds. A large percentage of its drama programme is performing new writing. MCS also set up a Technical Theatre Academy at the Pegasus Theatre to involve students in the technical and backstage aspects of performances.

The school day at MCS is so busy that lunch needs to start at 11am to give students the time to attend the many extra-curricular clubs; these include animation, coding, bridge, diplomacy, fencing, Russian, Vergil, Scrabble and Warhammer. Students also take part on various house events; there are six houses, and the boys tend to join a house based on the geography of where they live so that they can travel in together.

MSC’s outreach programme is huge and the school has pioneered some wonderful community programmes. These include helping local Sixth Formers with university admissions and homework clubs for local secondary schools. MCS established Oxford Festival of the Arts in 2008 and everyone gets involved from the university, local schools and local arts groups. Its programme includes music, theatre literature and film. There are also plans to perform Birdland, a community opera project, which will involve hundreds of pupils performing it outdoors on the school’s field.

Music in the Community is important to MCS and includes Lower Sixth musicians giving weekly concerts in local primary schools and nursing homes, an annual jazz concert with the Parasol Project Charity, a Lower Sixth singing workshop with local primary school children, and larger performances with them. A recent performance involved 500 local children singing in eight languages at the Sheldonian Theatre.

A Level results are consistently outstanding. In 2021, 99.3% of grades were awarded at A*-B, which is similar to previous years, and eight students achieved five A*. The cohort headed to some of the UK’s top universities, including Cambridge, Oxford, Imperial College and LSE to read subjects ranging from Medicine to Politics, Engineering and Fashion Design.

To say that this school is highly selective is an understatement, although the school does say that in the exams it "looks carefully for potential, and not simply at current attainment." The main point of entry to the Senior School is Year 7, when boys take the 11+ exams, which are the same for MCS Junior School boys as for external candidates, during a full-day assessment.

English, Mathematics and Verbal Reasoning exams are taken in the morning. The afternoon is spent “relaxing and having fun” during the activities session. If boys score well, they are invited back for an interview, which involves reading and commenting on a short passage and bringing in an object to talk about.