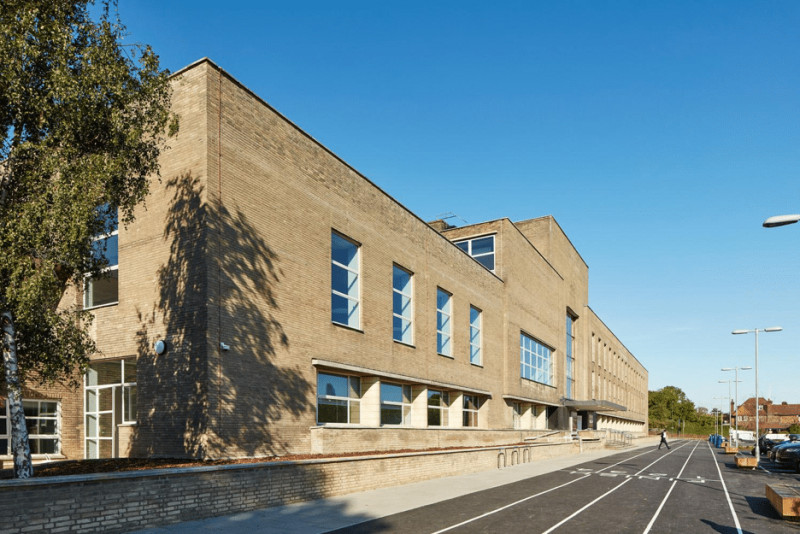 Located in north London, this bilingual school offers both the English-language IB Diploma and the French Baccalauréat to students from three to 18 years old.

Lycée International de Londres Winston Churchill is a London day school for boys and girls aged 3-18 years offering a bilingual education and a choice of IB or French qualifications. It delivers a bilingual education in French and English from Early Years to Year 13 to a very international cohort of over 800 students; students come from more than 40 countries and there’s a multi-national community of teachers and staff.

By offering a choice of bilingual, French, and international education at primary and secondary level, the Lycee has firmly positioned itself with a unique offering in the landscape of UK independent schools. Describing itself as ‘One school, two programmes’, the Lycee provides a bilingual education from as young as three years and offers non-native French-speaking students an opportunity to learn French and study the French curriculum or IB programme in a very international setting.

Parents may feel cautious about enrolling their non-French speaking child into such a school and should expect to face several challenges along the way. However, the benefits of seeing your child adapt to a different culture, learn a new language, and go from zero to fluent French speaker may be worth the early obstacles.

Located in Wembley, the school is part of a growing worldwide network of schools run by the Agency for French Education Abroad (AEFE). Founded in 2015, it was named after Winston Churchill as its opening coincided with the 50th anniversary of the former British Prime Minister’s death on 24 January 1965. Arnaud Vaissié, Chair of the Board of Governors said:

“By naming the new French international lycée after Winston Churchill, we remember the immensely important role he played in France’s past and make his memory present in our country’s future. We hope our students will feel inspired by the legacy of this great historical figure.”

Founding Head of School Mireille Rabaté began her career as a French lecturer at Brandeis University in the US and has 20 years’ experience as head of schools in France and the US.

The school was rated Outstanding for its sixth form provision in its 2019 Ofsted inspection; overall, the school's rating was Good.

As well as being a French international school in the UK, the Lycee is an IB school with a growing community of international students with a particular interest in the French language and culture. There’s a low teacher-student ratio of 1:8 which means plenty of individual attention, and teaching is focused on preparing students for university and for “thinking in two languages”.

In the early years there’s a dual language immersion programme from the age of three, which follows the UK’s EYFS curriculum and the French curriculum. There is an English teacher and a French teacher leading the lessons together in class, so students get full immersion in both languages throughout the school day.

The primary school (Years 1-6) continues with a 50/50 bilingual programme with one French-speaking and one English-speaking teacher for half a day each; there are also specialist teachers for subjects such as PE and music. Teaching encompasses both the French and English curricula. The school will consider admitting students with limited French in Years 3 and 4, but due to the demands of the bilingual programme they can’t join from Year 5 (CM1).

In the secondary school, students follow either the English International Programme (which was only launched in 2019 and is still in its infancy) or a French bilingual programme. The two streams of education are distinctly different, each with their own appeal to families of different nationalities.

Are you a parent, teacher or student at Lycée International de Londres Winston Churchill?
Take a survey arrow_forward

English speakers can join the school’s English programme in Year 7 as all subjects are taught in English (except for French). In line with the IB, teaching is very inquiry-based and there is a strong focus on critical thinking.

There is an option to take IGCSEs in English literature, English language, maths and French. This option may be important for a non-native English speaker studying at a bilingual school such as the Lycee as thy may need to achieve a Grade C in IGCSE English to satisfy the language requirements for some universities in the UK and other English-speaking countries.

For those in the French programme all students follow the French national curriculum as defined by the French Ministère de l’Education from 6ème - 2nde (Years 7-11) – just as in any local school in France. Lower secondary students prepare for the French exam called the Diplôme National du Brevet (DNB) and take the Baccalauréat Diploma in their final year. This provides students with a globally recognised university entrance qualification, just like the IBDP.

As you’d expect from the French curriculum, learning is developed using research, problem solving, analysis, and a combination of group work and individual study. Teaching focuses on independent, analytical thinking and cultural knowledge, and there is a strong foreign language policy (usually English).

The Lycee offers a well-rounded education that can help to broaden students’ horizons. As the school says, “Academic subjects are not enough in terms of education,” and it uses the space and resources it has to teach the arts and sport as part of the curriculum.

There’s also a small but varied choice of after-school activities, including sport, dance, drama, arts, music, coding, chess and Lego fractions. The school has formed some strong partnerships for sports clubs, such as with the Serge Betsen Rugby club. Duke of Edinburgh is popular, and the school runs several overseas trips to develop language and service learning skills.

Around 65% of students go on to UK universities (with a high percentage of these going to Russell Group universities), and other destinations include universities in France, Canada, US, Netherlands, Norway, Germany, Italy and Spain.

For a city-based school, the Lycee surprises with its green, leafy campus set within five acres of outdoor space in the London borough of Brent – and students have a great view of Wembley stadium too.

The school is housed in an impressive Grade II-listed, Art Deco building, which was acquired from Brent Council by the French Education Charitable Trust in 2012. Formerly Brent Town Hall, it has been renovated and refurbished to have purpose-built spaces for the sciences, arts, and technology, as well as an indoor gym and three outdoor sports courts.

The Lycee is a non-selective school, but it does have French/English language proficiency requirements (at all levels) and prerequisites for the senior years.

Good for: The Lycee offers overseas families a unique offering in London – an opportunity to study the IB Diploma Programme or the French curriculum within a very supportive, bilingual environment. Ideal for families from France who want their child to maintain their home language and national curriculum, as well as for those who want their child to study an international recognised programme that is not tied to one particular country.

Not for: Students who are not proficient in French will struggle with the bilingual programmes at the Lycee. Very sporty or arty types might prefer a more competitive sporting school or a more well-resourced school for the arts, and there are schools in London achieving higher scores in the IBDP (although these often have stricter admissions requirements).