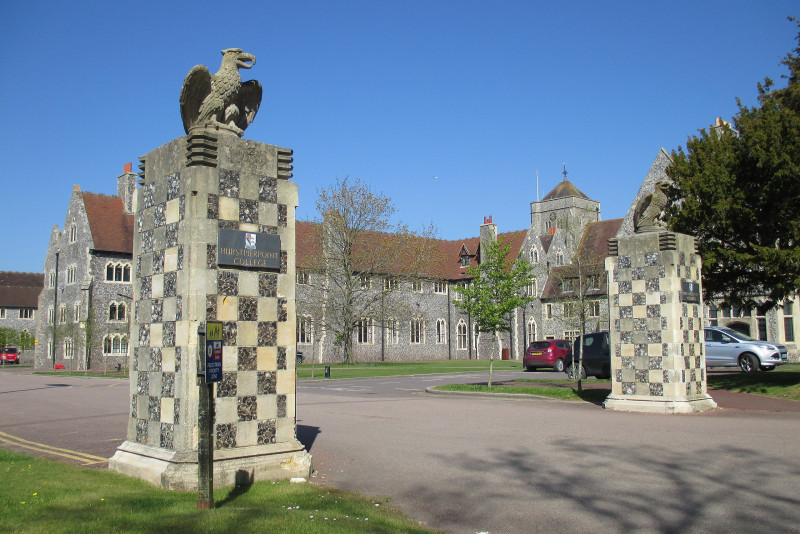 Hurstpierpoint College is a Church of England day and boarding school, which enrols girls and boys from four through to 18 years. Located in a country location close to the pretty village of Hurstpierpoint, the school is set in 140 acres of land in West Sussex.

Hurstpierpoint College, known as Hurst, was founded in 1849 and its Prep School first admitted girls in 1993 after almost 150 years of being an all-boys school; in 1995, the Senior School opened its doors to 30 girls. The Prep and Pre-Prep schools are in separate buildings but on the same site as the Senior School; it means that Hurst’s youngest students benefit from using all the outstanding facilities within the college while remaining within their own, much smaller pastoral community.

Hurst is described by Head of the Prep School Ian Pattison as “a genuine through school”, and the school works hard to ensure continuity between the Prep and Senior schools. A single Deputy Head (Academic) looks after both the Prep and Senior schools, and any changes to the Hurst curriculum at the top will result in changes all the way down. So, for example, the introduction of Spanish GCSE meant that this subject is now taught in Years 7 and 8 of the Prep School.

Tim Manly (Oxford, LSE and Cambridge) has been Headmaster since 2005. He previously taught at Sevenoaks and was Deputy Head of Oakham School.

In the Prep School, the majority of subjects are taught by the Form Tutor with the exception of music, drama, IT and PE. In Year 4 art, science, Latin and French are also taught by subject specialists and, from Year 5, students are taught by subject specialists for all lessons and move from class to class. Students are streamed by ability for English and maths from Year 3. It’s all excellent preparation for Senior School; with the majority of boys and girls going on to attend Hurst’s Senior School, you can expect the transition to be smooth.

When students leave the Prep School in Year 8 they also take important in-school exams; these include a general paper, focusing on current affairs and the ability to create an argument, as well as completing an independent research project. In line with many private UK schools today, they do not take Common Entrance exams; The school is focused on best preparing the children for the challenges of Year 9 – in Year 8, for example, school reports are written to the students themselves and they also attend parent evenings.

In the Senior School, Hurst has a unique Challenge Grade system, which focuses much more on value add rather than top marks. It means that every student’s performance is assessed according to the challenge that is set for them for each subject at the start of every academic year: they are either on target, exceeding target, or falling short. The system is described by fair as many parents, and the grades are “ambitious and – with hard work – achievable”.

Are you a parent, teacher or student at Hurstpierpoint College?
Take a survey arrow_forward

It’s good to hear then that, with such facilities available, the school operates a ‘no-one on the bench’ policy; every student who wishes to play regularly and represent the school can. And for the school’s sportiest students, there’s an enviable track record in county, regional and national competitions to follow; in the past 12 months, Hurst has ranked in the top eight in five national competitions across four sports – rugby, hockey, netball and cricket.

Art is extremely popular and the GCSE and A Level exhibition is outstanding. From early on, students get the opportunity to study drawing, painting, ceramics, photography, creative textiles and sculpture.

The New Bury Theatre opened in 2018, and is a state of the art theatre with tiered seating and with professional lighting and sound systems. There are a number of drama studios adjacent to the theatre. The list of recent productions is extensive and there is an annual Hurst-in-Rep week, where Sixth Form students lead ‘fringe performances’. Hurst has performed a Shakespeare play every year since 1854, beginning with Richard 111 and it boasts the oldest Shakespeare society in existence.

Music is strong here and the department is a busy one. There are many orchestras, bands and quartets as well as ensembles and choirs, including a rock choir. Most students take individual music lessons in a huge variety of instruments.

The school’s broad extra-curricular programme is compulsory for all students up until Year 10, and has plenty of choice in the arts, sport and club activities. Hurst’s Outdoor Education programme involves all students from Year 9 to Upper Sixth, and choices include the Duke of Edinburgh’s Award Scheme, the Combined Cadet Force, community service projects, and outdoor pursuits.

The school owns a small on-site farm which Senior and Sixth Form students help maintain as part of their extra-curricular activities, and Prep school pupils regularly visit the animals as part of their working day. In addition to an orchard, there is a small allotment with various vegetables and herbs and there is a continual rotation of sheep, goats, pigs, chickens and ducks.

In 2020, 64.5% of A Level grades were A-A* and 27.8% were A* grades; BTEC Sport students celebrated with 90.9% D* grades. 84% secured their places at their first choice of university, and 70 students went on to Russell Group universities including Bristol, Cardiff, King’s College (University of London), Leeds, Manchester and York.

Hurst has a beautiful campus in a quiet, countryside location. An 1850s chapel is at the heart of the school, and classrooms and facilities including art studios, specialist science laboratories and a lecture theatre sit around a central quad. There are also design & technology workshops, several IT suites and a three-storey library building. Students eat meals in a traditional dining with wooden benches and historic flags hung from the high walls.

Hurst offers flexi boarding and weekly boarding, up to six nights a week, as well as offering day places for all ages and a ‘part day’ for the very youngest years.

There are 12 boarding and day houses for Senior School and Lower Sixth students. Hurst has a unique Sixth Form house structure where students spend the Lower Sixth as senior members of the main school houses, then move to a single, co-educational house in the Upper Sixth called St John’s House. With its individual rooms and ‘halls of residence’ feel, St John’s helps to prepare students for the more independent lifestyle of university but with 24 hour support and care from Hurst’s pastoral team.

Students must sit the ISEB Common Pre-test in Year 6 to start in Year 9 (aged 13). These are in English, mathematics, verbal and non-verbal reasoning. For entry into Year 7 (aged 11) the same tests apply. There is an additional writing task as well as interactive tasks in science, games, and design and technology.