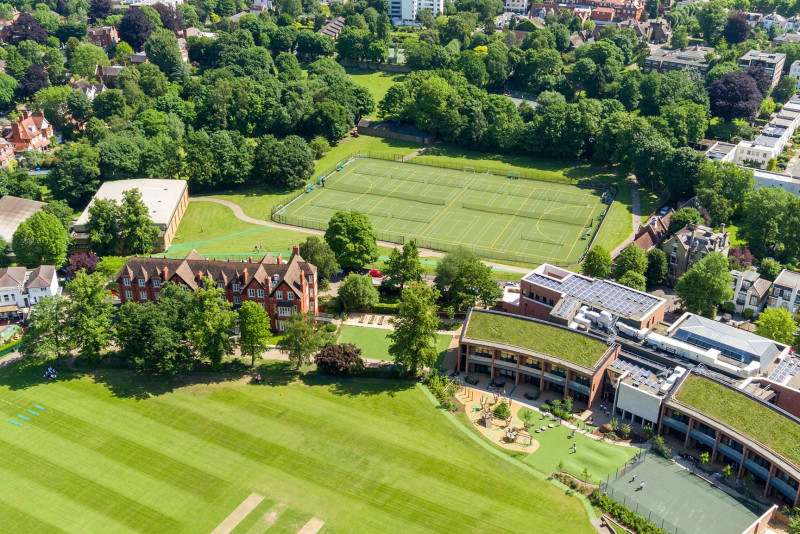 This North London day school is a popular, academically rigorous all-through school that places huge value on the enjoyment of learning, helping others, and caring for the environment.

Highgate School in London is a co-educational, independent day school for students aged three to 18 that has really come to the forefront of private education in recent years. A high-performing, challenging and academically rigorous school, Highgate has an excellent academic record. But it's perhaps the school's commitment to giving back to the community, work within the state sector, outstanding facilities, and grounded students that can explain why the school is so heavily oversubscribed – and why it has been the winner of numerous awards in the past couple of years.

Highgate is a large school for nearly 1,500 students. It was founded in 1565 by Sir Roger Cholmeley as a grammar school “for the most liberal education of boys”. In 1880, the School House was built to accommodate boarders and in 1993 girls were admitted to the pre-prep only and boarding was phased out; the last boarders left in 1997. In 2004, girls were admitted to Sixth Form and later to all year groups.

Highgate is a highly academic school offering Pre-U, A Levels and I/GCSEs. It has a Christian foundation which is inclusive with multi-faith assemblies and weekly talks from speakers from all religions; 25% of students are Jewish.

Adam Pettitt MA Oxon has been Headmaster since 2006 and is a modern and medieval linguist. He taught French and German at Eton, Oundle and Abingdon and was second master at Norwich School. He firmly believes that school should provide a happy environment where students enjoy themselves but, equal to that, “Employability” is an essential trait to acquire at school. He leads by example, and students are not arrogant or entitled but driven and happy.

Languages are strong here with a 'carousel' of French, German, Mandarin, Russian and Spanish and all pupils learn Latin. Ancient Greek is also on offer for the more “enthusiastic” linguists. The English department has three published writers teaching and an author in residence.

Although this is a highly academic school, the Head firmly believes that it is not exam-led and reading, and creativity are extremely important. Students take three sciences, mathematics, English literature and language and one modern language. They all take 10 I/GCSEs so the choices are from art, classical civilisation, computer science, design technology and engineering, drama, geography, Greek, Latin, history, a second Modern Language, music and RS.

Are you a parent, teacher or student at Highgate School?
Take a survey arrow_forward

With regular musicians, poets, artists and actors in residence who teach A Levels, bandstands for busking, two Sixth Form common rooms and coffee bars and the top floor of the library dedicated to Sixth Form there is plenty of Sixth Form fun, as well as academia.

The Extension programme in Year 12 gives an insight into undergraduate work and students also undertake the Critical Method and the EPQ. All students study four A Level subjects and a significant number carry four on to Year 13.

Extra Subjects offered for A Level are ancient history, economics, history of art, further mathematics, philosophy, politics and product sesign. Pre-U is used for most Modern Languages (it is not offered in Russian). Highgate believes that Pre-U modern languages, in Mandarin, French, German and Spanish are a better alternative to A Levels because there is a greater emphasis on immersion in authentic language and culture, a broader cultural content and there is a greater differentiation at the top end, with a grade D1 being beyond the A* of A levels.

40% of Highgate linguists achieved this grade in 2019; it is beneficial for those applying to Oxbridge or applying to study languages at university because the essays on cultural and discursive topics are longer than at A Level.

The drama studio has black-out blinds and a good lighting and AV system. Drama productions often take place at RADA. It is a popular subject at Highgate and there are regular theatre trips, workshops and talks from industry members.

The Mills Art and Design centre offers studio and gallery space, printmaking, sculpture, pottery and filmmaking and it also has an IT suite for graphics and computer aided design and a photographic darkroom. It has design and engineering workshops with a 3D printer and laser cutters. In addition to this, there is an electro-pneumatic laboratory and an automotive workshop.

With John Rutter as a former pupil, it goes without saying that choral music is extremely strong here with six choirs, ranging from sacred music to musical theatre. There are also five orchestras and three ensembles.

Alexandra Palace is used for the house singing competition and there are musical trips, events and performance opportunities galore. It also has an innovative rock, pop and rap department and pupil producers, singer/songwriters and rappers produce their original tracks. This department offers fabulous workshops such as a DJ workshop with DJ Shorty and music industry mentoring sessions with Nick Worthington.

Students in Years 10 and 11 have fortnightly academic lectures to introduce subjects such as philosophy, economics, history of art and politics, which are subjects that they might be considering for A Level. Other talks have recently been on evolution and the Israel/Palestine conflict.

The activities on offer are plentiful, interesting and fun and include origami, Chinese studies, debating, sign language, bee keeping, 3D animation and more with a total of 150 clubs. Outdoor education is thriving at Highgate and unique when it comes to many other London day schools.

Activities such as firefighting, shelter building and environmental awareness often take place in the newly installed outdoor classroom. CCF is offered here and run by older students, school staff and it also has some assistance from the army.

Highgate, along with Tottenham Hotspur Football Club, sponsors The London Academy of Excellence, a state sixth form college founded in 2017. Eight teachers from Highgate teach at the Academy regularly. Highgate takes its volunteering seriously and the Headmaster says “our charitable ethos is an inextricable part of both staff and pupil DNA``. It has partnerships with 50 state-maintained schools. It also supports a school in Uganda and, delightfully, has its own centre in Snowdonia, Wales which students use for the Duke of Edinburgh award scheme.

In 2020, Highgate won the Careers and Employability Programme from Rate my Apprentice Awards. Practical employability advice and guidance is “embedded” throughout the school curriculum, and it has extra Employability Days. Lunchtime Futures Forum sessions include topics such as “How to get hired’ and “Digital profiling”. There are careers talks galore, and the annual Careers Fair exemplifies how seriously Highgate takes each student’s future employability.

The Senior School is in the heart of Highgate Village. It combines Victorian buildings such as the chapel and the library, with modern facilities such as the 200-seat auditorium and its high-tech ICT suites. The new Mills Centre for Art and Design has fantastic facilities, but what really stands out are the grounds, beingso close to Hampstead Heath and extensive for a London school.

Highgate is oversubscribed at all entry points. It is highly selective. 100 students move up from its junior school and 80-plus join at 11+. Examinations are in English, mathematics and non-verbal reasoning. A reference is also required from the current Headteacher.

About fifty per cent of the new pupils are from state primary schools and around 600 students apply for these places. One third get interviewed. Rare places come up at 13+ and again, at Sixth Form around o120 students apply for between 35-50 places. 50% come from state schools. There is an assessment day with examinations in their chosen A Level subjects and interviews.