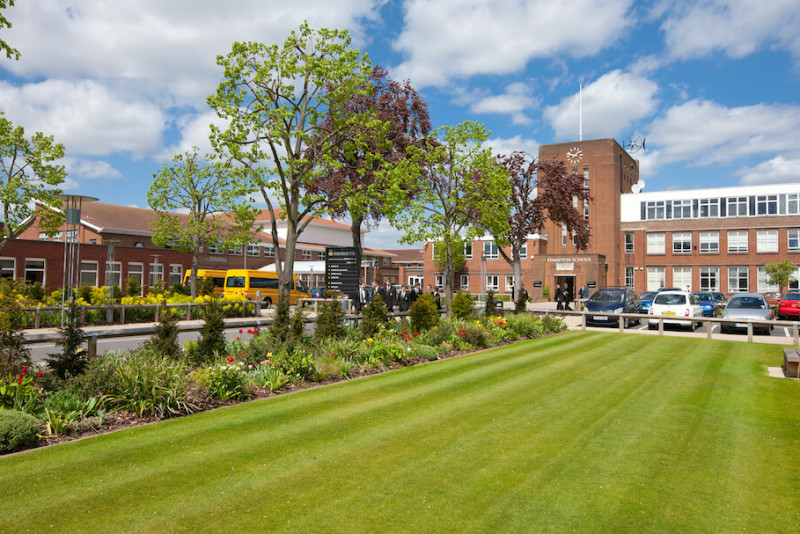 This all-boys day school in Middlesex has plenty of achievements to be proud of as one of the top rowing schools in the country, a high-performing school for both GCSEs and A Levels, and a pioneering school for mindfulness and pastoral care.

Hampton School is an independent day school for boys aged 11 to 18 years in South West London well-suited to students with both academic and sporting ambition.

Hampton School was established in 1557 as a grammar school and changed into an independent school in 1975. It is part of the Hampton School Trust, which offers private schooling to children aged three to 18 years across South West London, Surrey and Berkshire. It's a mid-sized school with around 1,300 boys.

Built on grammar school traditions, Hampton offers a very well-rounded education that can boast both academic rigour (79% of all A Level grades were A* and A in 2019), sporting achievement (it is a top school for rowing) and an enviable co-curricular programme (the school's beekeeping club is about to launch its own Hampton Honey). As well as having a reputation for inclusivity – it aims to provide 100 completely free places by 2025 – Hampton takes social responsibility very seriously; over 200 Hampton boys regularly volunteer at local primary and secondary schools, for example.

While believing strongly in the strengths of single-sex education, the school is working increasingly collaboratively, especially at Sixth Form level, with a neighbouring all-girls independent school.

Headmaster, Kevin Knibbs, joined Hampton as Deputy Head in 2007 and became Head in 2013. He read Modern History at Oxford. He describes the school as incredibly lively, fun, friendly and unpretentious. He is also proud of Hampton being unashamedly academic.

Teaching is in mixed ability classes with a small number of students attending a maths 'extension' class. The boys’ study for a combination of GCSEs and IGCSEs and all sit 10 subjects. Only Latin is sat early, in the Fourth Year.

All students take four subjects in the Lower Sixth, with three subjects being taken at A Level. Physics, Chemistry, History, Philosophy, German and Mandarin are currently offered at Pre-U, although this qualification is due to be phased out.

Hampton firmly believes that A Levels currently offer the best post-16 education model due to their challenging content and Sixth Form specialisation. The school “continuously keeps abreast of developments, assessing and examining the educational and examination options” to ensure that Hampton retains its huge academic success. Therefore, there is no IB offered here - and no plans to introduce it.

Hampton is one of the top schools in the country for football, rugby and rowing. The Millennium Boat House is home to two of the most successful school rowing clubs in the country, and over 200 boys (from Hampton) and girls (from the all-girls Lady Eleanor Holles School) row each year.

There's a wide choice of sports offered alongside the traditional, including fencing, golf and skiing, and the school typically competes in over 1,000 fixtures across 18 different sports every year. Facilities match the school's sporting enthusiasms and talent, and include an all-weather 3G sports ground on site, which means no muddy kit to wash, alongside playing fields and courts. Boys only need to venture off-campus for the school's shared boathouse, located rather idyllically on the River Thames.

Music is taken seriously here, and many boys learn more than one instrument and a large number achieve grade 8. It has rock bands, jazz bands, 23 music ensembles and a male voice choir called Voices of Lions which performs at the Edinburgh Fringe Festival. The state-of-the-art Hammond Theatre seats 380 people and has a hydraulic orchestra pit as well as high tech lighting and sound systems. Drama productions are plentiful and outstanding.

There's a busy calendar of arts events in a typical year, with around 40-plus concerts, drama performances and recitals.

Hampton offers an array of clubs, from beekeeping to chess. The Duke of Edinburgh's Award scheme is popular, and the Adventure Society offers a wonderful choice of kayaking, power-boating, and sea-cliff climbing.

Business courses and the national Young Enterprise scheme are taken seriously at Hampton too, with two-day business courses for the Fourth Year boys alongside girls from Surbiton High School; Lower Sixth Formers attend a three-day business course. They learn about crowdfunding, personal branding, job applications and the use of social media in business and networking. These are wonderful forward-thinking opportunities and exemplify the school.

Hampton has strong links with its neighbouring school, Lady Eleanor Holles for girls. Together, they share drama productions, language exchanges and Oxbridge interview preparation. They also share Sixth Form Curriculum Enrichment lessons in photography, cookery, DIY and more and on top of this they hold joint lectures.

Both schools firmly believe that single sex education is a solid way to get the most out of their students but that teaming up gives them “the best of both worlds”.

While there's no house system here, there's certainly no shortage of pastoral care, community spirit and healthy competition. As one of the first UK schools to pioneer mindfulness practice in education, Hampton puts student wellbeing front and centre. Mindfulness is taught for nine weeks as part of the curriculum in the Fourth Year, (there are six qualified mindfulness teachers at the school) which the Head feels is extremely important, especially in such a high-achieving setting. Boys are supported by a pastoral team (that includes a form tutor and head of year) and a Sixth Form mentoring scheme.

The school's ISI report found that the “Spiritual, moral, social and cultural development of the pupils is excellent”.

Whole school assemblies take place on Monday mornings, consisting of a presentation, usually on a theme of moral, social or global interest. These talks are often given by visiting speakers. After the talk there is time for spiritual reflection, either with silence, guided meditation, prayer or a reflective talk. Spiritual themes explore all faiths, and the ethos is one of “perennial spirituality”, aiming to offer “nourishment to all”. Once a year the whole school goes to Hampton Parish Church, where the school was founded, to celebrate its early roots, in a special service of thanksgiving.

Are you a parent, teacher or student at Hampton School?
Take a survey arrow_forward

Students are expected to “develop a commitment to public benefit values” and they assist at local schools, take children with learning difficulties on school trips, host a Christmas party for senior citizens, and have a strong link with the Hampton School Safe Haven in Malawi.

Hampton is a top-performing academic school. In its most recently published results for 2019 (the last year that exams were sat), 79% of all A Level grades were A* and A and 91% of all I/GCSE results are at grade 9-7 or the equivalent A*- A. In that year, 28 students received Oxbridge offers.

Surrounded by countryside, the school has excellent facilities on campus, as well as the Millennium Boat House situated nearby on the River Thames.

Hampton has three dedicated IT suites, two design technology workshops, and three science laboratories. Networked computers run throughout the school, which means that the boys can access their work anywhere on site. The library is large.

Hampton is a highly selective school with more than six applicants per place. It does not have a sibling policy. There are 125 places at the 11+ stage and the majority come from Hampton Prep School. 54% join from state primary schools. There is a smaller intake at 13+ and a very small intake into Sixth Form.

The entrance examination at 11+ is the school’s own one in Mathematics, English, Verbal and non-Verbal reasoning. If joining at 13, boys must sit a pre-test when aged 11 as Hampton does not use Common Entrance scores.

For Sixth Form entry, a personal statement, the current Head’s report, written and online assessments and an interview, and a minimum of six GCSEs grades 9-7 are required. These must include English and Mathematics.

There are currently 55 boys are on completely free places, and the school aims to increase this to 100 by 2025. Scholarships are awarded in Academic, Art, Chess, Choral, Music, Performing Arts and Sports.