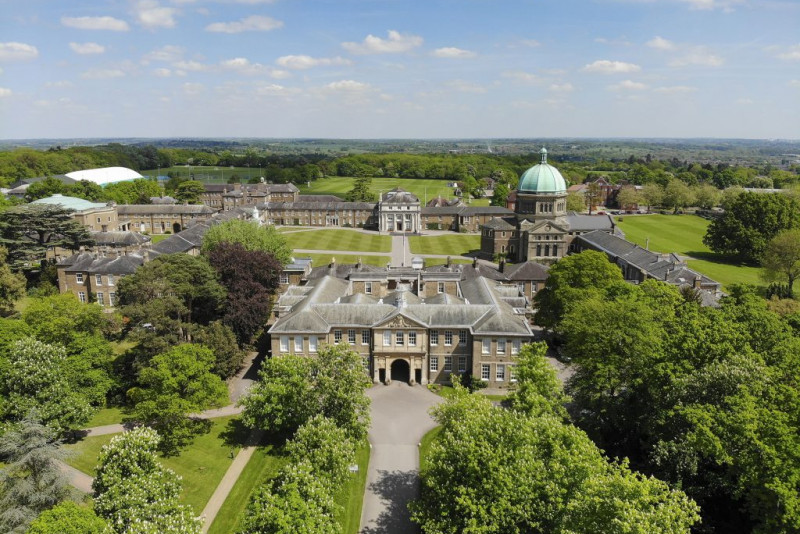 Predominantly a boarding school, Haileybury is spread across a spacious 500-acre estate in Hertfordshire. As well as offering the choice of A Levels and the IB Diploma, this co-ed school has a reputation for sport, music and service.

Haileybury School is an independent school near Hertford in the Home Counties. It is a co-educational school with over 850 boarding and day students who can choose between A Levels and the IB once they reach the Sixth Form. Over two thirds of students are boarders; girls were admitted in 1973.

This school is steeped in history and the neo-classical buildings and grounds are extremely picturesque. It is particularly proud of its military heritage and it has a long association with the British Armed Forces. It is a Christian school (but welcomes people of all faiths and none) with daily Chapel services, three voluntary Communion services per week and several Sunday services, open to parents.

The previous institution at Haileybury was the East India College and William Wilkins, the architect of Downing College, Cambridge and the National Gallery in London, was appointed principal architect. The Quadrangle is considered the largest in Europe and the domed Chapel, built in 1877, boasts beautiful stained-glass windows. The Memorial Hall, the school's dining hall, was opened by the future King George VI and Queen Elizabeth and, until the 1990s, the entire school of over 700 students dined there at a single sitting.

Martin Collier has been Headmaster at the school since 2017. Having graduated with an MA in Modern History from Oxford University, Mr Collier’s previous roles include Headmaster of St John’s School, Leatherhead and Second Master at Oundle. Since taking the helm at Haileybury, he has changed the timetabling amongst other things, and results have improved under his leadership. He is said to be quietly authoritative and much liked by the students.

Haileybury has expanded overseas in the past 15 years. In 2008, it opened Haileybury Almaty in Kazakhstan, which follows the same curriculum and teaches all English GCSEs under the guidance of the school. In August 2011, Haileybury Almaty opened a Sixth Form. The student body is made up mostly of Kazakhstan citizens aged five to 18 who are all required to speak English. A second school opened in in Kazakhstan in September 2011. Haileybury Astana provides an education for boys and girls from the two to 18 years of age and follows the IB programme under the leadership of Headmaster John Coles.

All students study English, Mathematics and Sciences as well as a series of language and linguistics courses. By the end of the Lower School, all students will have studied Latin, French, Spanish, German and Greek. They also study History, Geography and Theology & Philosophy.

In Middle School, students also follow an Extension Curriculum, which includes a Global Awareness Project that encourages students to “think, challenge and probe”.

Students take IGCSEs, with a wide choice of tradition and newer subjects, before opting to study the IB Diploma Programme or A Levels. There is a decent choice of subjects, with French, German and Spanish options for modern foreign languages.

Students entering the Sixth Form must achieve a minimum of six GCSEs at Grade 6, and international students must sit a UKiset test. There are usually about 70 new students in the Sixth Form, including around 40 international students, and it is oversubscribed with three applicants for every place. Prospective students undertake Verbal and Non-verbal Reasoning tests as well as a choice of two academic subject papers. The usual interviews, reports and so on follow after successful examination results.

All students are screened on arrival to “understand how they learn”; learning support, if required, is an integral part of an education here.

The Rackets Court has a double gallery and coved ceilings which cannot be seen anywhere else in the world, and its walls are made entirely from marble. Its coaches are top notch – a former Wales and Lions captain coaches rugby – and many students represent their county in a variety of sports.

Are you a parent, teacher or student at Haileybury School?
Take a survey arrow_forward

There are four co-curricular drama performances per year and students can get involved behind stage working in lighting, sound and prop making. Although the theatre is not big, most students still get involved. Art has its own purpose-built building which offers 2D and 3D printing, ceramics, photography and textiles.

The recently extended music school boasts recording facilities, a technology suite, individual and larger performance spaces and music is excellent and taken seriously here. Some students are lucky enough to attend junior departments at the Royal College, the Royal Academy and Guildhall as well as some being members of national ensembles such as the National Youth Orchestra and National Youth Choirs. Haileybury believes that music should be a “whole-school endeavour”, starting with singing “with gusto” every morning in Chapel

It almost goes without saying that service and teamwork are fundamental to the ethos of this school, and the CCF here is particularly strong. It is run along military lines and dates back to 1886. It comprises all three sections of the armed forces and there is a weekly parade, as well as two Field Weekends per year.

In Year 9 there is a unique programme called Coghill where students learn a range of skills including first aid, navigation, swimming survival and more; it’s an exciting Outdoor Education alternative to CCF. Students can canoe, mountain bike, climb, learn self-defence camp and go on expeditions. The Duke of Edinburgh’s award scheme is also very popular at Haileybury. This is a lively and busy school where students have plenty of activity choices.

The list of clubs is extensive and include Mandarin, Italian, Genealogy, Investment, Photography, Triathlon, Drama, Art and Technology. If a student wants to set a new club up, this is encouraged. Many families choose Haileybury because of its extensive and integral co-curricular programme, which does its best to stretch students to achieve the best they can in every direction.

Haileybury Youth Trust, the school’s award-winning charity, has been working in Uganda since 2006, “transforming entire communities throughout the country”. It helps train Ugandans in carbon-saving building technology, giving them construction skills which improve their livelihoods.

Community Service is also important here, and the students do everything from helping out in local primary schools to running errands for the elderly. Haileybury is also very proud of sponsoring the local academy school.

Haileybury has 13 boarding and day houses for boys and girls, as well as co-ed Lower School houses. Around 70% of students board from Year 9 and quite a large percentage are weekly boarders. Flexi boarding is offered in Years 7 and 8.

Haileybury offers students a very beautiful, tranquil environment to learn. Set in 500 acres, the school has beautiful formal and informal gardens, sports pitches and grounds, with the remainder being woodland.

Haileybury is not currently assessing applicants using its own entrance examinations for Year 7, so all applicants must submit a piece of work “about which they are particularly proud”. In addition, they must submit a five-minute video presentation on a topic of their choice, and this will be followed by an extensive interview.

For children in Prep Schools and wanting to join in Year 9, Haileybury offers an earlier entrance procedure (the Early Tests); for general entry there is an online Cognitive Abilities Test in Verbal, Non-verbal, Quantitative and Spatial reasoning. This is followed by an interview and a submission of a piece of work. Reports from the current school and a reference are required.