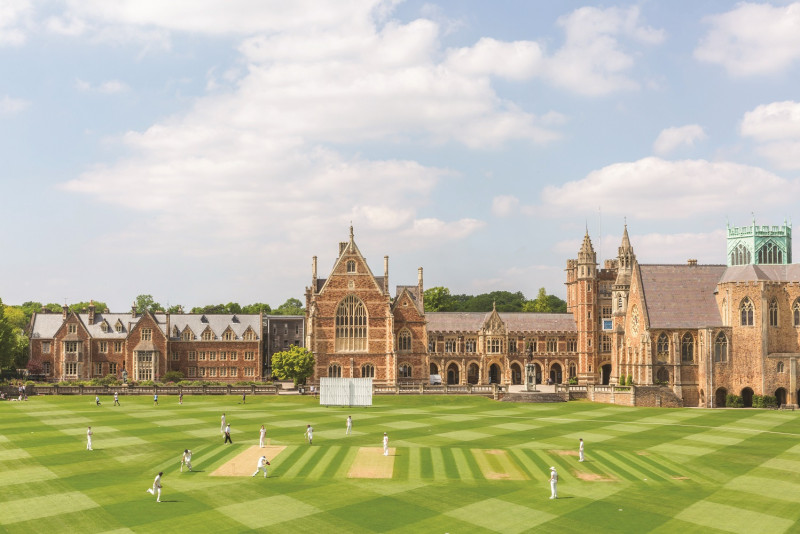 This day and boarding school in the South West city of Bristol offers a modern, forward-thinking education alongside a very strong sports programme.

Clifton College is a co-ed boarding and day school offering a modern, forward-thinking education that encourages students to “aim high and stay grounded”. It has a reputation for delivering high academic achievers, sporting excellence and a unique Jewish programme.

It’s a large school with 1,200 students aged two to 18 years; around 30% are boarders and 20% are from overseas. The Nursery, Pre-Prep and Prep School are on one site (right next to Bristol Zoo) and the Upper School is located on a huge campus (with plenty of wow factor) just a few minutes up the road.

Clifton College was founded over 150 years by Dr John Percival, a visionary headteacher with a strong belief in science, the education of women and racial tolerance. The school has retained this liberal and open-minded ethos, and students can expect to become part of a community that values individuality and celebrates inclusion. Students are encouraged to develop integrity, spirit and resilience – the school’s three core values.

The school’s wonderful heritage comes with some beautiful historical buildings that provide an inspiring backdrop for learning (and the Prep school’s view of Bristol Zoo is much loved by its youngest students), but as the school says, “everything about the education we offer is modern”.

Located in the heart of trendy Clifton, the school takes full advantage of the many cultural and educational activities on offer in the modern and vibrant city of Bristol, with plenty of countryside nearby. Students have so much exposure to culture and commerce, which as the school says, is “representative of the real world”. Don’t come here expecting stuffy traditions and an old-fashioned curriculum. Learning is all about independent thought, individualism, and intellectual risk-taking.

The school has a reputation for turning out academic achievers and Nobel Prize-winning scientists; Old Cliftonians include pioneering computer designer John Pinkerton, LP Hartley, scientific Nobel prize winners, mathematicians, philosophers and engineers. It is most certainly a centre of excellence for science. It has a dedicated science library, the Stone Library, with 5,000 scientific books, which is staffed by science teachers in the evenings.

Clifton is also renowned for its sporting excellence across a range of sports, for both boys and girls. And it delivers particularly well on pastoral care, which is built on a strong house system, weekly tutor meetings and supportive houseparents; a team of Sixth Formers also work as voluntary mental health peer supporters.

Clifton supports an active Jewish community within its school, and its longstanding relationship with the Jewish community goes back to the founding headmaster and the establishment of a boarding house for Jewish students in 1878. Today, Jewish students can attend the school’s own synagogue, receive Hebrew instruction and preparation for Bar Mitzvah. The Polack’s Scholarship is awarded at 11+, 13+ and 16+ to young people who are passionate about their Jewish heritage and identity, and there are plans to offer Modern Hebrew as a GCSE.

Head of College Dr Tim Greene was appointed in 2016.

Are you a parent, teacher or student at Clifton College?
Take a survey arrow_forward

In Pre-prep there’s a balance between specialist teaching and learning through play, and the school regularly buses the children off-campus to attend its wonderful Forest School run by a full-time forest school leader.

In Prep (Years 4–8), Clifton offers what it describes as a “stimulating and challenging curriculum”. There’s an early focus on a broad choice of both modern and ancient languages including Spanish, German, Hebrew, Mandarin, Latin, and Ancient Greek – which are all taught from Year 7 and most are offered up to GCSE and A Level. Languages are certainly a strength, and they are among the best performing subjects at both GCSE and A Level.

The focus is also on developing 21st century skills, so you’ll find students from as early as Year 4 constructing a Formula 24 electric racing car, designing and building a two-man hovercraft, learning to touch-type (it was one of the first schools to offer an exam in this), and designing computer games.

Reading is taken very seriously, and the Prep school library is described as the “beating heart of the school; the Hogwarts-style Percival Library in the Senior school is well-resourced with over 15,000 books and includes dedicated maths and science libraries. (There’s also a chance to view some rare books including a first edition of Darwin’s On the Origin of Species.)

Most students move on to the Upper School where they study for GCSEs and then A Levels or a BTEC. The focus is very much on preparing student “for the real world”, and the curriculum’s emphasis on science, IT and foreign languages certainly helps to achieve this.

In the Sixth Form, there’s a choice of A Level and BTEC subjects (currently 39 options) with most students choosing four options for the first term of Sixth Form, and narrowing this down to three by the second term. Students can also choose from a range of enrichment courses including LAMDA, photography or another modern language, as well as the Extended Project Qualification.

The most popular subjects taken through to A Level are maths, the sciences, and humanities; there are some less traditional options though, including sculpture, PE, photography and philosophy, as well as BTECs in sport, business, applied psychology and IT.

Clifton follows a six-day timetable, and Saturday mornings have either timetabled sports coaching and fixtures for Years 4 to 8 or an extensive enrichment programme for Years 7 and 8.

This school is excellent when it comes to the arts, including theatre, dance, visual arts, and music. The facilities and courses are there to foster the incredible talent that comes through this school. There is a fully equipped recording studio with two live rooms, a dedicated drum room and a central control room; a recital hall with a Yamaha Grand Piano, and a full-time sound engineer who teaches music technology.

The school also has a theatre that hosts more than 40 musicals and productions every year; the professional Redgrave Theatre (named after alumni and actor Sir Michael Redgrave) was one of the first theatres to be built in a UK private school. It works closely with the Bristol Old Vic Theatre, the Bath Theatre Royal, RADA and Shakespeare’s Globe in London.

Students can sign up to a broad choice of co-curricular groups from traditional Chapel and Chamber Choirs and Orchestras to pop, swing and soul bands. There are also whole-school events including the annual House Singing Competition.

The main sports on the curriculum are rugby, netball, cricket and hockey.

As the school says, part of the ‘Clifton Experience’ is taking part in some of the many activities on offer, which covers all interests – sport, the arts and hobbies. Fun clubs such as drama or karate get children involved from a young age (Year 1), and there are some more unusual options including skateboarding, DJ club, hula hooping and stained glass.

Life is busy, and there’s a balance between lessons, sports, the arts, outdoor pursuits, clubs and community work that helps to deliver well-rounded students.

Each year, the school has a small handful of Oxbridge offers; this peaked at 12 in 2019 and was a much lower three in 2021. The main leavers’ destinations are Russell Group universities including Imperial and University College London, and around 10% of the Upper Sixth go on to universities outside the UK.

Like many UK independent boarding schools, Clifton now offers the choice of flexi and full boarding places. There are seven single-sex boarding houses (four boys, three girls) and students can board from Year 4; unusually, Clifton does not have a dedicated Sixth Form house and all upper school students board together instead.

Just like boarders, day students are assigned to a House, where they have the same access to tutors, a matron and a Housemaster/Housemistress as boarders.

Clifton brings together modern facilities with traditional 19th century architecture, and students are very fortunate to have some excellent specialist facilities including the Joseph Cooper Music School, Redgrave Theatre, and Stone Library.

There are scholarships for academic, art, drama, music and sport at 13+ and 16+, as well as an Organ Scholarship, and Polack’s Scholarship for Jewish pupils (at 13+ and 16+). The school also has means-tested bursaries, including fee reductions for Forces Families.

Good for: There's plenty to attract parents to the school – its choice of academic and vocational pathways with huge range of A Levels, excellent sports offering, and unique Jewish programme. Whether joining as a day or boarding student, families can expect their child to quickly become part of the inclusive, welcoming and friendly community here. Clifton College offers the facilities, support, expertise and subject choices to bring out the potential in children, whether sporty, academic or arty.

Not for: The school has a Jewish programme, although religion is not forced upon any student and it is a school for all faiths and none. It can't compete with many countryside schools just a few miles away when it comes to acres of land, but it does have an excelled location and very well-equipped campus for all ages.