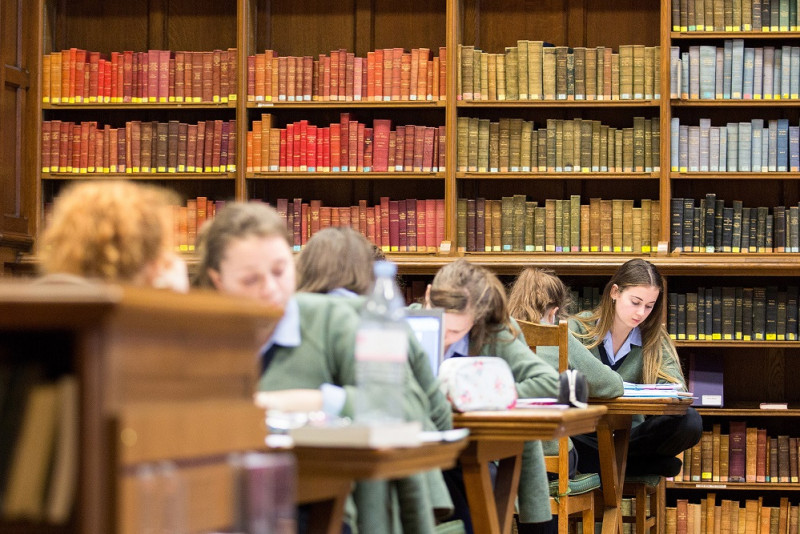 Cheltenham Ladies’ College is one of the best known of all-girl English independent schools in the world. Approximately 75% of pupils are boarders, increasingly coming from all over the world.

Cheltenham Ladies’ College is one of the best known of all-girl English independent schools in the world.

Predominantly a boarding school, it nevertheless welcomes 25% of its students as day pupils, this in part grounding the school within the life of its home town of Cheltenham. It has a very high international intake of pupils, some 30%, 10% of which are British ex-pats.

The resulting student mix is cosmopolitan and seen as a core strength of the school as is its ambition to broaden the experience of its pupils.

Cheltenham’s strictly girl only philosophy is integral to its ethic; the College openly proclaims it will never change this approach because of its ability to offer “breadth of opportunity, lack of inhibition and depth of enthusiasm for learning -” boys and girls simply learn differently.

The College is proud of its formidable strength in Science, but its investment in teaching across the board – and the one of the very highest staff to pupil ratios in British education, demonstrates the genuine, significant investment the school makes in ensuring every student meets her potential. It is a major slipstream to Oxbridge with 19 students successfully securing places in 2013.

Cheltenham was rated Excellent in its most recently available ISI Educational Quality report (2014).

The College has been described as “the girls’ Eton” and it is certainly true that the College’s more cosmopolitan but traditional single-sex educational approach to developing the whole child has more in common with Eton than to its other blue chip stable mates of Winchester, with its rigorous academic approach, or Westminster’s somewhat more radical Liberalism. The college has been a pioneer of the International Baccalaureate and has moved almost entirely where subjects permit to the Pre-U.

Cheltenham Ladies’ preferred entry is at 11. 70 places are available and an optional early assessment interview, which includes tests in reasoning, mathematics and creative writing, is available to determine whether children are likely to meet the academic requirements of the entrance exam and secure a conditional place.

Mainstream entrance at 13 offers 50 places, and entrance is dependent on passing the College’s own tests in reasoning, mathematics, verbal reasoning, science and modern languages.

35 places only are available at 16 for Sixth form entry and entrance is also by the College’s own entrance exam and interviews. 6th form entry is said to highly competitive – this is when all parents want to send children to the school.

Are you a parent, teacher or student at Cheltenham Ladies College?
Take a survey arrow_forward

In some cases an option is available to sit ISEB common entrance, but the school is insistent on asking students not to prepare for exams as in all cases they are seeking potential and a good fit for the pupil which can be masked by preparation. Past papers are not made available. Scholarships, offering between 5% and 15% fee remission, are available annually from age 11 and involve up to 2 full days of interviews and testing. Bursaries are available up to 100% fee remission, but are limited. The school is committed to expanding its aim to welcome children who will flourish regardless of means, but the significant investment in teaching and the College’s class leading staff-student ratio for existing pupils, pulls the College in opposing directions. Bursary funds are advertised as available, but limited.

The College is blue chip in examination performance league tables but its whole child approach is reflected in its lower scoring than St Swithun’s and Wycombe Abbey which are much more targeted and selective. Cheltenham Ladies is a recognized slipstream to Oxbridge with 19 girls securing a place in 2013. The College is unique in protecting many of the academic attributes of the closed single-sex, all-boarding schools but only to a point – the cosmopolitan international intake, significant day pupil presence and investment in staff are part of a whole child approach that measures success equally in ethics, personal values and empowering its girls with mutual respect in the exchange of ideas.

There is said to be no typical Cheltenham Girl; with an intake from 40 different countries, speaking 30 different languages, whilst its examination results rank high in the league tables, entry, and graduation, is firmly driven by potential measured in individual character and academics in equal measure.

Geographically, Cheltenham Ladies’ is rooted in its town and engagement with the community, particularly in charitable works, is “not an added extra” but central to its approach. This is, however, balanced with the reinforcement of tradition and discipline; pages have been filled (by Cheltenham Ladies) discussing the archaic and somewhat unflattering dress codes imposed by the College for its pupils and they are certainly distinguished from their peers in the town from other schools.

This said, Cheltenham Ladies’ is significantly less traditional than even a decade ago and the College is known for its attempt to balance the benefits of structure and history with the needs of modern women; it is certainly more Liberal than much of its blue chip competition. Day pupils are happier post 16 as there is inevitably a sense of “losing out” to the extended opportunities open to boarders; in the Sixth Form this is evened out as the girls’ freedoms to engage with the town are increased and pupils shared experiences better coalesce.

With 30% of its pupils draw from overseas, Cheltenham offers extensive support for children for whom English is not their first language, but its approach is targeted individually and there is no spate learning centre. It also has advertised SEN support for those with mild to moderate dyslexia and dyspraxia. Again, however, its focus and demand is for those who have the clear potential to follow and excel within the existing curriculum.

Sports provision is extensive with 30 individual sporting disciplines on offer but there is an emphasis on horse riding, lacrosse, netball and polo within which the school competes.

Cheltenham Ladies’ College provides an exclusive, traditional, all-girl independent school education. It does this however with important ‘twists’ that stem from its commitment to a sizeable day presence, rooting all its students in the life of its home town, and an unusually significant intake of international students. Its academics are first class, but not at the cost to this wider educational approach that recognizes its pupils are part of the ‘bigger world’ outside its walls. This approach has seen the College embrace the International Baccalaureate and Pre-U, not least because of the greater breadth and sweep of study these offer its students over the much more limited and focused A’ Level curriculum.

For parents who share a belief in the value of an all-girl education, who value tradition and academic success but when balanced with development of character and emotional intelligence, Cheltenham offers the prospect of the perfect school. For international students, there is not a better choice of girls’ school in Britain. For day pupils, who can absorb all the tradition, the boarding ethos and international presence, whilst also returning home to their parents, it is hard to imagine a more valuable mix. For parents whose children require more than moderate SEN support, however, or whose child’s academic needs require more intensive support, there are better schools, and no amount of reputation or success in league tables should distract parents from looking elsewhere.

Not for
Seekers of the most traditional all-girl, all boarding school
Seekers of a non-traditional Liberal independent school education
Pupils whose talents are exclusively non-academic