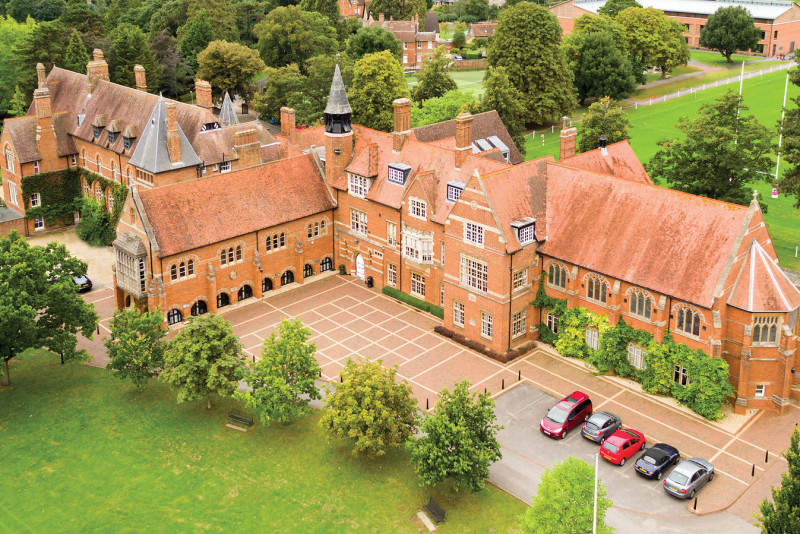 This academically outstanding day and boarding offers an excellent education to bright, hard-working boys that is brilliantly balanced with an extensive extra-curricular programme that promotes its ‘Other Half’ philosophy.

Abingdon is a large day and boarding school in Oxfordshire for around 1,300 boys aged 11-18; Abingdon Prep School is a smaller day school for boys aged four to 13.

Abingdon has a glorious campus of 35 acres in the centre of Abingdon, just south of Oxford. There’s a large community of around 1,000 boys at Abingdon and a further 250 boys at the Prep School, which is just a few miles away at Frilford.

It’s an academically selective school, and one that “believes very firmly in stretch and challenge”. Boys should come expecting to work hard and apply themselves, but also to try new things and take risks. While it’s a large school, small tutor groups of 10-12 students ensure that every boy is known and the teacher student ratio of 1:9 really helps boys to feel personally supported on their pathway to university.

There’s a diverse, international community of students here, with boys coming from 25 different countries. The majority are day students and every boy belongs to a houseroom where they have games rooms and sofas to help them unwind after a long school day; it’s one example of this school’s nurturing ethos.

Boys coming into the Lower School (equivalent to Years 7 and 8) are offered an easy transition into senior school; it’s very much a ‘school within a school’ with a small, friendly vibe that helps boys to get settled quickly. In the Middle School there’s a brilliant insight into school life written by the students for the students.

It’s a school with great personality, and one that feels down to earth. There’s no snobbery here as Abingdon lets its students ‘sell’ the school across its website with page after page of video testimonials – and there are some great bios of the many highly qualified teachers.

Abingdon is a strong advocate of single-sex education, but it also has close ties with the nearby girls’ school of St Helen and St Katharine to teach some subjects jointly and to collaborate on drama productions and musical activities, particularly in the Sixth Form.

Abingdon sticks with a traditional curriculum, one that it believes is a tried and tested (and effective) method of education. While Abingdon is a traditional school – its history dates back over 750 years – it is also one that sees the value in investing in modern teaching facilities; the new Yang Science Centre with 21 teaching labs and project rooms, library and art school are examples of this.

Are you a parent, teacher or student at Abingdon School?
Take a survey arrow_forward

At GCSE, Abingdon offers 13 subjects. There’s a choice of 23-25 subjects in the Sixth Form (A Levels for most subjects and the Pre-U for Modern Foreign Languages); some Sixth Form lessons are taught jointly with the neighbouring girls’ school, St Helen and St Katharine. Abingdon offers flexibility so that boys can choose the subject combination that’s right for them.

Languages are important here. All students study French and German in the First Year and have the option to add Spanish and/or Mandarin in their Third Year; the school also offers Russian, Italian, Spanish and German express GCSE courses in the Sixth Form.

Private schools worldwide have a reputation for championing sport and the arts, whether that’s music, drama, dance, film, or art. While sport and the arts are not popular GCSE and A Level subjects, Abingdon does encourage creativity and performance. Around half the school plays a musical instrument; the school has its own Film Unit, the AFU, which has produced over 175 short films; and there are choirs, bands, orchestras and chamber groups open to both the boys and their parents. Activities such as a podcasting club, theatre design workshops, modern foreign language plays and annual drama productions are all part of school life. It all helps to keep Abingdon from becoming too academically-focused, and helps students to broaden their horizons.

The school has some fantastic facilities including a boathouse, swimming pool, and 450-seat theatre. Its sports hall is home to two squash courts, two fitness suites, a climbing wall, martial arts and fencing studio and rowing ergometer suite; there is also an athletics tracks and 4G pitch at the nearby Tilsley Park.

The school has invested heavily in its sports programme, and the facilities are widely used by both the school and the local community. Rugby, rowing and hockey are the school’s strengths, and boys will often be seen training or playing a match after school or on Saturdays; regular opponents include Radley, Bradfield, Wellington, Marlborough and Eton. There are also clubs for the less traditional sports of karate, canoe polo, fencing, cross-country, sailing and shooting, so plenty to keep any boy active.

Abingdon runs a huge extra-curricular programme fondly known as the Other Half, which encapsulates the school’s belief that “what a boy does in the classroom is only half of the reason he’s at the school and only half of what is going to be important to him as he matures”.

There are over 150 activities including 30 sports, 31 chamber ensemble group, film-making, bell ringing, croquet, CCF, the Duke of Edinburgh’s Award and debating. It’s all about giving the boys something that they enjoy and teaching them a skill that they will appreciate well beyond their time at Abingdon.

2021 A Level results: 47% of grades were A* and 94% were A*-B. There were the highest numbers of students taking the sciences, English, maths, geography, economics and history.

The majority of students receive places at Russell Group universities, including Durham, Exeter, UCL and Bristol, and there have been 40 Oxbridge offers in the past three years. The diversity of courses reflect the huge range of interests and abilities at Abingdon, although Social Sciences, Humanity, Physics & Engineering and Biological & Chemical Sciences are the most popular.

Full and weekly boarding is available from age 13, and there’s a small boarding community here of around 140 boys. This expected to grow as the school is currently building new boarding houses with extended study room facilities and social hubs, and single bedrooms for Sixth Formers; these will open September 2023.

The main points of entry are 11+ and Sixth Form, with boys coming from both state and independent schools. Entry to the Lower School is by interview and exams in Mathematics, English and Verbal Reasoning.

To enter Sixth Form, all boys (including Abingdon students) require an overall average of a 6 and a minimum of a 7 to begin A Level courses in that subject. It’s tough and very selective but boys who are unable to reach this “bar” will struggle with the “fast-paced and demanding way” that Abingdon teaches A Levels; such is the high standard of education here that the majority of boys continue from Abingdon’s Fifth Year into Sixth Form.