From Pancake Day competitions to running for a jar of marmalade, these are just some of the wonderful, quirky and unique traditions that have become part of school life in independent schools across the UK.
Oddest Traditions at UK Independent Schools
By Carli Allan 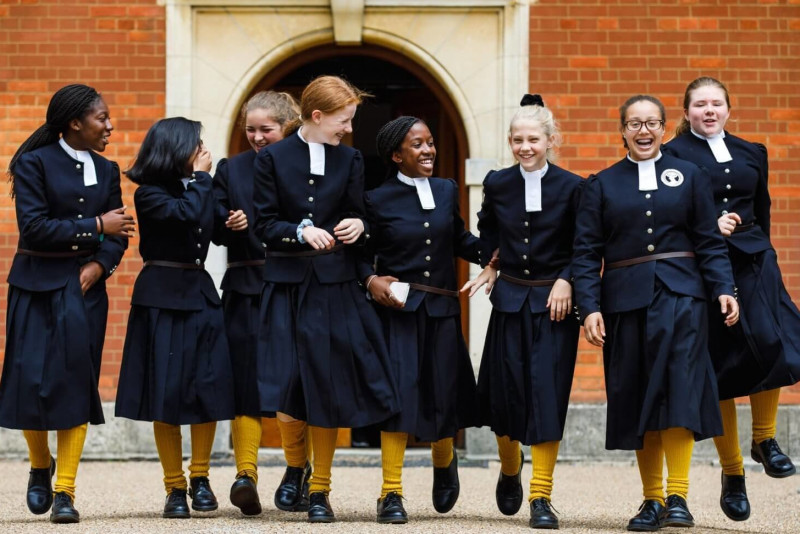 Playing the Wall Game at Eton College, wearing an original Tudor uniform at Christ’s Hospital (pictured above), and taking part in the Illumina Ceremony at Winchester College. These are among the many unusual and wonderful traditions that are celebrated in UK independent schools.

There’s a very British love of centuries-old rituals, and so it’s not surprising that traditions dating back to the founding of a school are held so dear by its students. Here are some of our favourite – and most unique and unusual – traditions that are kept alive across the UK’s leading day and boarding schools.

Here’s a school that has carved out its own identity – and moved with the times to adapt from a school for the sons of clergymen in the 1844 to a co-ed school for students from more than 30 different countries. It’s a school that’s built on tradition and continues to host events that date back over 150 years, such as the 12 Days of Christmas Sing-Off in the dining hall or the annual House Singing competition in Blackpool.

A special mention must be given to the school’s unique game of Ross Hockey, which was introduced more than a century ago when flooded playing fields forced pupils to take a short walk from the school to the beach to start up their own frantic version of hockey. (Apparently, Rossall won’t even challenge other schools to a game, the rules are so confusing!)

Click here to read our full review of Rossall School.

One of the oldest grammar schools for girls, this single-sex day school in Leicestershire continues to celebrate a unique tradition that has been established for over 100 years at the school. Students give a unique performance in the Tableaux Vivants (living pictures), which are held during the school’s annual Carol Service. Early religious paintings are recreated as girls ‘freeze’ in carefully composed groups which are captured using artful staging, lighting, make-up and costume.

One of the UK's oldest independent schools, Ruthin School is a high achieving small day and boarding school in North Wales. Students compete in the traditional annual Hill-Fort Run, a 6.5 mile run that challenges girls and boys to the reach the summit of summit of Foel Fenlli. The winner receives a jar of marmalade, which continues a tradition dating back over 100 years of  “a pot of marmalade from the school tuck-shop being the prize regularly given for competitive runs”. Such is their love of marmalade that the school has recently partnered with the Dalemain Homemade Marmalade Awards!

Click here to read our full review of Ruthin School.

Like so many of the UK’s oldest independent schools, Stonyhurst has some unusual traditions that have stood the test of time; for example, Year 13 cricketers challenge the students in Years 5 & 6 to a game of cricket every year – wearing fancy dress! Unlike many UK independent schools, Stonyhurst is organised horizontally by year groups (known as Playrooms, which comes from the emphasis placed on drama in Jesuit education) rather than vertically by houses, and each Playroom has a Playroom Master.

Click here to read our full review of Stonyhurst College.

Located within walking distance of Westminster Abbey, this highly academic school has a distinctive model of boarding school education. Pancake Greaze on Shrove Tuesday dates back to at least the 18th century and sees students competing to claim the largest portion of an enormous pancake tossed over the Greaze Bar (a metal bar about 20 feet off the ground) in the hall by the school cook. Students from each House scramble, to grab a piece of the pancake, and the student with the largest piece wins a guinea or sovereign from the school Dean.

Click here to read our full review of Westminster School.

Located in a beautiful rural Norfolk setting, this co-ed day and boarding school offers a broad and creative curriculum with academic and vocational pathways at Sixth Form. There are seven single sex boarding houses; a new co-ed day house for Sixth Formers will open in 2023. Each House has its own lovely traditions, our favourite being Tallis House 10k run to Sheringham for fish and chips followed by a “spontaneous dash for the sea”!

Click here to read our full review of Gresham’s.

Located in London, Hill House is a co-ed independent school for four to 13 year-olds with a strong Swiss connection. It oozes a certain tradition and old-fashioned charm that can only come from a family-run school. Students wear an unconventional uniform, which has evolved over the school’s history after the school’s founders Colonel and Mrs Townend once said, “a grey uniform produces grey minds”. Today, children wear iconic knee-breeches modelled on the Colonel’s climbing breeches, a ‘gold’ knitted jumper, and cravats.

Click here to read our full review of Hill House.

Oakham School is a secondary private school in the East Midlands with broad appeal and a friendly house atmosphere. In Form 7, their final year, girls move to Round House and boys to School House, where they experience a more university-oriented lifestyle and enjoy the opportunity to enjoy some treasured school traditions, from tea and cake on Tuesday afternoons to playing the century-old game of Quad Cricket. The game, captured on film as long ago as 1903 at the school, is still played by the boys to this day.

Click here to read our full review of Oakham School.