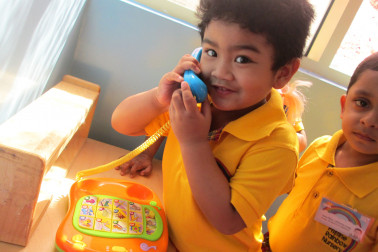 The Sheffield Private School is in the midst of significant change having appointed a new head two years ago.  The mainly young staff teach the British curriculum to students from more than 60 nationalities.  There is a sense from staff and parents that the school is now moving in a positive direction – optimism is in the air!

The Sheffield Private School (SPS) is situated in the Al Nadha area of Dubai close to the Sharjah border. The school is a fairly modern cream two storey u-shaped block, has regular square windows and two long arched windows either side of the entrance. A line of palm trees around the front of the block looks quite well established and softens the appearance of the frontage.

The school which opened in 2006 follows the UK national curriculum and caters for students from FS2 to year 13. We were greeted by security and when in the reception area were soon introduced to Mr Matthew Edwards, the school principal. Prior to joining SPS, Matthew was head of a secondary school in Bristol in the UK, where he started as an assistant head and where he worked for a total of eight years.  He is a mathematics specialist.

A passion for travel brought him to Dubai in 2014 along with a love of education and determination to develop and improve standards at SPS.  Matthew described the school as a melting pot of 61 different nationalities across staff and students. He believes it is a good community of individuals who work well together.  He wants to see the KHDA ratings rise as soon as possible to ‘Good’ as the school has been flatlining at ‘Acceptable’ for several years.  He described the drive as ‘a thrust to be awarded good’ and was pleased to inform us about the recent BSME accreditation awarded to the school.

Are you a parent, teacher or student at The Sheffield Private School?
Take a survey arrow_forward

Matthew feels that for the last two years academic standards have improved and that the school has a different feel.  Parents are happier and the whole culture has changed.  His biggest challenges have been to refresh and re-organise the structure of the school as further investment was needed.  He believes the school’s approach to the child is ‘holistic’ but that the KHDA want to focus on higher academic standards.

Within the school there is an anti-bullying policy and special sessions are dedicated to this area via the standard pastoral heads of year.  The school’s approach to homework is clearly defined with students and parents keen to see progress. Holiday homework is also included in this policy.

The whole school’s curriculum is as innovative as possible with staff support. We observed many creative wall displays and the community is developing a herb garden. To gain a place at SPS there is no entrance exam and the school is not selective.  At present there are no scholarships on offer.

When pupils leave SPS they generally return to study in their home countries which are usually Pakistan, India or Egypt. Teaching staff are fully qualified to KHDA expectations and are recruited by advertising in TES or other agencies around the world.

We noticed  there were many young staff, a lot from Ireland and a balance of male to female teachers.  Staff receive weekly INSET training with CPD on innovative lesson resources run as Carousel sessions.  There are three main lesson observations like senior leadership team who conduct daily ‘learning walks’ around the school.

Although some pupils are keen and talented in the arts generally parents want them to focus on academic success.  Matthew felt that the English department was the highest achieving area of the school.  Overall he believes that SPS is very successful for students who he feels are ‘well rounded’ by the time they leave.

He feels there is a real community ethos where different cultures and backgrounds are celebrated.  International Day, National Day and house events are highlights. The school also works with the local community.  Some senior pupils have visited and helped out with a charity in Sri Lanka. Others are tackling the environmental issues we’re facing today.

The school will soon be introducing the Duke of Edinburgh Award Scheme to encourage personal challenge and service.  Reading is a big focus for example year 9 students read with year 6 children and sixth formers read with the younger children.

We were pleased to meet Hina Kapadia who led the English department before being promoted to vice principal of the school. The team once comprised four teachers but under her leadership soon expanded to eight.  They are now able to offer A level English as well as media studies to senior students. The department has become a lot more active and students are encouraged to take part in wiring and poetry competitions, debating, the Lit Fest and events at Ductac and the Madinat.  Mina sees early language skills as a vital foundation that can be developed throughout the child’s schooling.

The school employs three teachers focusing on SEND who can support those with any special needs or problems.  A huge boost in the primary section has been to engage in the Film Fest from years 5 to 10 and students been commended for their work, in particular on their narrative strength.

We were next entertained by the delightful Preet and Lasath, head boy and girl in year 6. They conducted us on a full guided tour of the campus beginning in the reception to the student care area where a TV continually runs promoting school events and activities.  We learned that the children take part in a lot of inter-disciplinary lessons at primary level and are taught in groups averaging at 30 per class.

The corridors were painted a light bright yellow and green and the walls lined with some spectacular displays of children’s work.  Clearly a lot of time, thought and energy had gone into these presentations. Primary corridors were beautifully set out with wooden flooring, colourful tables and chairs and exciting decorative displays. Everything looked attractive and inviting.

We were shown the astroturf sports field, spacious indoor sports hall and two covered outdoor courts for sport and general play.  The UAE flag design had cleverly been used as the shading above.  A small swimming pool and a large well-maintained covered pool were additional bonuses to the sports department facilities.

A covered adventure playground with soft flooring was also being used by excited primary pupils on their break-time.  We spotted some colourful artwork on display boards where students had been studying architecture and portraiture.

There is a canteen available but most children prefer to bring their own snack to school.  We were pleased to be given the opportunity to speak to two parents from the school community.  Munizeh Khan has a child in year 4 and one in year 6 while Marina Grzella has a child in year 9 and another in year 12.

Both parents had heard about SPS through friends’ recommendations and had liked the school immediately when they visited, describing it as ‘a better environment’ than others they had seen.  They have been most impressed by their children’s love of the school and they have never had a day when their children didn’t want to go.  They are confident of the staff describing them as very good teachers throughout.

The parents realize that running the school requires a lot of effort and that sustaining a K12 school is a challenge.  Both agreed that the school offered good value for money, that their children were challenged and able to follow  the subjects that interest them most, be it sport, maths or other.

The level of homework required was considered to be ‘fair’ and of a good level.  Zaks is the school uniform provider and is thought to be of a good style and quality.  Both parents believed there was a lot of support for pupils with any learning problems as recently things had changed so much.

When asked whether education here was better than in their home country the response was better here.  Dropoff and pickup times can be rather challenging as it usually gets very busy but an RTA person is always present and two staff from the school are on duty.

There is a bus service available for the community which the parents seem happy with.  School trips are quite regular both locally and overseas.  Parents also appreciate the variety of ECAs on offer from ballet, karate, football, basketball and swimming. Some of these are paid for and some are free run by teaching staff.

An active parents association is run by a few individuals but more volunteer support would be appreciated.  The school use D6 communicator to keep in touch wit parents and the children run their own newsletter. Parernt’s evenings occur twice a year and the mother’s agreed that the appointments system was well run with adequate time to speak to staff.

Parents usually keep in touch with each other via WhatsApp. Both parents were satisfied with the food on offer from the canteen and said ‘no complaints’.. Asked overall to describe SPS to potential parents we received these phrases ‘kids are happy and have made good friends’, ‘the teachers make the school and they are much loved’.

It’s a very inclusive environment and nationalities mix so well, parents learn from each other.

The Sheffield Private School is a Best of school, a ranking determined by parent surveys on the site. It can be found in the following Best of rankings: