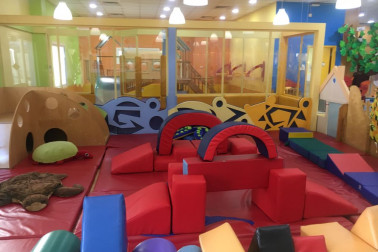 A small, well-established proudly comprehensive school in an excellent location, the English College is a gem.  An innovative approach to teaching mathematics has had phenomenal results and the approach is now being rolled out through other subject areas.  The school has an easy-going but professional atmosphere which is prized by parents, students and staff alike.

The English College was set up in 1992 and is an established and popular school situated on the Sheikh Zayed Road opposite the Oasis shopping mall.  It offers the English National Curriculum from years 7 to 13.

This year a company called LVC which is a UK based private school organization took responsibility for the school’s management.  The buildings are of 90s style, clean white two storey blocks. Some sandy outdoor parking is available but it’s limited but this is not a major problem as EC is a not a huge school.

The reception area welcomes you with a ‘Big Hello’ sign painted above the reception desk.  The light open space includes seating, plants and hoardes of trophies on cupboards and on shelves.

We began our visit by meeting Saiqa Liaqat, the head of secondary, Catherine Yates, the assistant headteacher and Tamsin Halis, the registrar.  The teachers spoke of their passion for education. The headteacher who is an IT specialist manages to teach two lessons a week to keep in touch with the students.

Saiqa described the atmosphere as having ‘a certain magic that touches you as you come in’.  The small size of the school – only 608 pupils – is seen as a huge advantage as they feel it enables strong, interpersonal relationships and makes it easy for everyone to get to know each other.  Catherine gave an example of a new y7 boy who was finding it really hard to settle in at EC. He appeared one morning with an excellent model he had created and was soon surrounded by pupils giving him praise and encouragement. This, she felt, captures the EC spirit of support, acceptance, warmth and builds confidence in the individual.

EC is, they said, firmly committed ‘to care’ and to remaining ‘a truly comprehensive’ school.  All children are accepted as long as they have adequate English and the school has space available.  There are 55 different nationalities represented and there is a short waiting list but there are some vacancies now.  Sibling discounts are not possible at this stage and there is no scholarship system on offer although the fees they consider to be very reasonably compared to similar schools in Dubai.

All the teaching staff are UK trained and have worked in the UK for a period of time. There has been a huge investment in staff INSET training recently. They claim that EC has a ‘modern approach to teaching’ and Catherine described the style as ‘maverick – a flexible fusion of traditional and modern’.

They have a house system which they feel works well, a prefect system and head boy/girl in leadership positions. It was felt that an important accomplishment of the school was to get children to succeed and never to allow anyone to fall through the cracks.

Another accomplishment is the development of BTEC which runs alongside the A level courses at sixth form level.  Courses such as applied science, IT, media studies and travel and tourism can be studied separately or along with A level courses.

The school’s biggest challenge they felt was the perception of EC in the community as they mentioned that it often gets overlooked.

There is building work to be done as little has changed in the 26 years it has been open.  The new board, however, has exciting plans and were described as being ‘genuinely interested in education’. There will be refurbishment of the science block, sixth form area and PE facilities. There is no DT department yet but this will hopefully be included as a separate subject a few years down the line.

We asked if the school had any area where they felt they were particularly successful.  On the pastoral side it is care and academically it is mathematics.  We met Fahd Kahloui who until a recent promotion within the school was head of the maths department.  There were huge changes introduced into the curriculum in 2014 and EC committed to a full-scale overhaul of how the subject had previously been taught.

A key factor in the striking success of the maths department has been the introduction of teaching by pace rather than by ability.  Children across all sets  cover exactly the same material  but at the pace appropriate for them individually.  The teaching team are extremely well-organised and work closely together sharing all information. There are fluent set movements and tests every half-term. Time is spent re-visiting problems many times for those that need and fast learners are stretched.  They have chosen to take three years from year 9 to cover the GCSE course work and the results are exceptional for a mixed ability school.  This summer 54% were awarded A* to A, 79% achieved A* to B and 97% A* to C.

We met the pupil leadership team next for a school tour and an informal chat about their experiences at EC. Luca Carstanjen is the head boy and Antonin Konig as deputy.  Ashton Smith is the head girl with Poppy Baker her deputy.  The school buildings are quite traditional inside with wide corridors and square classrooms. There is a smell of fresh paint and blue and red painted pillars line the walkways along with indoor vegetation. A large real grass play field is well used along with netball, basketball courts, a covered swimming pool, squash courts and a large multi-purpose sports hall.

We discussed what was special to them about EC. The small size and community feel were much appreciated. Luca felt he had grown and developed as a person and become more confident. Ashton described the atmosphere as being like a family and was grateful that he had learned that students should value things and use their opportunities wisely.

Highlights that captured the EC values were discussed next and the team felt they had so many memories they didn’t know where to begin.  Arts day was first brought up by Luca where the four school houses compete with individuals or groups dancing, singing or playing an instrument.  They described the atmosphere as being ‘incredibly supportive’ with any individual feeling they had the whole school behind them.

Ashton enthused about the ten day Tanzania trip where the group travelling gave hard labour for a charity, helping build foundations for a block in a local school. They helped construct desks, plant trees along with collecting and donating milk formula, clothes, nappies and textbooks.

The Duke of Edinbury scheme is another popular element of the school. A large group take part in the bronze level, silver level students travelled to Borneo and gold to Vietnam and Cambodia.  A yearly social event takes place when the new year 7 arrive and a sleepover takes place in the school with children in sleeping bags lined up along the corridors.

It is run by the sixth form with staff support and includes barbeque, talent show and a movie.  The students claimed that this was a significant bonding event as they described how well and how quickly the years 7 and 13 got to know each other.

At the end of our visit we managed to stop a few parents at pick up time. They were generally happy with the school which they had chosen primarily through friends recommendation.  The small size was again claimed as a bonus particularly when children had the major move from primary to secondary. The location was also seen as a positive aspect.

One Indian dad and South African mum we spoke to thought education was better here than in their home country but a Canadian mum thought the opposite.  Parents were quite happy with ECAs available and appreciated the friendliness of the staff and sense of community. It was seen as sad that there was not more focus on music as there is no choir and only a small orchestra.

The uniform is white shirt/blouse with grey trousers and skirt and is supplied by Magrudys.

The English College Dubai is a Best of school, a ranking determined by parent surveys on the site. It can be found in the following Best of rankings: