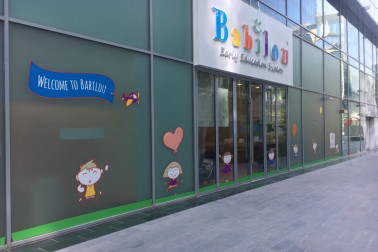 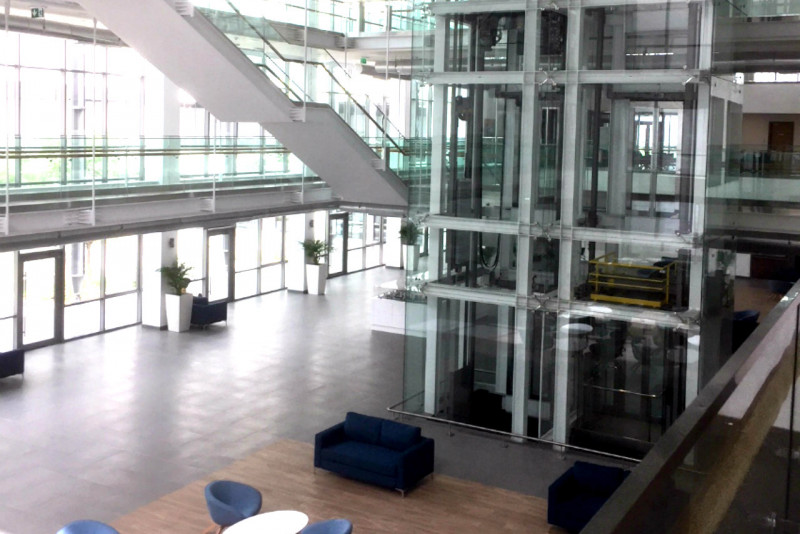 The new Dubai branch of NLCS opened its doors in September 2017 with 241 students from pre-KG to Grade 10. Situated in Mohammed bin Rashid Al Maktoum City on the Sobha/Hartland development, it is not far off the Al Khail and Ras Al Khor roads.

Currently, the approach to the school is yet to be tarmacked and is via a round about route across a fast developing construction area. Directly behind the back wall, a significant housing development is under construction, with the school's very large playing fields separating it from the housing. The surrounding walls and railings of the school have been landscaped, so will soon be tree-lined, very green and provide privacy.

The NLCS buildings are really impressive, state-of-the art and comprise white blocks, mainly formed from windows, to allow plenty of daylight inside. The front façade has large brown walls with the school’s name embossed in blue along with the NLCS sail-ship logo.

We were greeted by security at the barrier and then able to drive in and park in a covered parking bay. A circular revolving door takes you into the smart, stylish reception area where we were at once welcomed by the reception staff. The personnel were polite, friendly and well-prepared.

Are you a parent, teacher or student at North London Collegiate School Dubai?
Take a survey arrow_forward

Natalie King, the Head’s PA soon collected us and took us through the enormous ground floor area and upstairs to wait for our appointment with the Principal. Mr Daniel Lewis spoke enthusiastically about the NLCS brand and discussed his personal involvement in setting up the successful Jeju branch of the school in South Korea, now in their seventh year.

He told us that since opening the Dubai school in September, the number of students has now risen to 310 and he believes by September 2018 there will be between 650 and 700 pupils at the school. To date class sizes are 20 max in early years to year 2, years 3 to 8 have 24 per class, year 9 up 18 per class and the plan is to have no more than 16 per class at sixth form level.

We wanted to know a little bit more about this ambitious, confident and dedicated school leader. Daniel described how as a young man he ‘didn’t like the idea of making other people money’. Instead he spoke of ‘wanting to work in a field that creates some type of social good’.  We asked him ‘what gets him out of bed everyday?’ and he replied ‘this type of education transforms kids…there are no limits for kids or labels’.  He described the NLCS educational journey as ‘positive and aspirational with floors not ceilings’.

Daniel entered the profession as an English teacher before he focused more on drama. He has spent 15 years with the NLCS group and as the Principal in Dubai manages to teach public speaking to all the students in his school. He is extremely proud of every department and programme at this time. The arts are integrated within the curriculum and there are lots of ECA opportunities. As a school they have a clear anti-bullying policy and Daniel believes innovation is constantly happening throughout the school. Here the approach to homework is ‘an important cornerstone to complement the fast-paced lessons’.

When asked what makes the school uniquely different he said ‘the really inspiring teachers who have subject passion. The kids just light up. I cherish seeing the change in a child who discovers such a passion. We get such positive feedback from parents, many of whom get involved as volunteers’.

As far as the current makeup of pupils is concerned UK passport holders are the largest group with the remainder being ‘pretty mixed globally’. A few have come from NLCS in London  and some from the South Korean Jeju school. To date there are no UAE nationals enrolled.

Daniel spoke of how he came to Dubai to set up NLCS with ‘a really positive and ambitious attitude’. When we discussed the difference between NLCS and other UK school brands which have moved overseas he said that ‘our establishments are high performing schools’. Wanting to know a key phrase he would use to describe NLCS Dubai he said: ‘a school that is unique in bringing a quality that mirrors the top schools in the UK. We’re an IB school, but with a very strong English backbone’.

Within the curriculum, Daniel feels that all subjects are equally important and that the staff want all children to do well. He believes NLCS have the best school theatre in Dubai. He spoke of feeling ‘the NLCS DNA in the school’. Teaching staff will be able to move within the NLCS Group. There are regular pupil exchanges and debate between schools over the internet. We inquired what he believed were his school’s biggest challenges and he said ‘teacher retention and the turnover of pupils’. Daniel believes that staff retention will be stable due to good salary and accommodation and regular INSET training.

We asked Daniel about his expectation of IB results in NLCS Dubai in the future. In London the school has an astounding IB average score of 42.4 and in Jeju the average score is 38. Daniel believes that here in Dubai he will be expecting between 38, 39, 40 aiming for the 42.4 score London has set. He is extremely confident that NLCS can surpass the highest average in Dubai to date of about 36. As Daniel put it: ‘competition is competition’.

Prior to our tour of the school, we met with a group of parents whose children were in various grades within the school.  Almost all had moved their children from other well-known schools in Dubai - in part for the IB curriculum, but mainly for the experience and teaching that they felt their children would receive at NLCS.  None have been disappointed so far and were extremely complementary about the teaching staff and the progress that they children have made since joining NLCS (having been at the school for just two terms).  We were repeatedly informed that they were now "different children" who love coming to school and have developed both as individuals, in terms of character and academically in this short space of time.

Our school tour was initially conducted by Salayla from Year 7 and Rayan from Year 9, and then later by Natalie King, the Head’s PA. Both students had joined the school at its opening, Salayla direct from a school in London and Rayan from another school in Dubai.  Both spoke about how much they enjoyed NLCS, how impressed they were by the staff and the support that is provided, and how they appreciated the opportunities to take responsibility at school.

Our tour started in the huge main atrium of four floors which is very much open plan with light wooden floors, ample sunlight and a contrast of clean white and silver. Everything is very visible, and open plan AC ducting is on view. The overall impression is modern, stylish and industrial.

There is an open stairway and lifts to service the flow of personnel and on the ground floor a café with comfy seating. The impressive auditorium/theatre is state of the art with a wonderful stage and ample seating. We were shown several outdoor play areas with a huge variety of climbing frames, slides and play houses. Corridors around the school are wide with the same light wooden flooring and colourful strong looking lockers. We saw two beautifully equipped science labs and two libraries which were very well stocked. The indoor sports hall is well fitted out and was being used by an energetic group playing basketball.

We were invited to enter one classroom where a maths lesson was in progress. Children were sitting in groups of four working together discussing problems set, while the teacher moved from group to group with ease and confidence. The relationships looked professional, friendly and the atmosphere was lively.

Our visit to the KG section of the school started on the Ground floor where the youngest children are based in a quieter section of the school.  Four pre-KG (FS1) classes are based here, in large, open, spacious classrooms with shared toilet facilities between each pair.  Children are confident and polite and clearly interested in their tasks.  The KG section offers the PYP curriculum under-pinned by the UK EYFS trained teachers, mixing the best of both through an enquiry-based programme which focuses on the core development areas of young children.

There is a large quadrangle with a wide range of play and climbing equipment which is shared by pre-KG and KG1 children.  There is a maximum of 20 children per class, with a teacher, a teacher's assistant and an additional support staff member shared between two classes.  All teachers are Early Years degree-qualified ensuring the highest standards, quality and experience, which the NLCS team sees as its USP in this important area of the school.

There are currently 3 KG1 classes, but this will extend to 4 in September 2019.  Again there are a maximum of 20 children.  In addition to the focus on independent learning and questioning, staff also ensure that confidence building is a key part of their goal for their young students.  In addition to the classroom programme which is designed to support creative, literacy and numeracy skills, children also participate in Arabic and PE once per week (with a double-swimming lesson is addition), as well as Library, Music, and ICT.  There is no doubt that the KG section is one where children clearly are very content and happy.

As we left the school after our tour, we could see groups of students of all ages out on the playing fields taking part in a wide range of sports activities.  Students did not seem in any hurry to get home.

There is not an open acceptance policy as an entrance exam pass is required. At secondary level there are several scholarships available.

North London Collegiate School Dubai is a Best of school, a ranking determined by parent surveys on the site. It can be found in the following Best of rankings: