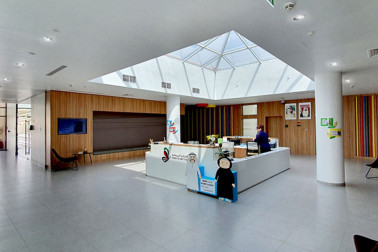 GEMS FirstPoint School is located on a large site close to the Villa project between the Al Ain , New Emirates Road and Sheikh Mohammed bin Zayed Road, serving the newer communities in this area.

Considering its apparent distance from the traditional areas of Dubai, it may come as something of a surprise that it is surrounded by several other schools in the same Dubai Silicon Oasis, Nad Al Sheba communities such as Repton, GEMS Wellington Academy – Silicon Oasis, Kings Nad Al Sheba, Dubai English Speaking College and Dubai Modern Academy. In reality, this area is not more than a 30 minute drive from the traditional areas of Jumeirah and Umm Suqeim and an easy reach from the various communities located along Sheikh Mohammed bin Zayed Road from Jumeirah Golf Estates in the south, to Mirdif in the north.

Are you a parent, teacher or student at GEMS FirstPoint School?
Take a survey arrow_forward

The proximity of a large number of other, mostly British curriculum, schools had accounted for the fact that the huge structure had been amongst the smallest GEMS schools in terms of student numbers on opening with 340 students last year. That has since changed quite dramatically. The school is now home to 840 pupils. This is a very sharp increase in one year, but in line with forecasts and plans - the school had told us that this would be the student population size for 2015/16.

There are currently 100 members of staff.

The grand first impression of the school from a distance is rather let down by the requirement to park on the sand outside the school perimeter, and the less than welcoming approach of the Security man at the gate. Although there is clearly visitor parking inside the school gates (and it is located away from the teaching areas), it is not open to visitors – not an issue in November when our visit took place, but definitely not much fun in the warmer months.

Once you reach the main entrance to the school and enter the Reception, you are greeted by a friendly receptionist in a light and airy environment which has a square, somewhat industrial feel. Children’s artwork is on display and there is a small cafeteria section overlooking the rear of the school. The building is L shaped currently with the Primary School on one side and the Secondary on the other.

A new building to the right of the current structure is almost complete and houses all the sports facilities, including a large six court indoor Sports Hall, a 500 seat Auditorium with Music and Practice Rooms and an Apple Mac room, Performing Arts rooms and 25m and learner Swimming pools. The building will have been completed by now.

There is also space at the back of the current buildings for another block which would eventually form a separate Sixth Form building. The existing buildings have a capacity of just over a 1,000 students; expansion would allow for this number to double – the school was originally planned for 4,000 students.

The previous Parent Relations Executive –Joanne – is also a parent with a daughter at the school. She explained to WSA that the school's students are currently in classes from FS1 to year 8 (now up to Year 9). As is usually the case, the younger students make up a significant proportion of the total. The current PRE is Marian.

The Foundation Stage classrooms are located on the ground floor of the first teaching block and all open out onto an outside terrace area. These terraces overlook the very large astroturf pitch and a shaded multi-sports area.

As is usual with newer GEMS schools, classrooms are light and open and well equipped. In addition to the outdoor space, there is also an indoor area which is used for Soft play, Music and Movement classes and also as a meeting area and central drop off point for parents. To the rear of the section is a large fenced outdoor play space with soft flooring and large play equipment including climbing frames and slides.

This area is shaded and clearly much enjoyed by the children. There will be 6 classes each of FS1 and FS2 and classrooms are organised around a free flow arrangement with tables of 4-5 children, each table being focussed on different core tasks led by the teacher, including Maths and Literacy elements. Each pair of classrooms has shared toilet facilities, so children do not have to leave the classroom. Currently, music is taught within the FS section but this will move to the new Sports and Performing Arts Centre when it opens in January. In addition, FS children also learn Spanish and French informally (it is timetabled but is part of the overall classroom activity) and Arabic and Islamic Studies are provided for Muslim students from FS1.

Year 1 to Year 5 are housed on the second floor of the building with 2 classes per year group currently from Year 1 to 3 and 1 year 4 class. Additional year 2 and 3 classes will open in January 2015. This part of the building houses 2 ICT suites and children are also provided with I-pads and laptops for technology-enabled teaching. The Primary Library is light, bright and colourful with stools and bean bags to make it a welcoming space where children can also do homework after school. There is also a separate canteen for Primary students serving hot and cold meals.

The Secondary section of GEMs FirstPoint, located on the opposite side of the central Reception area houses additional classrooms for year 6 upwards, together with a range of Science and Technology Laboratories, an enormous Secondary Library which opens in January 2015 and Secondary canteen. Unusually for schools in the UAE, FirstPoint also has a very large Design and Textiles Room and a Food Technology Lab which includes ten cookers, fridges and all the usual kitchen facilities. All students from Year 1 will have the opportunity to use sewing machines and to prepare food.

One of the major features of the school is its Enterprise culture and the Technology rooms play a major part in this, allowing students to establish their own “companies”, produce their own “goods” and market and sell these to fellow students, teachers and parents whilst raising funds for Charity and other purposes. Healthy competition is created through House competitions related to the success of the initiatives. The intention is that during the next school year, the participants in these Enterprise Days will sell their products to local companies and exchange experiences with them as part of the learning process.

Again, as with most UK curriculum schools in Dubai, the majority of the teaching staff are from the UK with one American and one Canadian staff member each and Jordanian teaching staff for Arabic and Islamic Studies. There is some provision for English Additional Language support within the classroom environment and Learning Support staff working with a limited number of students requiring additional support, but this area will be expanded with the set up of its Achievement Centre which will have a specialised SEN Coordinator from January. Teaching staff provide After School Activities for one hour per child per week. From January, a specialist external provider will add to the range of activities on a paid basis.

We are told that the Principal fosters an Open Door policy and that the School’s aim is to be a Community School with a strong focus on building ties with families living in the immediate area. This is already happening to some extent with parents being able to use the school’s sports and recreational facilities twice weekly at present and this will be extended once the new Sports block is open. There is also a strong sense of identity within the school with all children wearing the school uniform, which includes back packs that can be seen in lockers around the school.

GEMS FirstPoint, in common with many other newer GEMS schools, shows all the signs of industry and organisation with cheerful students and enthusiastic staff. At the moment, the sheer size of the school versus the number of students makes it seem a little sterile, although every effort has been made to create a more vibrant impression in the Primary part of the school where there are larger student numbers. For the time being, those students at the school have access to very good facilities that are certainly not overcrowded. Particularly from year 1 upwards, low student to staff numbers that can only benefit them.

GEMS FirstPoint School is a Best of school, a ranking determined by parent surveys on the site. It can be found in the following Best of rankings: