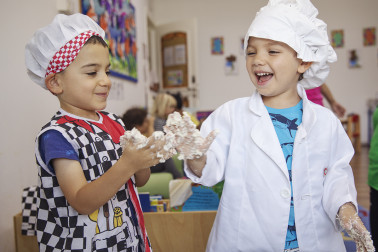 Situated in Al Barsha South, on what is often described as “school street”, Brighton College Dubai is a short drive from residential communities such as Dubai Hills, JVC and the Springs. Now in its fourth year of operations, this premium school has steadily grown in student numbers with a very appreciative community of families. We were eager to visit the school to find out more.

Are you a parent, teacher or student at Brighton College Dubai?
Take a survey arrow_forward

We were welcomed into Mr Crane's office, a place he said he aims to spend little time in, preferring to be physically present and active in school goings-on. Mr Crane shared a little about his professional background with us, prior to his time in the Brighton College schools. Starting out his career as a P.E. teacher, Mr Crane has also taught science, before moving into leadership in a UK independent school.

Still a keen sportsman at heart, Mr Crane described himself as having a “competitive nature”, which we would not have guessed of this very warm and calm natured Head Master. A family man also, he cheerfully shared that he and his wife had very recently had a baby, while in the week of her delivery, he had led the school through its KHDA inspection (an intense period for most schools, taking place over multiple days). Despite all of this, Mr Crane gave the impression of always being fully present, listening and connecting with those he interacts with, and very much on-the-ball too.

We asked Mr Crane what he feels are the stand-out elements of Brighton College Dubai. Without hesitation, Mr Crane told us of the school’s “excellent” teachers, (a view that was later very much shared with our parent panel), the individual attention provided to each child and family, and the feeling of community and connectedness that has been established at the school. Speaking on community, Mr Crane told us:

“Our parents are incredibly loyal, and we’ve been able to establish real partnerships with them. This has made a huge difference to the school.”

We also met with the school’s Senior Leadership Team and found their message, focuses and ambitions for the years ahead to be very much aligned with those of Mr Crane. Head of Prep School, Sarah Brannon, a founding member of the school’s leadership team, explained that the school is entering into a new phase in its journey:

“We are no longer a new school, we’ve done that chapter, and this next chapter of being a a young school is very exciting. As we evolve and develop, there’s a lot to consider, ensuring that we continue to be dynamic and ambitious about what we provide for our pupils to be truly successful.”

Mrs Sevjan explained that Brighton College’s house system allows for the feeling of a ‘school within a school’, allowing for each pupil to receive the individual and personalized attention they need, from academic guidance to emotional wellbeing, under the supervision of a House Master or House Mistress. Each house has its own common room for pupils to mix between age groups, in order to build a sense of community. The school also holds house competitions and activities to further support this.

Our reviewer was interested to see the school’s Early Years department using the Curiosity Approach (utilising open ended resources and natural environments to inspire curiosity, imagination and problem solving) in addition to the UK’s EYFS framework. Classrooms were spacious and beautifully curated.

The school’s library, while aesthetically modest, was a hub of reading for enjoyment; our reviewer took pleasure in observing a class of young children excitedly flowing in towards the many picture books, while another group returned to their classroom joyfully clutching on to their individual borrowed books of choice. The school’s librarian, Mrs Madhulika Badhe, described her role with infectious passion, declaring her love for the written word, in all its forms.

Our student panel, of mixed nationalities and age groups, spoke openly and confidently about their experiences at the school. We were impressed by the openness with which they expressed themselves, which we felt was suggestive of a school culture that values and respects student voices.

Our student panel agreed that they felt they were known and understood by their teachers and key staff members and that their individual needs and interests were taken into consideration at the school. They spoke very positively about their teachers, with the school’s P.E. department inspiring notable enthusiasm.

When asked about their experiences of bullying, our student panel unanimously agreed that the school’s zero tolerance approach to bullying works and that they felt safe and respected while at school. Expectations on pupil behaviour are clear, they told us, and mutual support and kindness are a key aspect of the culture of the school.

Our student panel’s only criticism of the school was its relatively modest sports facilities and somewhat limited A Level course options, due to the current modest number of students. We do feel it is appropriate to provide context here, that the pupils voicing this view had previously attended more established Dubai schools with uncommonly vast campuses; Brighton College Dubai could certainly not be considered lacking in either of these areas when comparing to competitors more broadly. When asked how Brighton College Dubai faired by comparison in terms of the full school experience, these pupils confirmed without hesitation that they are much happier currently than they had previously been elsewhere.

Our parent panel were overwhelmingly positive about the school, praising the feeling of community, the high standard of teaching and the motivation the school provides to their children. There was very warm praise given about the school’s leadership, giving us a sense that the senior leadership team, and Mr Crane in particular, really invest time in building relationships with each family. Each one of the parents on our panel spoke of how happy and engaged in learning their children are and cited this as a clear sign that they had made the right choice when sending their children to Brighton College Dubai. Our reviewer noted that such positive praise and warmth from parents about a school is unusual and was very much convinced of their sincerity.

We visited Brighton College Dubai nearing the end of its fourth-year operating; it is certainly no longer a “new school” and yet appears to have retained the warmth, energy and personal touches of a school in its early days, coupled with the expertise and confidence of a more mature school. Having only been open for a year and a half when the pandemic struck, Brighton College appears to have come through this challenging period with strength and a huge amount of love and loyalty from its founding families; our reviewer was quite moved by the appreciation for the school shared by parents and pupils. Very much in line with its Brighton College branding, this appears to be a school that really delivers in terms of pupil happiness as well as academic engagement and achievement.

Brighton College Dubai is a Best of school, a ranking determined by parent surveys on the site. It can be found in the following Best of rankings: