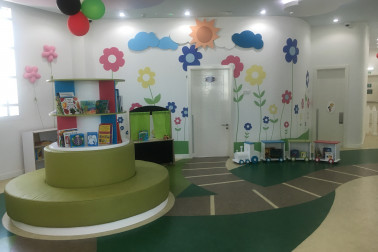 We were delighted to visit Brighton College Abu Dhabi, now that Covid-19 restrictions are becoming light enough for an almost back-to-normal school experience to be possible.

Brighton College Abu Dhabi opened back in 2011 and was the first of the Brighton College ‘brand’ schools to be established in the UAE, the success of which then led to the opening of a second school in Al Ain in 2014 and in Dubai in 2018. Brighton College Abu Dhabi has established a strong reputation for academic achievement, has an award-winning performing arts department as well as a record of sporting achievement. However, the school’s leadership have a broader vision, with community and social conscience the heart of their efforts.

Brighton College Abu Dhabi is situated by the Bloom Gardens residential development, close to Khalifa Park. Its quiet location and impressive entrance create a first impression of confidence and composure (although the limited parking space available to the front of the school likely creates a different feeling at busy pick up and drop off times). We were greeted by a security guard at the gate, who guided us in following current Covid-19 protocols, ensuring all requirements were met.

The school’s leadership underwent major changes at the beginning of this academic year, with the departure of Mr Simon Corns, who had held the position of Head Master for five years. Mrs Helen Wilkinson took the reins as Head Mistress in September 2021 and at the same time, Dr Jennifer Walters joined as Head of Senior School.

While meeting Mrs Wilkinson and Dr Walters, we noted that these two school leaders provide a warmth that this highly academic school perhaps needs. They spoke with particular passion about the pupils as individuals and the school’s community.

Dr Walters shared with us what she believes to be a unique aspect of Brighton College Abu Dhabi:

“There is a palpable love of learning here. Our pupils are incredibly dedicated, they really and truly do take responsibility for their work to a level that I really hadn’t previously seen elsewhere. There is an incredible sense of purpose and motivation here.”

“Our aims at Brighton College are not only about academics though; we focus on developing a social conscience. It may sound cliché, but we want our pupils to make the world a better place than they found it. Whether that's through their academic success, or giving joy through playing a musical instrument, it's part of a collective desire to just lift one another.”

Mrs Wilkinson explained that one of her priorities, as Covid-19 restrictions are lifted, is to work towards re-building the school’s feeling of community:

“We’re planning to do more events, to provide more opportunities for pupils to compete, to get out and make a difference outside of the school walls, spend more time with one another and really bind the community together. We are keen to get parents back on site, and to enjoy having them physically involved as part of our community.”

Are you a parent, teacher or student at Brighton College Abu Dhabi?
Take a survey arrow_forward

We met with Head of Preparatory School, Mr Daniel Cummings, who also joined the school at the beginning of the 2021-22 academic year. Mr Cummings spoke assertively and positively about setting high expectations for pupils. When asked whether there is a culture of academic competitiveness in the school, Mr Cummings noted that there is friendly competitiveness, but that mutual support between pupils is much more at the heart of the school. We later found this sentiment was echoed in shared student experiences.

Our tour of the Prep and Senior schools was conducted by pupils, rather than staff, a decision that is very much in keeping with the culture of enabling student leadership described by the school’s leadership team. Our reviewers were impressed by the confidence and aptitude of the selected pupils in providing us with information and guidance.

Facilities at the school are, in the most part, excellent and well maintained. Sports facilities are particularly impressive, including a large, shaded swimming pool, a full-size Astro pitch and multiple spacious indoor facilities. Sports are clearly a significant part of school life, and the school takes pride in its teams sporting achievements, competing with other Abu Dhabi school teams. Another stand out area, facility-wise, is the performing arts. While still under the final phase of renovations, we were able to have a sneak-peak at the school’s impressive new theatre, which our student guides were clearly excited about using.

Our Year 12 student guides shared their experiences of sixth form life as they showed us around. What they described was a school culture of expecting excellence from themselves, where self-motivation and determination to achieve is the norm. They proudly showed us a fitness suite and independent study and social spaces that can be utilised by Sixth Formers, all of which had a very university-like feel. Indeed, the pupils themselves displayed a presence and confidence in their communication that felt akin to university pupils rather than Sixth Formers.

The school’s Pre-Prep section (FS1 – Y2), which currently has around 600 children attending, feels like a school within a school. Its separate entrance and enclosed outdoor play spaces are well suited to this age group. It contains two large outdoor play spaces, a library and six classrooms for each of the four Pre-prep year groups (additional classrooms newly added). Our reviewers noted that some classrooms were a little sparse and the section had an appearance of uniformity that may not appeal for this age group; we had expected to be more inspired by these learning environments, given the high quality of the school in general.

Our panel of six pupils ranged from Year 6 to Year 12. Our reviewer was once again impressed by the confidence and eloquence of the young people we met. The opinions of the group were offered enthusiastically and were eclectic (a good sign, in our view, suggesting that individual expression is nurtured and welcomed in the school). The positives of the school, according to the student panel, include the quality of teaching and an excellent range of extra-curricular activities on offer (with some particularly interesting options such as a bioethics club). Our panel unanimously praised the school’s performing arts programmes and expressed considerable enthusiasm about an upcoming production.

Fun competitions between the school’s houses were also discussed. A recent video competition, which encouraged pupils to showcase their performance skills, has created particular excitement. Another house competition under way at the time of our visit included a vote on which member of staff would be pushed into the school’s swimming pool (we noted Head of Prep, Mr Cummings was in the running). It was apparent that there have been considerable efforts to ensure the feeling of community within the school has been sustained, and that fun is purposefully part of school life. This had been greatly appreciated by these pupils.

The pupils were positive about the academic expectations in the school and expressed pride in their achievements. They reported feeling supported by their teachers and likewise by other pupils, describing the school culture as being “competitive in a friendly way, but everyone helps each other too”. Our reviewer noted that several of the pupils were unclear on who they could talk to if ever they were struggling or feeling low, but all felt they had positive relationships with their teachers.

When asked if they felt their school experience could be improved in any way, pupils expressed a frustration that they did not feel adequately supported in “catching up” if ever they are absent from classes, and that they do feel some anxiety about “falling behind” at times.

Our panel of parents had children spanning from FS2 to Year 13 in the school. They unanimously agreed that pupils are engaged academically and were happy with the support and progression that they have seen. They felt that, in general, teachers make considerable efforts to tailor learning to each child’s individual needs:

“My daughter really breezed through years 1-4 but now in Year 5, she's having to knuckle down. I've noticed that they're really starting to tailor to her learning style and her needs without us even asking for it. The teacher will just tell us they’ve tried a different approach with her, to get in her into the right mindset, and it’s fantastic to hear that.”

Parents who had been a part of the school for a longer period noted that they had experienced ups and downs, that some teachers had been stronger than others, but that in general their children were engaged, learning and happy to go to school.

Our panel were eager to have the opportunity to get to know the school’s new leadership team better but were pragmatic in understanding the challenges of parents not yet being permitted to enter the school building due to Covid-19 regulations. They were appreciative of the communication of Head Mistress, Mrs Wilkinson, who has sent out newsletters in video format to have her presence felt and allow parents to get to know her.

It is clear that Brighton College Abu Dhabi is an outstanding school in many respects; the greatest testament to that fact is its confident, ambitious and self-motivated pupils. The school’s experienced and confident leadership team, while largely new to the school, has  only strengthened a culture that empowers and enables its pupils. This fact was was echoed around the school, from pupils, parents, and staff alike. Only perhaps in Pre-Pep would we have liked to see a more enabling and inspiring early years environment.

At the other end of the school, BCAD's Sixth Form offering will not be for every student - it does not invest in significant vocational pathways to make it truly inclusive. But for the more traditionally academically inclined, there should be no doubt: This is a school that is delivering a highly motivating, and highly stimulating, education and environment.

Brighton College Abu Dhabi is a Best of school, a ranking determined by parent surveys on the site. It can be found in the following Best of rankings: