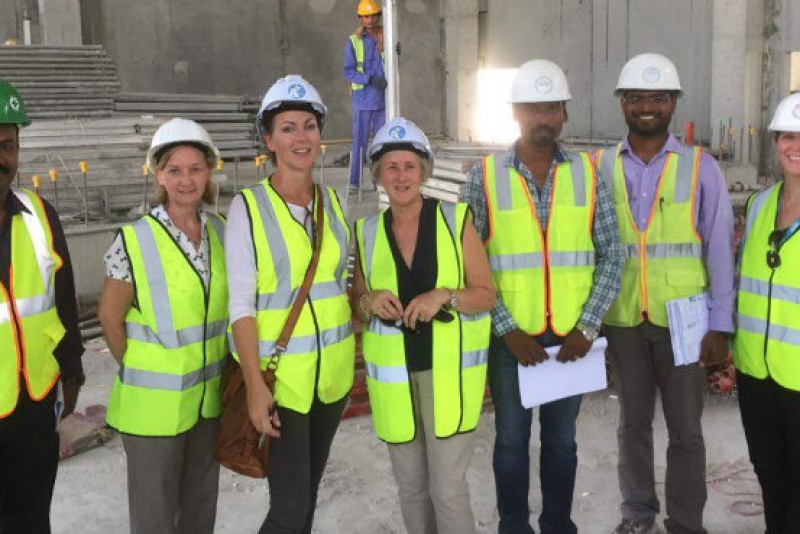 Of the six new UK and US curriculum schools set to open this summer, GEMS Founders is the only school placed boldly in the mid-market fee bracket.

With fees between AED 22,000 and AED 29,000 for FS1 to Year 8, it would appear the ‘fee-wow-factor’ alone, in today’s price sensitive market, has Dubai’s parents literally falling over themselves to secure a place.

With only a few open days to promote the school, the admission numbers seem to have taken everyone by surprise, (we suspect even GEMS themselves!)

While no one at GEMS wants to give too much away, we get the impression that come August, Founders will be making a sizable dent in primary attendance across a surprisingly large cross-section of Dubai’s schools.

And, it’s not just Dubai, “we’ve had requests for buses from Sharjah too,” says Foley.

WhichSchoolAdvisor.com has heard via rumours, (none of which were particularly denied by Founders management during our visit), that the school already has an inordinate number of students signed-up, and the rate shows little sign of relenting.

As with all new schools, admissions at Fouders are ‘bottom-heavy’ meaning the lower years have the highest numbers. The current figures at stand at an impressive 12 to 14 forms across the Foundation years, falling to 2 forms for Years 7 and 8, however, these are by no means final figures and may well still grow between now and August.

But what will Founders offer students? How will it operate on reduced fees? And, will it 'feel' cut-price, especially for those arriving from premium schools?

Firstly, it should be remembered that Founders isn’t a new concept for GEMS. The school is based on the already successful GEMS Winchester model, a UK curriculum School in Jebel Ali. Rated Very Good by the KHDA, Winchester is, (excluding the Indian schools) significantly cheaper (AED 12,996 to AED 28,992) than the other nine other schools in this category.

Middle and upper management at Founders has been sourced from existing GEMS staff, many of which already have experience in the group’s mid-range schools.

To WhichSchoolAdvisor.com, all that really appears missing is a swimming pool.  School operations manager, Hannah Davies says, “pools cost a lot; it’s the maintenance, the upkeep, the lifeguards etc.”

So it would seem that for parents who can look past the loss of a weekly shared swim lesson, Founders offers an inordinate amount of school for their money.

Our tour of the school building turns up no evidence of cost-cutting either. Classrooms are averaged size, (these will accommodate up to 25 students in Foundation and 30 in Years 1 and above), each have large double exterior windows and an interactive white-board.

At 17,000 square metres of built up area, over its ground plus three floor design, the square metre per person works out at a respectable 6.5 metres.

The 30,000 plot size is also on a par with the rest of the new schools opening this year, so apart from the pool, where is the evidence of cost reduction at Founders?

Another well known UAE school group has maintained for some time that 70 percent of their income goes straight out- in teacher salaries. And, while we could debate this figure endlessly, the fact remains that salaries are a significant expenditure in any school.

To reduce salaries, Founders has again, employed the Winchester model. The school will have a significant percentage of newly qualified teachers to reduce costs. These will be sourced globally rather than exclusively in the UK, as most premium UAE British schools prefer.

Founders sits on a shared plot together with the two new GEMS National schools. To avoid the obvious potential traffic congestion, the schools will stagger their start times, plus Founders plans to route parents to the front of the building and buses to the rear.

The location in Al Barsha near GEMS World Academy also allows for the students to potentially use the premier facilities at this school too, however, it’s unclear right now if amenities will be shared with the national schools next door.

With the run-away success of admissions at Founders comes the inevitable question, ‘at what 'fee-point' does a new school stop being a concern for parents and instead become a really rather attractive proposition?’

At WhichSchoolAdvisor.com we’ve been answering a slew of parent concerns recently about new schools. Most centre on the credibility given the absence of KHDA reports and parental feedback, but there’s also the worry of an entirely new team, the ethos and more.

Yet the success of Founders indicates that with the right fees, management and brand backing, parental concerns simply melt away.