The WhichSchoolAdvisor.com team are lucky enough to spend our days in and out of fantastic schools. We often say that the most important stakeholders we meet are the students… but what is life really like for students in UAE schools? For this brand new feature we visit students across Dubai to find out…
WSA Pupil Profile: Year 12, IB and A Level
By Jenny Mollon 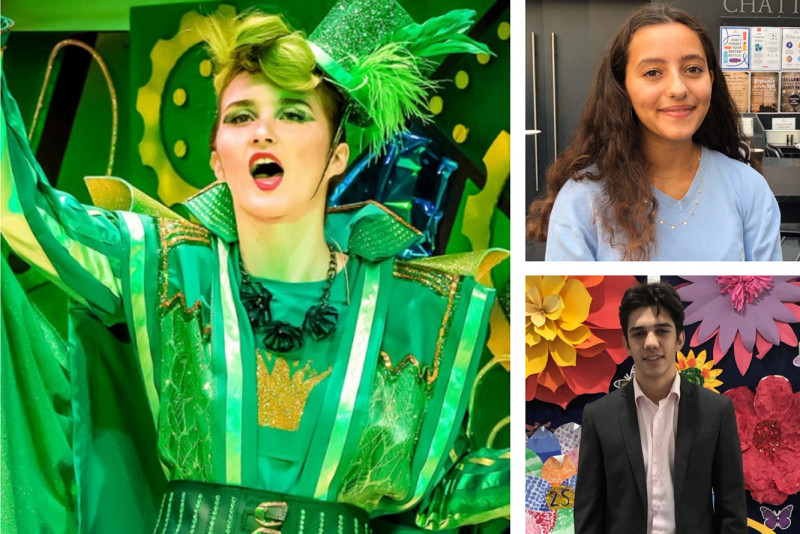 In this series we talk to students from three well known Dubai schools (Nord Anglia Dubai, the three Dubai British schools (DBS, DBF and DBSJP) and Kent College Dubai) at key stages in their school lives…the beginning, the middle and (very nearly) the end!

After releasing our profile of the Foundation Stage and Middle Years students over the past two weeks, we are proud to introduce you to our three Year 12 students, Carina of Nord Anglia School Dubai, Emir of Dubai British School and Chelsey of Kent College Dubai. We will be following our Year 12 students throughout their first year in Sixth Form, the final phase of their school career, so look out for lots of pictures of their adventures on the @whichschooladvisor Instagram page and further updates here in Terms 2 and 3!

Carina, how long have you been a student at NASD?

I joined NASD in Year 10. Before that, I was a boarding school student at Wellington College in the UK. My parents moved to Dubai for my Dad’s job, and eventually I followed them. It’s so much better for us all to be together.

Well, it was stressful at times! I think for a lot of us it was the first time we realised how hard we needed to work. I was relieved when it was over, but in the end I was very happy with my exam results. What I have realised that was very helpful about Year 11 is that we built up a really good work ethic for years 12 and 13. In Year 12, everything steps up a gear again! It’s nothing compared to the GCSE exam schedule, but the work is a lot more than we would have last year. GCSE’s compared to IB DP…well, it is a big jump but then again it’s so exciting. There are a lot of positive aspects to working hard! In Nord Anglia, you are trusted to be a lot more independent and that is something I value I lot. I’m enjoying the independence.

How do you balance all this hard work with a teenage social life?

Well, that’s it, we have to find a balance. Last year, I had a lot of friends in other schools who weren’t doing GCSEs so I was the one who had to say no to doing things a lot of the time. I didn’t have much time to go out, but I was willing to make that sacrifice! In Year 12, it’s a bit more relaxed because you don’t have exams at the end of the year. We still have to work a lot but there’s not that pressure as such … that said I know I can’t slack off this year as I’ll find it so much harder next year!

What are your goals for life after NASD?

My goals is university in the UK, in London or maybe Canada. I want to study International Relations or Law. This school has definitely helped me to have high aspirations!

Emir, we understand you achieved fantastic GCSE results. Congratulations! Tell us about your choices for Sixth Form…?

For a time I considered boarding schools in the UK as a next step…but DBS offered me a full scholarship for Sixth Form and it made me think “this school really values me”, that was really important. It’s definitely been the right decision for me to stay. I’m now studying Physics, Economics, Mathematics and Chemistry at A' Level.

Life at as DBS student really isn’t all that complicated, you come to school and you’ve got such a simple reason to be here, to study and to do well. That said, I don’t think this school places as much emphasis on the final exams as others do, it’s all about enjoying the experience, enjoying the learning. Very rarely do we discuss exams and that is great in term of managing the pressure.

Working out what I want to do next is still the biggest hurdle for me. What helps is that at DBS there is a huge emphasis on university preparation, much more than I expected. We have a Careers Adviser who constantly bombards us (and I mean that in a good way!) with great information about careers and university choices. I think the thing with A Level’s vs the IB Diploma is that A Levels force you to specialise, and for me that is definitely not a bad thing. If anything, it has helped me streamline my ideas.

What is your social life like as a busy DBS student?

Well, Year 11 was definitely busy! As a British school, DBS puts a lot of emphasis on your GCSEs and we all worked really hard.

What I like about DBS is that they offer us a myriad of opportunities to enhance our profiles for university applications. For example, I’ve just been appointed Student Ambassador for the British Council. I will be the link between the student body of DBS and the British Council. I think with all these extra activities to supplement our academic profile, the school help you to be a really well-rounded person.

To relax? I do play video games…but as I get older, I just don’t have the urge to play as much as I did before. I think back in 2013 I peaked in terms of video games, sometimes eight hours a day…I don’t do that anymore!

What are your goals for life after DBS?

I was working on this just yesterday! My first choice is the UK, but UCAS [the University and College Admissions Service for the UK] limits you to five choices, and I don’t like being limited! So I am also thinking about the Netherlands, Italy or the US. I’m doing my SAT preparation for US colleges at the moment.

I want to apply for the best universities and colleges and I don’t intend on applying to any safety schools. Once that is settled then I can make some more decisions!

I’m Canadian and moved to Dubai coming up to four years ago. I was at another local school before for six months, but transferred here as soon as it opened. I live so close it was logical really! So I have been with KCD since day one and it’s been a great place all along.

What is special to you about this school?

Definitely it’s the community and the commitment of the teachers. When I first joined, my French teacher said I was at the standard that I could do the GCSE exam early. She invested just so much time working at it with me. I ended up getting an A*! So it was really cool, because I don’t think I would have gotten that in another school with less individual attention.

What are you studying in sixth form?

I’m going to be doing four A levels - in Psychology, English Literature, Music and Drama.

Chelsey, you’re nearly at the end of the first term studying for four A Levels. That is a lot of work! What has that been like?

It’s a huge step up from Year 11. For example, in my English GCSE exams I got 9 and 8 grades. Starting my A Level English in September I was getting Ds! That was a bit of a shock…you have to really work on it. Of course, it just takes time…it’s a two year course and I know it will get better. That said, I think the first term is definitely the hardest to get through!

On the other hand, it is such a release not to be in an exam year after our GCSEs! It’s like… “ok I can relax, just a little”. Year 11 was such hard work…especially the last term from March pushing onwards. You were studying all the time! There’s less pressure this term (for now at least!).

What are your ambitions for life after KCD?

I want to push myself in terms of performing arts. I am trying to get into a Conservatoire programme in the UK. It’s just so cool at this school, if I was back in my small town in Canada (which no one has ever heard of!), I don’t think I would have gotten the opportunities that I have here at KCD. I mean, I'm planning to go to England for this amazing programme…it’s insane! After that? Try to get into Musical Theatre as a career. My forte is singing and acting, but I do love to dance too.

KCD has been a great school for nurturing my passions in the performing arts. I have an amazing Drama Teacher, Miss Kelly, I just love her. She supported me through a rough time at the start of the year. My wonderful music teacher, Mrs Bourdillon, had to leave to return to her home country unexpectedly. I’d known her for three years and I was all broken down to see her go. She was the best! It was a great loss but thankfully we now have a new Music teacher, Miss Joyce, who is fabulous too.

After that, I was just so lifted, no one has ever sat me down and said “this is your future, if you want it and if you work for it”. I came home after school that day and said to my Mom, “this is it…this what I need to do”. Now, every time I see drama on my timetable, I feel like …YES, I’m so happy!

What is life like outside of school for such a busy student?

Four A' Levels definitely requires a lot of work, but if you stay on top of it it’s not too bad. I still have some spare time! I just did my Duke of Edinburgh expedition, three days hiking out in the desert. I was able to take time off to just walk around and explore.

One thing that is great about this community is that most of our friends are so close by in Meydan South…if my brain is fried from studying too hard, I can call up my friends and they are just five minutes away. I love that.