IB Results in the UAE: The Big Roundup

IB Results have been officially released, the culmination of over two years of hard work by students, teachers and parents alike. WhichSchoolAdvisor.com experiences their joy, and thankfully far less often, pain too...
IB Results in the UAE: The Big Roundup
By Emily 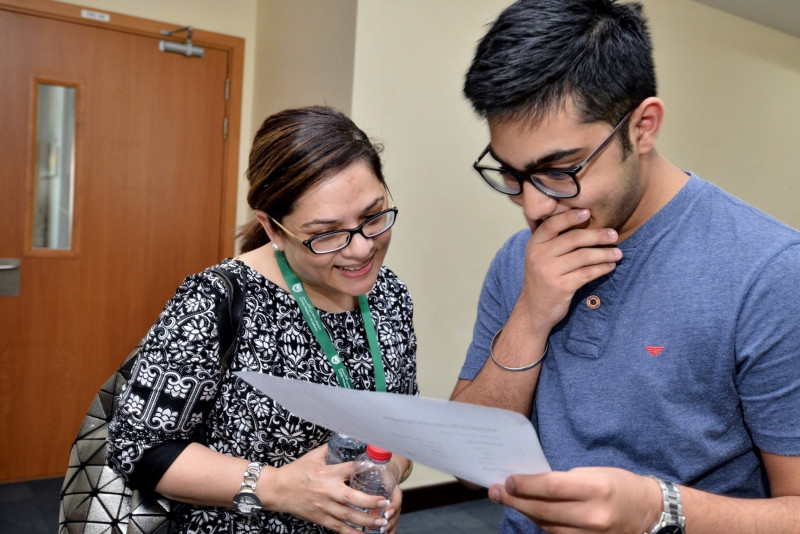 NOTE: This article will continue to be updated as schools decide to publicly release their IB results.

WhichSchoolAdvisor.com was at Jumeirah English Speaking School (JESS) Arabian Ranches as students' IB results were being released. We witnessed many smiles, and not a few tears driven, at least in part, by an emotional release after the rigour and the stress of an exam like the International Baccalaureate had finally run its course. The journey had been intense. And it was now, officially, over.

JESS's IB cohort for the 2016-17 academic year was around 100 students and results were extremely impressive. The school’s overall average was 35.3 (out of 45 possible points). This makes it the highest achieving IB school in the UAE - based on results so far released. 92% of JESS students met or exceeded the global average of 30 points.

We got a chance to speak with Sara at the results unveiling and she was clear that it's critical to take advantage of all of the help that teachers offer, including "all additional study sessions and revision sessions."

Sarah admitted to WhichSchoolAdvisor.com that she couldn't have achieved her results without "my parents' support and my teachers' support." Her words of advice? "Start revising as early as possible!"

Sara is heading to Oxford University to study Philosophy, Politics and Economics.

JESS Arabian Ranches has a second IB Topper, Kareem Kubeisy who also scored the maximum 45 points on the exam after remarking. It's really quiet exception for one student at a school to score the maximum number of points on the IB exam, never mind two students. Kareem will be headed to Columbia University in New York City in the fall.

For those students who did not get the results they were expecting, the night can be one of huge disappointment. We spoke to parents of students who were in tears, some having just missed their top choice university by one point. Although the IB offers a regrading option, it does not guarantee a change in score and it is not how these students imagined two years of labour intensive work culminating.

As one parent of a disappointed student explained, "the marking for the IB exam is extremely stringent and everything matters, even handwriting. If the examiners can't read what you write, they can't mark it," so it's critical that when it comes time to sit the exams, that students make an effort to do their best, even with their handwriting.

"The marking for the IB exam is extremely stringent and everything matters, even handwriting. If the examiners can't read what you write, they can't mark it"

Overall though, most of the students we spoke to were happy with their results. Their advice to up and coming IB students was clear, as Samira, who received results that she was quite pleased with, summed up, "Do everything you can so in this moment you know there's nothing more you could have done. All of the work does pay off in the end but don't be afraid to dip in and out of other activities to bring balance to your life because it's a lot of work."

Although not on the ground, the WhichSchoolAdvisor.com team has been able to get additional schools' IB Reports for comparison. Few schools have such a public envelope opening event like JESS, even though it really does work. It is a very fitting end to the hard work and rigour of the International Baccalaureate.

The Taaleem School Group certainly had the results to celebrate, recording strong scores across its four IB schools. Six students at Raha International School achieved 40 or more, with two of those students achieving a score of 43. Only 1 percent of students who take the IB achieve 43 points or higher.

From all GEMS Education schools combined, a total of 387 students achieved their IB Diploma, a 20 percent increase on 2016.

The average IB grade for its schools, however, has not been released by GEMS Education. This is a shame as it is not possible to benchmark the performance of its schools without this information.

The British International School Abu Dhabi celebrated its results with an IB average score of 32.  Its highest achieving student, Tanya Mathur, scored 42 points which places her in the top 4% of diploma candidates worldwide.

Aldar Academies Al Bateen Academy in Abu Dhabi achieved an average point score of 32.3. Five students secured a point score above 40 out of a possible 45, including twins Marius and Saulius Pakstyswho achieved 43 and 41 points respectively.

With an average score of 35 points (following remarks which raised the average by 1 point) Repton School Dubai is the second highest performing UAE IB school in 2016/17, close on the heels of JESS AR. Impressively, 13 percent of Repton IB DP students scored 40 points or higher on their exams with its highest performers achieving 42 points out of 45. "Almost all" results were over 30 points - the IB DP average.

At Emirates International School, Meadows a large number of students have been celebrating with the "best results in EISM history", a "testament to the hard work and commitment of our students, teaching staff and parents", the school told WhichSchoolAdvisor.com. The average for the IB DP at EISM in 2016/17 was a very credible 33 points, one more than last year. In total 17% of its students scored more than 40 points, and 96% completed the Diploma with a pass.

Last (for now!) but by no means least, comes Innoventures Education schools have just released the results of their IB schools in the UAE. At Dubai International Academy (DIA), 17% of the IB students achieved a score of 38 points or more and almost 76% of the graduating class of 130+ students has exceeded the world average of 30 points.

DIA had almost 36% students with a score of 36 and above and the average score for all Dubai International Academy students was 33.7 points. - a very good result for the school indeed. One of the school's students, Rohan Goel, scored 44 points, an almost perfect score. Rohan will be studying a dual degree with economics at University of Illinois at Urbana-Champaign in the fall.

Raffles World Academy did not release an average for all students however the school does note that "almost a third" received a score of more than 36 points and 69% exceeded the world average of 30 points. Zuhdi Alkhatib, an Emirati student at RWA, achieved an outstanding score of 41 points. Zuhdi is moving on to the Royal College of Surgeons Ireland (RCSI) to study Medicine.

Note: If your school wants to share its IB results with WhichSchoolAdvisor.com, please do send the details to us. We will add your scores here, and to your review. Email: [email protected]