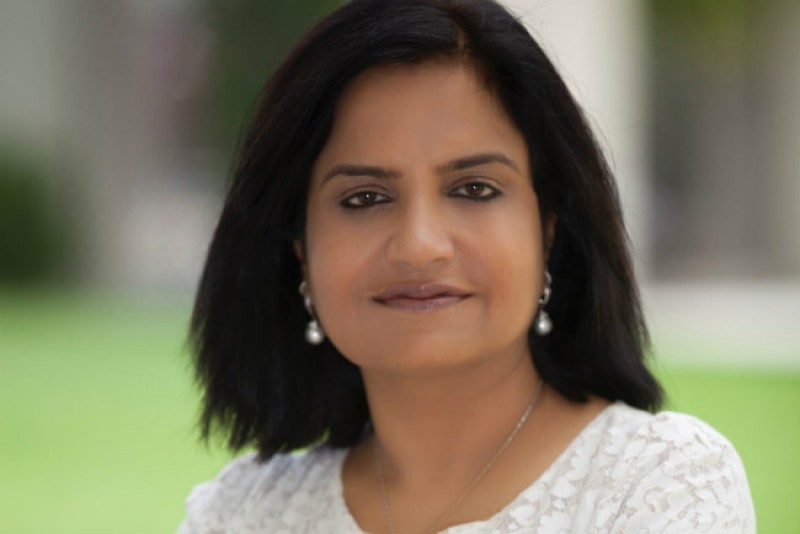 “In this country, if you can dream it, you can do it,” says Poonam Bhojani CEO of Innoventures Education, a woman who certainly must dream very ‘big.’

With four successful international schools and a further nine nurseries, Bhojani is one of the most prominent women in Dubai's education sector today.

But when the young Poonam Bhojani, the daughter of a UN diplomat, first arrived in Dubai, she had no plans to work in education.  “I came directly from Silicon Valley... I had dreams of becoming a Chief Information Officer but worried that being a CIO in Dubai would mean my career would be over.  In fact Dubai has been an exciting journey from the start for me. Within a week of landing here I had the job of my dreams in the IT industry, and I found myself whizzing around the world - Hong Kong, Sweden, The Netherlands and within the Middle East.”

Everything began to change though, once she had her two sons which meant a complete shift in priorities. “I gave up the life of travel as I felt my little children needed time with me. I felt there was no point in having a high flying career if that meant leaving my children at home neglected. I became mum for 2 to 3 years.”

“I was still doing interesting things though, I worked on setting up UAE’s first e-commerce enabled website and also was subsequently the technology interface for UAE’s first smart debit card launch... “But these are all details,” she says. "First and foremost I was mum, chauffeur, cook, party organiser, the whole role, and I loved it! It was one of the best times of my life.”

Once an entrepreneur and business woman, always one however. I was the sort of mum who was always in the school corridors looking for ways to improve things... I realised pretty quickly that while the education my children received was good, schools were capable of doing better,” she says.

“This began driving me. I became that sort of mum always in the school. I wanted my children to be really challenged, yet I couldn’t find somewhere to do this. My youngest boy went though a few schools, 'because of his obsessive mother',” she laughs.

It was 2005 and although Dubai was expanding exponentially there was still no full IB curriculum schooling available. “I really wanted an education, not just for my children, that was truly rigorous, holistic, and that took ownership of the whole child, yet at the same time international and focused on building values as well,” she says. “I watched my older son trying hard to learn the river systems in the UK and I thought why? We should be learning about the world, or closer to home, a Gulf perspective.” She wanted a truly international environment.

After researching various curricula Bhojani set her heart on the IB system. She says, “the principles of the IB; the ‘international-mindedness,’ the rigour... children experience what it means to care for those less fortunate than themselves. They’re explorers, inventors, investors, environmentalists and ecologists,” was exactly what she was looking for- for her sons.

And so, in 2005, Dubai International Academy (DIA) was born.

The timing was very auspicious: The new school also hit Dubai at a time of rapid growth and a squeeze on school places. In 2005 there were not enough school seats to go round. The city was sucking in workers - with families - from around the world. Those global workers were also open to the idea of the very global IB - still a relatively new curriculum at the time.

“The world was different then and so was Dubai. Globalisation in general had been growing at an exponential pace at this time and due to the geopolitical changes in the world. Suddenly this part of the Middle East has become a thriving international hub and the whole idea of internationalism has become very strong in the DNA of Dubai. That has made curricula like the IB very popular,,” she says.

With the winds blowing in the right direction, DIA did very well from the outset, something that no doubt helped with the investment into the project.

That initial investment would have been considerable. Starting a new school is an expensive affair, even in a Dubai that at the time did not have the KHDA and the hoops investors today need to jump through to establish themselves and start a new school. Poonam, with her husband, worked on the project initially and were "fortunate to receive the support from friends who have remained investors in Innoventures Education.

However it was the decision of the chairman of Emaar Properties, Mohamed Alabbar, to build a school in Dubai’s premium expatriate community – Emirates Hills – "that really gave us the opportunity to create Dubai International Academy (DIA)"...

Since its early days, DIA has focused on providing a holistic, child centred education and this year was rewarded with its first Outstanding rating by the DSIB, in the process the school became the first ‘pure-IB’ school in Dubai to receive the KHDA’s top accolade.

“Really we’ve been working in parallel across our four schools; those have this year improved significantly and reached a level of solid good... the building blocks are now in place, and now it’s just a matter of time before they take that leap forward,” says Bhojani.

“At DIA we have very strong IB grades; we have all students taking up the IB Diploma Programme and Courses, not just the best students.”

“Over 10 percent of the 2015 cohort has over 40 points and yet we’re a very inclusive school. We take students from all backgrounds, nationalities and learning levels, we believe that every child is gifted, it’s up to the school system to make them exceed their potential.”

“We believe learning your mother tongue is very important, and right now have over 400 students at DIA are learning their mother tongue during the school day and a further 1200 across our other schools in after-school activities.”

“We also have around 40 students doing the bilingual diploma (two language As) the highest category of Diploma.”

DIA is also rightly proud of its university placements, which last year saw 17 of the top 50 universities accepting around 50% of the Diploma cohort.

She says, “over the years we’ve had, Cambridge, the Ivy Leagues -Yale, Columbia, U-Pen & Princeton, Stanford, Tufts, University of Chicago, John Hopkins, George Washington, the only one we haven’t had is Oxford, although every year we have been getting at least one Cambridge admit.”

“Cambridge is a very big deal for us as we’re obviously applying with the Diploma not A Levels,” she says.

Development has also taken place further down the school, the most notable of which this year must be the testing of, and implementation of a brand new MYP assessment programme.

Innoventures Education grew from one school to three schools and nine nurseries when Emaar transferred the management of Raffles World Academy, Raffles International School and Nurseries to the group in 2010.  Collegiate American School was established in 2011.

Bhojani says it was a tough time. Initially Emaar had established an ‘education wing,’ and she feared that it would request DIA back from us because of its location in Emirates Hills, an Emaar  development. Things didn’t quite work out that way and instead, Innoventures Education ended up taking over the management of the Emaar Education portfolio.

Handover she says, “was seamless". We minimised the change, continuity of staff was the key element, almost all stayed on with us”.

“What they (the schools and nurseries) needed at that time was good resourcing... a higher degree of this child centred approach, more technology, STEM and STEAM, and they picked up very rapidly.”

“Our aim is not to expand wildly... we are focused on quality. Our size is large enough for us to continue to build on quality without having to expand on quantity; we are content with this size.

“Over the past 12 months we have been wholly focused on raising standards and accreditation. Raffles International School has had the BSO accreditation and will be getting accredited for CIS in the forthcoming academic year. We have completed CIS accreditation and the IB PYP re-authorization in Raffles World Academy.

"This is a very big deal for us as it assures our communities of our quality standards and enables us to further improve on our educational offering. It provides an international stamp of quality.

“International accreditation has been secured in all the schools... because what does it really mean when you say you’re a provider of world class education, if you cannot back that up, and you don’t seek accreditation?”

As we wrapped up the interview WhichSchoolAdvisor.com realized that in many ways Bhojani has not changed what she does for the last 15 years, only instead of being the mum always in the corridors looking out for her own children, she now works her way across multiple schools and multiple corridors seeking to raise the quality of education of tens of thousands of students.

Bhojani is someone who clearly sees longer term and builds brick by brick. She is not in a rush but able to make those gradual improvements that - with time - pay off. The Outstanding rating for DIA is not an end game, just a milestone. Talking with Poonam Bhojani has made us think what you can achieve if you have a plan and work at it consistently. It has been insightful and a pleasure. Above all however it has been an education.