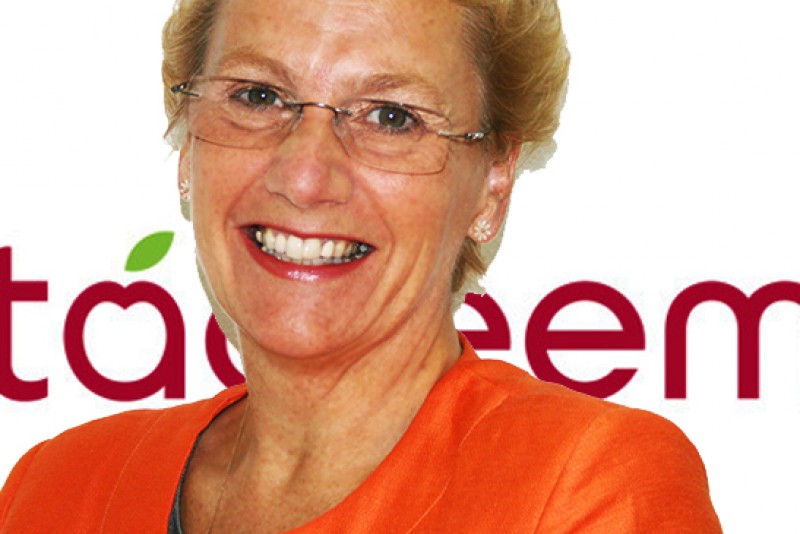 In the first of a series of interviews with school leaders from across the UAE, WhichSchoolAdvisor.com met Ros Marshall, the CEO of Taaleem, to discuss education within the emirates, and within the Taaleem group itself.

Ros says she didn’t have to look far for inspiration when she took office at Taaleem. “I arrived at my new office and there was this picture of a quartered apple,” she says, pointing to a picture above her desk, with sections labelled – pioneering, spirited, professional and nurturing. Right away she says she realised; not only would this particular piece of décor be staying, but it would also be the foundation of her first year at the helm. As a British, non-Muslim woman, Ros says she was acutely aware of being the complete antithesis of outgoing predecessor and founding CEO Ziad J Azzam. However, deciding to trust the board’s decision in her appointment, she set about tackling Taaleem’s values ‘her’ way. With a focus on growth, opportunities to excel and customer endorsement she spent 2014 developing the company’s portfolio of eleven schools. Much of her focus has been on building the capacity at Taaleem. “Developing our people” she says, adding, “more training, more support, encouraging them to flourish and raising standards. We want to grow more people through the organization, keeping our talent here in the UAE.” As yet, Taaleem has no school KHDA rated ‘outstanding’ and, Ros admits achieving this is one area she’s driven to change. “Top down, the way staff are managed, working with leaders, looking at what we need to get to ‘outstanding’...we’ve brought in a new academic team, and firmly believe we are much better prepared in our understanding of the requirements and how we can get there.” Although she notes that while new systems and processes to measure excellence are now in place, reaching ‘outstanding’ status across the schools will still take some time. “The talent management agenda is a big part of our future,” she says. And surely one of the biggest benefits of having eleven schools with differing curriculums is the potential for staff movement within the group. “We want to look at all our leaders and help them become great leaders.” Although the UAE’s favourable weather and absence of tax, has traditionally drawn teachers to the city, Ros is acutely aware attracting the right people this year could prove significantly harder. She believes, the recent Reem island attack and school massacre in Pakistan have changed people’s view on coming to the region. “There’s a lot of ignorance about the UAE” she says. “We’ve had people coming out from France, cancel, when the French government decided to put something up about it.” While she admits it’s often difficult to reassure people, without sounding patronising, she says her policy will remain based around; safety and building confidence. “Attracting people to Dubai is not really just about salaries anymore it’s actually about ‘where’ it is, and reassuring them about the true Islamic religion and the true Islamic people.” While the American curriculum remains the UAE’s fourth most popular, behind IB, British and Indian curriculums, the company recognises for many Emirati parents, who themselves studied in America, the US still hold a powerful draw. Taaleem’s only US curriculum school, the predominantly Emirati populated Al Mizhar American Academy, will see its accreditation with the New England Association of Schools and Colleges up for renewal again soon. In response, Ros has turned her attention to the school’s curriculum and how it’s being taught. One of the issues being resolved at the school is that while the American curriculum’s common core is an amalgamation of numerous States, individual teachers have naturally brought their own personal ‘State’ experience with them. She admits in the past it’s often been, “Difficult to track the way teachers have been teaching the curriculum and now [Taaleem is] working on tracking it.” On teaching Ros says, “It’s changed immeasurably since we were in school, it’s no longer about didactic standing in front of the board teaching children in rows, [today’s teachers] are ‘facilitators’ of the event.” Children today can look up the information they need on net, “but it’s the teachers’ role to say how they apply that knowledge - and make the connection between the different pieces of knowledge.” She believes the way teachers are taught is evolving,” it’s more about how do children connect the dots. Today’s classrooms are all about apple devices and mobile for learning.” Of the future, Ros says it’s all a journey. She’s fascinated by the UAE and its continued drive for excellence. She says she’s been studying the 2021 objectives Sheikh Mohammed has outlined for the nation and is excited by the plan to drive the UAE’s schools in to the world’s top 10. While countries especially in Asia achieve their success utilising more traditional methods, she’s excited by the UAE’s plans to use technology, saying, “while the private schools pioneer these activities, the public schools gain the knowledge too, which makes it a very exciting place to be.”