I really enjoyed writing about our first week in ‘home school’ – it proved to be a little therapy for this Mum in all the madness.  Since writing it, we’ve all learned one very important thing: that our children will continue to be educated online for the remainder of Term 3.  The long haul has most definitely begun...
This article is part of an editorial series on Covid-19 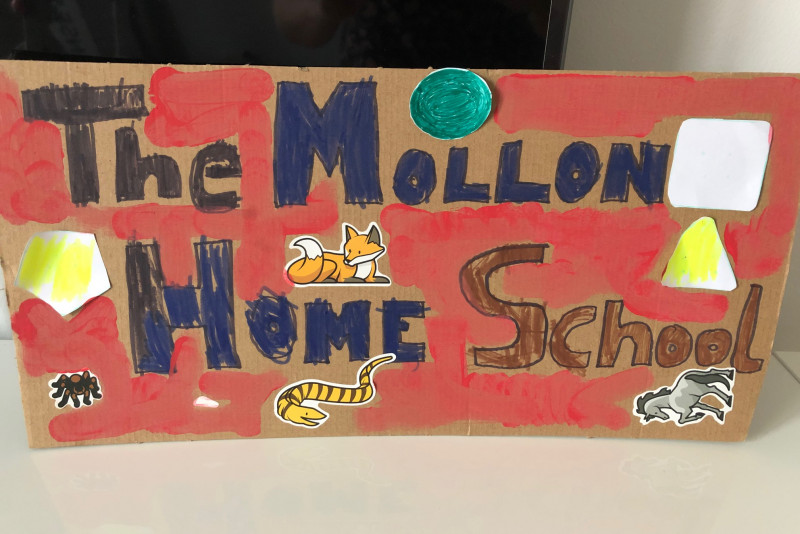 After a positive first few days in The Mollon Home School, our second week was, how shall I put it…bumpier?  Yes, for want of using a stronger, unprintable word, bumpier will have to do.

When the news broke that all children in the UAE would continue with online schooling for the remainder of this academic year I, like most parents, needed a few minutes to take stock.  It’s really one thing to mentally wrap your mind around supporting their learning for a couple of weeks, but an entire term?  Just how?  If there is one thing I have come to realise, this is an extended exercise in patience and managing emotions for every one of us.

The emotional aspect of home learning has been very apparent in our home this week.  The novelty factor that made the first few days of home school new and exciting is no longer there. Home schooling has become a little more ordinary.

My oldest son, Finn (who really breezed into the logistics of online learning during the first week) took the news that he would complete Year 4 at home quite well at first but, late one evening, the emotions and worries burst out.  “The last few weeks have seemed sooooo long” he said tearfully “and now I can’t see my friends until September!”  More than that, it had hit home that we couldn’t really say with any certainty how long it would be before he could see his much loved grandparents and family in England again.  When you are nine, it’s a strange, confusing thing for your parents to not have all the answers.

Lastly, (and this was a real surprise) my lovely young man was desperately worried about the Expo!  He turns 10 around the time the Expo was due to begin, and he’d already mentally planned his celebrations around it.  It’s something we’ve talked about at home a lot (his Dad has incredibly fond memories of Expo 88 in Brisbane… I think we’ve built up the anticipation around that!) and clearly Finn saw it as something of a milestone for him too.  It’s certainly interesting to realise what plays on their young minds.

I always say that our children are more resilient than we give them credit for, and Finn has certainly proved this to me this week.  We asked him to list the things that he thought would make it all a little better for him.  A Zoom call with an old friend and some daily time away from his little brother (find me another eldest sibling who can’t empathise with that!) were high on the list.  Much as my two get on, I realise that I rely on Finn to fill the constant ‘play with meeeeeeeee’ requests from the younger brother rather too much.  Sometimes he wants to, but he’s older and sometimes he just wants to chill and read or play his drums, and that is ok.

Week two saw my five year old son rebel a fair bit against his online learning programme.  If I’m honest, I found it hard too.  In the online learning survey the WhichSchoolAdvisor.com team have recently conducted, we have found a very broad range of at home learning experiences for young children.  Some families feel their school is giving too much work and being too prescriptive, others feels that there’s not enough and they are struggling to fill the days.  In week 2, we fell into the latter category.

Clearly, Early Years at home is a real challenge for schools to get right!  Whatever learning I offered to Wilfred was resisted with ‘no’, ‘later’ ‘it’s babyish!’ (with a four year age difference between my two boys, the younger often describes his own activities as babyish, which is a shame but understandable, I suppose!) and an awful lot of time hurriedly planning things to do and trying to prevent him from distracting his older brother.

I’m glad to report that school have taken on board feedback from us and other parents and week 3 has got off to a far more positive start – phew…!

Learning aside, it’s definitely the emotional impact of life confined to home that is beginning to concern me, for both boys, but especially five-year-old Wilfred.  As any Early Years teacher will tell you, for young children these are the years that their future ability to respond to friendship issues, difficulties, challenge and change are formed.  These attributes aren’t taught, but acquired in the hundreds of small interactions they have with their friends, their parents and other adults each day.  There’s a huge chunk of that missing right now. There’s been many times this week when I’ve seen him really, really need another child of a similar age.  We can do our best, but what they can provide... we simply can’t.  So for his sake I’m already hoping that the first two weeks back at school in September are turned over to play and play alone!

For my husband and I, we’ve had emotions to manage too.  Feeling guilty about our children being cooped up inside, missing their friends, is not terribly logical given the circumstances, but I would hazard a bet that most parents feel the same way.  Inevitably, we have snapped at silly things, only to feel guilty all over again. Isn’t guilt one of the overriding emotions of all parenthood?

Nonetheless, there are many positives emerging too.  We’ve become much better at just being with our children.  Never again will filling one weekend at home seem daunting!  Pfft!   We can do that!  We’re all letting loose and just being silly with them, which is great fun.  A great example - whilst writing this piece I stopped to investigate what sounded like a riot, only to find it was our lovely nanny, Angela, trapped firmly inside a box that was used to deliver an armchair not so long ago.  The boys thought this was about the best fun ever... I’m not sure she agreed but we rescued her and she is still smiling.  As we all are... most of the time!