Dubai College's construction of the new C-Hub building has begun with a ceremonial groundbreaking, attended by Dr Abdullah Al Karam, Director General of the KHDA. The progressive building design highlights the school's educational direction, with a focus on collaboration and technology.
Work Begins on Dubai College's New C-Hub
By Susan Roberts 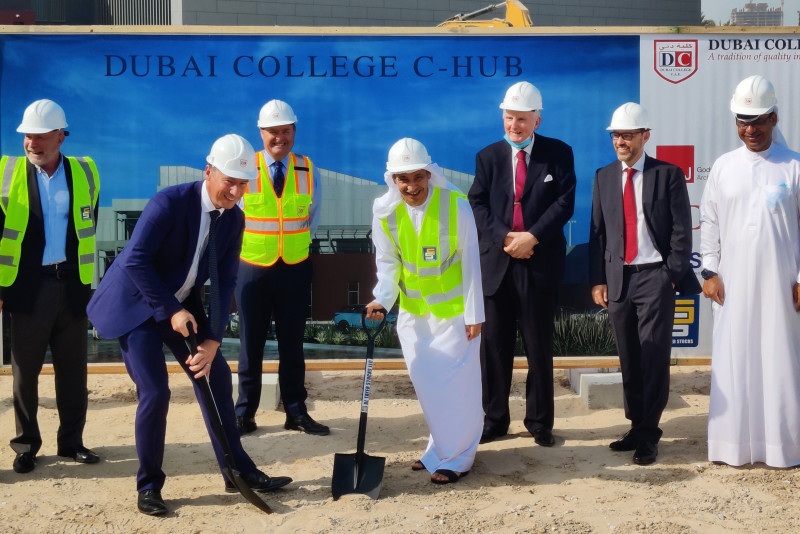 Dubai College has marked the beginning of construction of its new C-Hub building in a ceremonial groundbreaking. The new, three-level building, which takes the place of the demolished C-Block, is due to be completed by June 2023 and be built over 5200 square meters. It is described by its design team as "a collaborative, connected building where boundaries are dispensed with, and blended learning encouraged".

The Dubai College campus has had a significant overhaul over the past seven years, as part of what Headmaster Mr Michael Lambert referred to as ‘Project Campus 2030’. This will increase the school’s capacity by 25% since 2015, taking it to a maximum of 1100. Mr Lambert remarked, light heartedly, that the gradual upgrading of the campus had resembled “the world's largest game of Jenga”, as buildings were demolished, and replacement facilities were constructed.

“We began the design process by sending out a questionnaire to parents, teachers and pupils to get feedback on what they felt was working well in the current campus, and what wasn't working. Sustainability was a major feature, the inclusion of green spaces, bigger classrooms, more social spaces, as well as very practical details such as charging points in study spaces.

The incorporation of sustainability in the C-Hub could not be merely a “rubber stamping exercise”, Mr Burnside remarked, given its importance to all stakeholders. The design’s functionality, in terms of energy use and promotion of wellbeing, is set to make it Dubai College’s first LEED Gold building.

Mr Burnside went on to explain that the building has been designed to bring together different departments; art, computer science and mathematics will sit side by side, the layout intended to lend itself to collaboration between departments. The ground floor houses the new school library, or 'learning hub', providing a range of study spaces for collaborative and individual study.

Dubai College's Project Campus 2030 is still very much considered a work in progress. Following the planned completion of C-Hub in June 2023, the space that occupied the school's former library will be next in line for renovations...