The second edition of KHDA's Well-Being Census has been expanded to include older children and adults. The survey has found that the majority of students being taught in the emirate are happy - but 19% are not...
Majority of Dubai School Students Happy- KHDA
By James Mullan 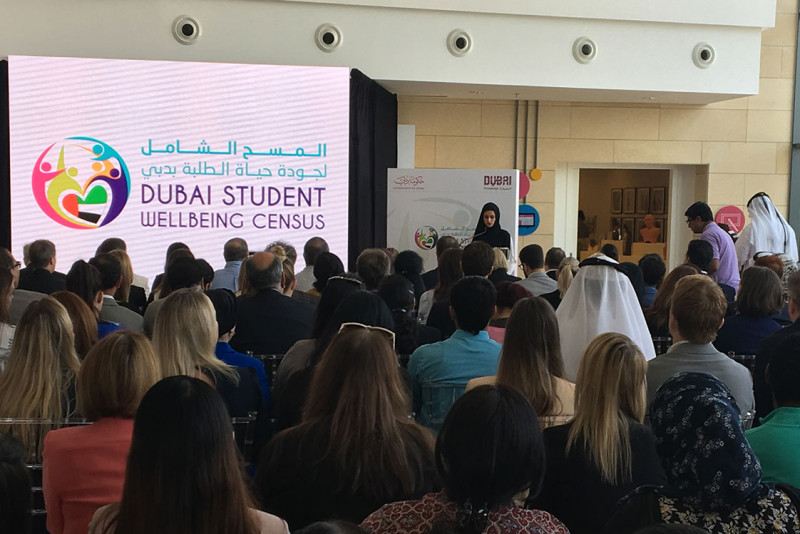 The overwhelming majority of students in Dubai schools are ‘happy’, according to the ‘Dubai Student Well-being Census’ which was published by KHDA on Monday.

The survey found that that 81 per cent of students are happy, down slightly from 84 per cent from the previous year’s census. The results this year included older children from grades 10 to 12 for the first time.

The KHDA shares the results of each school’s individual findings with the particular school and management who may then choose to share these findings with parents. The census is conducted by the KHDA in partnership with the Government of South Australia.

Recommendations to improve aspects of each school’s wellbeing programme are based on the census results.

Uhoud Khalfan Al Roumi, Minister of State for Happiness and Quality of Life, speaking at the launch of the census findings said:

“Well-being in education receives special attention in our National Agenda because we know that conventional education no longer suits our interconnected, fast-changing world …. Knowledge is no longer the sole objective of education. Life skills, such as emotional and social intelligence, grit and resilience, optimism and perseverance, and many more, have become indispensable.”

She added: “Therefore, we need a holistic approach that shapes well-balanced, positive citizens of tomorrow, and well-being sits at the heart of this approach.”

Al Roumi said last December the Ministry launched a national ‘Well Schools’ network that “seeks to foster a culture of well-being by focusing on a set of well-being principles under four key pillars — students, teachers, the school environment and the society”.

She added that member schools receive a range of support services to help them implement activities and initiatives in line with these key pillars. The network also grants the ‘Well School’ mark to distinguished schools to highlight their outstanding effort in fostering well-being, she said.

This year saw the KHDA launch the the adults’ survey, in collaboration with The Wellbeing Lab. This survey involved 13,522 participants — 69 per cent of them teachers, seven per cent school leaders, 17 per cent in administration or other departments, and seven per cent teaching assistants — in 171 schools.

It revealed that 43 per cent of adults are “not feeling bad, but just getting by”, while 5 per cent are “really struggling”.

Dr Abdulla Al Karam, Director-general of KHDA, said education ministers meeting in Davos recently “all agreed that we have to change what we measure in education”.

Dr Al Karam also said that the first results of the Dubai student census in 2017,

“...taught us that the students’ well-being does not only depend on the well-being of the school or the teacher, but on the whole community working together”.