The UAE is still falling short in TIMSS benchmarks, but Dubai private schools are shining a light for the emirates, with Indian curriculum schools, followed by UK schools, in Dubai leading the way.
Dubai Tops TIMSS target; Indian Schools Lead
By David Westley 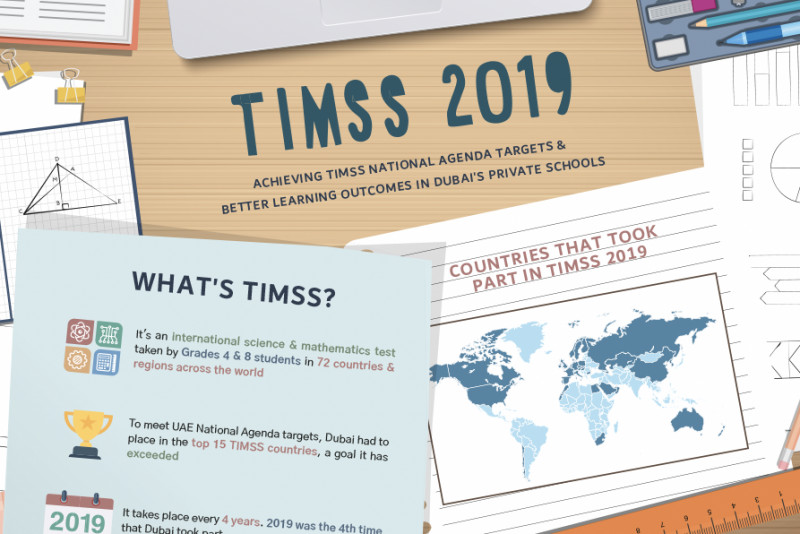 The latest TIMSS results for Science and Maths at Grade 4 and 8 show strong improvement for the United Arab Emirates, but only for the specific subset of private schools in the emirate of Dubai is the country a world leader. Elsewhere, scores fall below the dividing '500' line that demarcates above and below average performance.

The UAE as a whole scored 481 points for Grade 4 Maths, placing it in 43rd position out of 59, well below the 500 centre point. Dubai's private schools, however, scored 544 points, placing the emirate in the equivalent of 10th place overall, just behind Northern Ireland, and ahead of Latvia. Abu Dhabi schools, conversely, with a score of 441, would fall into 52nd place, equal with Chile. Singapore schools topped the list with a score of 625, and Hong Kong schools followed (602). Russia came 6th, Northern Ireland 7th and England 8th.

In Dubai UK schools fared the best with an average of 565 points, followed by Indian schools (562) and then IB schools (554). Only MoE schools fall below the 500 centre point for Grade 4 Maths, with a 495 average.

For Grade 4 Science again the UAE fell well below the centre point of 500, with a score of 473. Dubai's private schools however, fared very well with a score of 545, above Nordic powerhouse Latvia, and the likes of the USA (539, 9th) and England (537, 12th), taking the equivalent of 7th place. Abu Dhabi schools scored 418, placing them in the equivalent position of 53rd, just ahead of Kosovo. Singapore again topped the list, while the Republic of Korea came second. Nordic countries Finland, Latvia and Norway held positions 6th, 7th and 8th respectively.

In Dubai, Indian schools scored the highest at Grade 4 Science, with 568 points, followed by UK schools (564) and then IB schools (548). All curricula scored at or above the 500 centre point.

For Grade 8 science the UAE scored 473, placing it 26th overall (out of 40). Dubai's private schools again scored above the centre point with 548, putting them in the equivalent of a heady 5th position. Abu Dhabi schools scored 420, placing them in the equivalent of 36th. Singapore again topped the list (608 points), Taipei came second, and Japan third. The United States came 11th (522), while England came a disappointing (for it) 14th (517).

In the UAE, at Grade 8, Indian schools again scored the highest, with an almost world-beating 598 points, followed by UK schools (579) and then IB schools (560). All curricula scored at or above the 500 centre point.

Finally in Grade 8 maths, the UAE came 27th (out of 40) with a score of 473, but Dubai came the equivalent of 6th with 545. Abu Dhabi schools scored 418, that would place them in 35th, just ahead of Egypt, but behind Jordan. Singapore again headed the table with 616 points and Asian countries in general dominated: Taipei, Republic of Korea, Japan and Hong Kong taking positions 2 to 5.

In the UAE, Indian schools took over from UK schools in the top position for maths, with 588 points, followed by UK schools (566) and then IB (557). MoE schools again fell below the 500 centre point for maths.

TIMSS is an international science and mathematics test taken by Grades 4 and 8 students in 72 countries and regions across the world.

To meet UAE National Agenda targets, Dubai had to place in the top 15 TIMSS countries, a goal it says it has now exceeded.

Dubai's schools have now improved with every round of TIMSS in maths, while in science, the emirate had only one dip, for Grade 8 science in 2011. Probably the biggest improvement has been made in Grade 4 science, which has jumped from 452 points in 2007, well below the 500 centre point, to 550 today, a score well above the average. Over three-quarters of Dubai students now score above 500.

Interestingly there IS a correlation between the KHDA rating and performance. For Gr 4 Maths, for example Outstanding schools score 596, while Weak schools score 516. It is a similar story for science, and for maths at Grade 8.