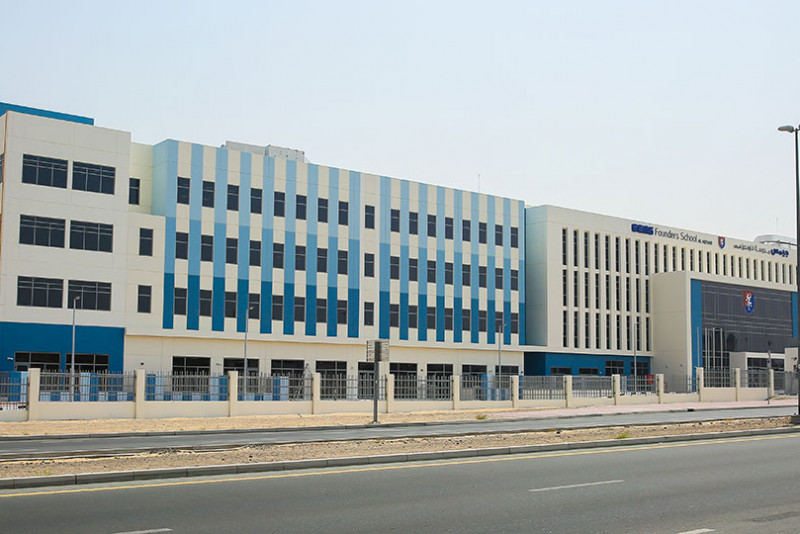 One could say that GEMS Founders Al Mizhar is a school focussed on the foundations. On the day of our visit, not only were all the structures complete, but classrooms were ready, and perhaps most impressively, 1250 children were on the roll to join the school in September.

Having a finished building two months in advance is not common, and can only be a dream come true for the management, leadership team as well as the staff who have the time to refine and prepare for the new year. Clearly GEMS Education itself is a factor here. This is not a school group unused to new school builds and launches.

Moreover, in a year where some schools have faced challenges with enrolments, GEMS Founders Al Mizhar has done extraordinarily well, and is close to hitting its target of 1,500 students for September 2018.

WhichSchoolAdvisor.com was naturally curious as to what GEMS Education, and the school's leadership team, have been doing so right. We used the time we had with Principal, Nigel Cropley and Vice Principal Jeremy Hallum, who led our tour of the new school, to find out.

We started our inspection of the school with the outdoor play area that leads into a parent café which opposite the main reception.

We then moved on to the Foundation Stage reception and its classes. In terms of build these are all ready, just waiting to be fully kitted.

Almost half (600) of the 1250 enrolled children will be in the two Foundation Stage (FS) year groups.

FS1 is composed of 3 and 4 year olds, although children can join as young as 2 years 8 months. FS2 classes are for 4 and 5 year olds.

A total of 250 children will be in one of nine FS1 classes, while the 350 FS2 pupils will be in 15 classes. Given the dominance of early years, this is a school where getting the foundation stage classes right is of paramount importance.

The FS classrooms are set in a quadrangle, with wide corridors and a central outdoor classroom. Principal Nigel Cropley was keen to point out that this outdoor classroom had been designed with educational, play based activities in mind and that the Foundation Stage will have their own separate free play area too. The team were delighted with the resources on order for this area, including mud kitchens, outdoor musical instruments, construction resources and more.

Ideally, we would have liked to see the classes surrounding the outdoor classrooms with doors opening out into the space, allowing free-flow of indoor and outdoor activities. This is not possible currently.

The outdoor space will eventually have a stage for performances. It is entirely covered by a large sun shade.

The Foundation Stage will have its own library with both English and Arabic resources.

The Early Years Foundation Stage (EYFS) curriculum, has a real champion in the form of Vice Principal, Jeremy Hallum. Jeremy, who has moved to Dubai to take up his position, told our team:

“I was always a year 6 teacher, but in one of my previous Headships I decided to spend more time in the Early Years department, learning about the curriculum. I completely fell in love with EYFS. To me, it’s really one of the best curricula out there!”

While touring the school we could see there was abundant light, and a lot of space. The corridors had huge pin boards in various colours for students’ work to be displayed on.

The primary area of the school is on the ground and first floor of the building, with its own library, play area, music rooms, science labs, dance studios and other specialist rooms.

The main dining hall of the school is adjacent to the indoor FS play area and there’s no lack of space here either.

Above the main reception, on the first floor is the school’s Innovation Centre. Explained Mr. Cropley:

“This is an area which we are sure will be a hit with the children. This will have lego based learning tools, 3D printers, computation thinking and coding resources. This centre will be accessed by students from Year 3 onwards and we are very confident that a lot of learning will take place here.”

On our tour we also saw the massive multipurpose hall that can hold at least four badminton courts. On one side a pretty big stage with all the light and sound equipment in place.

The school’s astro turf football pitch is also ready - and very inviting. We were only dissuaded from having a quick-kick about by the rather intense summer heat. Cricket nets are also up and good to go.

"We are not looking at our school to be just academically focused," Mr Cropley told us. "We want to bring the social, emotional and wellness aspects into the day-to-day learning as well.”

The third floor of the building will not be used in the first year as the school will start from FS to Year 9 in September. The huge sixth form common room on this floor, which has the most stunning view and a terrace, will be used for training and conferences.

Teacher recruitment has been finalised with 90 academic staff joining in August. “We know the school is massive and [initially] teachers may lose their way," said Mr. Cropley. "So to help teachers become familiar with the school, we have planned a treasure hunt during the first week of orientation!”

Teachers have been hired from the UK, Ireland, India and the Philippines. Wherever possible, they will have had prior experience of either the National Curriculum of England, or International Baccalaureate.

The teaching staff is set to join the school in August, receiving a three week curriculum adaptation programme ahead of the start of term. After that, teachers will be offered ongoing coaching and training to ensure best practice is maintained. The curriculum development has been guided and supported by the experienced team at GEMS Founders Al Barsha.

The total capacity of phase one of the school is 3,200 students and by the time it becomes an all through school, the capacity will be 4,800.

Located in Mizhar, with a number of established residential communities in the vicinity - Mirdif, Al Warqa and even its proximity to Sharjah - GEMS Founders clearly has a large audience to draw from. Its pricing is proving compelling too with fees ranging from AED 22,000 AED for FS1, rising to 29,000 AED for Year 8.

GEMS Education has uncovered a sweet spot in the Founders brand, with an offering at a price point that has now proven to be very attractive for a second time. That the school is pretty much ready to go two months early is almost as impressive as its enrolment numbers, and clearly very much testament to GEMS' hard won experience of launching new schools across the UAE.