WhichSchoolAdvisor.com meets Steve Ritz, the man behind the pioneering Green Bronx Machine, to discuss gardening in Dubai’s schools, innovation in gardening and why he thinks farming should be a career path every student should consider…
Steve Ritz & His BIG Plans For Dubai's Schools
By C Hoppe 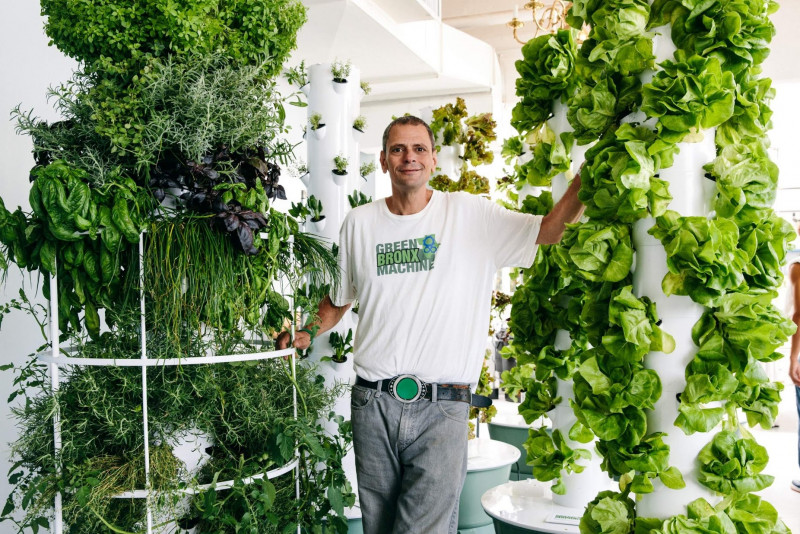 “You put a little seed in a child’s hand and it’s a promise that, that little seed is going to grow into a plant." Steven Ritz.

While Ritz was talking about the restorative effects of gardening with children in his Bronx classroom, he could very well have been talking about his Dubai debut at the ‘What Works’ event back in January 2016.

When the KHDA invited Ritz to attend the teacher conference, no one, especially Ritz could have ever envisaged the school gardening revolution he proposed would prove so fertile in Dubai.

At the time, there were a handful of Dubai school gardens, now a little over one year later, and there’s well over 50.

Yet even after numerous visits to the city, Ritz still doesn’t think he’s doing all that much.

“Just today I was at a school I visited a year ago, and the transformation has been incredible, the reception I receive here is just inspiring,” he says.

“We had a great teacher development training today at Apple International School, they brought in other teachers, from other schools, so it will impact teachers on the art and science of growing vegetables aligned to content area instruction…

The Ritz to Fame…
Ritz rose to international prominence in 2015, when he and his Green Bronx Machine project were shortlisted for the Varkey one-million-dollar teacher prize.

Ritz, an elementary teacher in a borough plagued by poverty, unemployment, obesity, broken homes and incarceration had developed a pioneering school gardening programme which was literally changing lives.

“The beauty of planting which for the most part was, if you put a seed in the ground, it’s going to grow… that is an important, fundamental experience for children who have never succeeded.”

From Soil to Vertical
“… The big question I have at the moment is how do you move the garden, the farm indoors?” he says. “And that’s one of the things I’ve been talking about [during this visit].

“The good news is it [growing technology] is not prohibitively expensive at all. It’s actually cost effective. And when you figure out the man-hours, labour and everything else, I’m amazed that people are gardening outdoors. Where I think the problem is, people are afraid of the technology… I think schools are afraid of vertical technology.

“Today I met so many teachers who had technical questions on gardening, I mean guess what? I didn’t know the answer!”

“The cool thing is there’s Google, there’s a phone call or a text message from someone who does know the answer.”

“It’s on the internet, so if children have a problem, they do what they need to do, they learn to use the internet resources appropriately.

“What I really want to grow is happy, healthy high performing schools, teachers, students and communities. I believe we can do that by growing food indoors.  I want that garden right in the class, the very epicentre of instruction. I want it there because whether a child or garden fails or succeeds there is a classroom and life lesson to be learned.

Vertical Technology
The driver for Ritz's interest in indoor technology is threefold. A lack of outdoor space, a lack of financial resources and the need to place the garden in what he calls the “epicentre of learning".

He started out, making his own vertical equipment.

“For many years I was the do it yourself king, I was kind of like the ‘Mgaiver of the indoor gardening space,’ which was great for me, terrible for my marriage. I spent hours innovating, but it wasn’t anything which was replicable. It was also getting in the way of teaching.”

So Ritz began to look at what was already out there and available off the shelf.

“With proven technology it meant I did not have to find ways to make it work, which meant I could focus on what really matters, teaching!

The Gardening Classroom
Ritz is pushing to go further: “I don’t want to put a garden in school, I want to wrap a school around a garden.

Everything in the garden is a lesson, and it unites the disciplines. "The reading, the writing, the math…the positivity, the mindfulness, today I was watching children meditate in the garden and they were meditating SO hard,” he laughs.

“The quality of teaching the quality of learning and also generating enough food so the children get excited about this, they can eat it, use it in school, sell it via a farmers’-market model, you know, be entrepreneurial...”

Our Future Farmers
Ritz passionately advocates farming as a career and the idea that in the future we will need tech-savvy, pioneering and artisanal farmers.

“We have to start realising that growing food is absolutely critical.”

“People don’t want to send their children to private school and pay tuition for them to do something they consider to be migrant labour or outsourced labour or peasant work.”

“But when you realise you can grow food in your school … you can control the whole process on an iPhone … somehow that becomes very interesting. That then becomes an end value proposition to the people who said I never want my children to do farming… I want them to get as far away from that culture as possible.”

“Because now it’s the 21st century, its artisanal and that’s cool.

"Food generators, food incubators that’s the kind of stuff which is really going to change the world.”

School Gardening: The Future
When it comes to the future of school gardening in Dubai, Ritz remains resolutely upbeat.

“I think Dubai is going to multiply what I’ve done a thousand fold. One of the things I’m really excited about here in the UAE is growing food commercially, with students. The food we grow here can feed labour camps, feed the society that surrounds us.”

“This possibility creates a spirit of positivity, a spirit of health and a spirit of happiness. It also ties into key challenges facing the economy: Food security, food safety, food sovereignty, food independence.

Having researched state-of-the-art growing technology, Ritz is aware of just how much it will assist the UAE in securing and maintaining the country's future food security. "We can grow food using water from air-conditioning now, I mean, zero net water farming, which when you think about it in the desert, is so important.

“The notion to me that we can use private education for public good is spectacular.  And I think if there is one society which is absolutely committed to it, then it is Dubai and the UAE.”

It understands that "if you want to change the world? Grow food.

“If you want to end hunger? Grow food.

“If you want to end poverty? Grow food.

“If you want an incredibly profitable career in the food space? Grow food.

“We all just have to stop being afraid of the technology. It is out there, we just have to embrace it and press the start button...”