One of the most eagerly awaited and anticipated new schools for 2018/19 is South View School. WhichSchoolAdvisor.com donned its hard hat and steel toed boots to inspect its progress...
Dubai's South View School Rising - A Hard Hat Tour
By Veathika 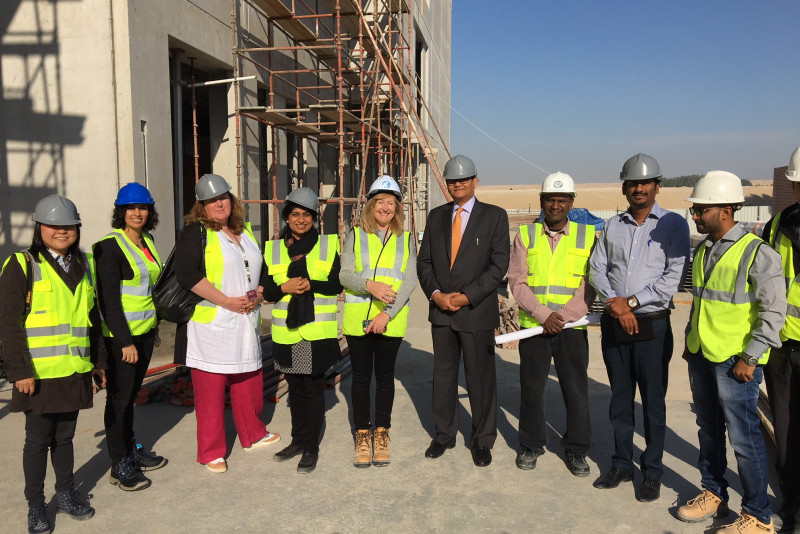 When we started touring the South View School construction site, it was cold and foggy but the team was happy and excited to be touring one of the most talked about new schools for the next academic year. The Director of the school Vinita Nayyar led the tour, joined by both Principal  Joanne Wells and the owner Dinesh Kothari.

Unlike many school projects we have toured over the last couple of years, South View is being built in one go. There are no phases to the construction. If all goes to plan pupils will arrive to a finished building and project.

The school is being built on an area of 200,000 square feet with a built up area of 132,000 square feet. And we enter through the main entrance that has the admin block on the left and primary on the right.

When constructed there will be four main blocks – an admin block, foundation stage block, primary block and a sports block. You can already make out the separation.

The foundation block on the ground floor has two wings, each class with an outdoor learning area and its own playground.

What struck us the most was the abundance of natural light that will flood into each classroom, and the huge playground just for the FS children.

“We were very particular with the design that accounts for education, so each class and outdoor area was designed with visibility in mind. We want the kids to be independent but also students should be in the line of vision of the teacher or any adult in the room,” explained Vinita Nayyar.

Built on a design philosophy of flow and movement, the school has both a sense of  interconnectedness and ease of movement.

“We wanted an organic structure where the child actually grows with the school,” added Dinesh Kothari.

Parents will have three drop off zones and there’s separate entry for secondary students.

The ground floor will also have grades 1 to 4 in the primary block and grades 5 and 6 on the first floor. There’s a centre courtyard play area for the primary, with toilets in the play area.

The first floor also has secondary classes and science labs. There will be six science labs and three theory rooms. The view from the science labs is that of sand dunes and Jumeirah Golf Estates.

There are pockets of skylights throughout the school, to get as much natural light as possible through the floors.

Outside the FS classes and behind the admin block is the sports block, with a swimming pool on ground floor, secondary multipurpose hall above it and multipurpose roof courts on the top.

The canteen/cafeteria is placed between the swimming pool and the field with windows on both sides.

“With extra curricular activities, parents who have their kids on either side can easily watch the students from the cafeteria while having a cup of coffee. That’s what I crave for while taking my kids for their activities, so we decided to put the cafeteria right in the middle with easy visibility,” explains Vinita.

The school will have three multipurpose halls – one for FS, one for primary and one for secondary. There won’t be an auditorium in the school.

“We wanted to give more space to each of our school level and therefore thought of utilizing the space to build three multipurpose halls instead of one auditorium,” Vineeta adds.

There will be an emphasis on sports with three tennis courts being built across the street, an ICC cricket academy on site as well an astro turf field for Football and Hockey.

Located within the Remraam community, South View School will have an immediate catchment area for enrollment.

The school will start with FS to Year 8 in September 2018 and will open more years in subsequent years.

So far 30 students, mainly in the primary grades have already registered for September 2018, while 200 more have registered interest.

At capacity South View will house 2,000 students across 6 forms in FS and 4 forms from Grade 1.

“We have made early appointments and are looking at the others. Key is to look beyond the CV. Everyone looks amazing on paper but we need to see who’s the right fit,” says Joanne.

South View would be a big project for many school groups, but not IAS which is used to larger scale projects. In fact, it says it is a natural expansion and a bit of a solution for the owners with Victory Heights’ feeding into the school for secondary years.

The school will offer mid-range fee structure in a location full of families, while offering facilities that truly tick the boxes for an all round child development. Thanks to the ready-made student body from the IAS owned nursery, The Wonder Years, and Victory Heights Primary School, South View has a good chance to start with some healthy students numbers who will enter what is looking like an impressively built school. One we will be watching...