France is banning mobile phones in schools later this year and students in one Dubai school are banned from using phones during school hours. Should other schools follow suit?
Should UAE Schools Ban Mobile Phones?
By Veathika 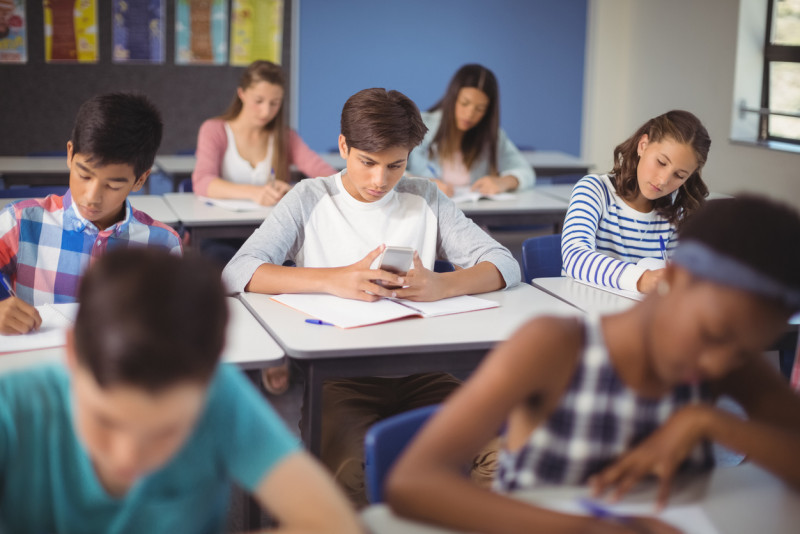 France recently announced that it's banning mobile phones in schools. Pupils will have to hand in their phones when they arrive and won’t get them back until the end of the day. Currently, they are allowed to use their phones during break times, lunch times and in between lessons but teachers say it’s damaging the students’ concentration and physical activity.

While France is banning mobile phones in schools from September 2018, here in the UAE, the Dubai British School (DBS) has already banned them during school hours i.e. 8am to 3pm.

Brendon Fulton, the Principal of DBS said that there was considerable research for the banning of the phones.

“We are 100% convinced that this is the right move. Studies show that just having a mobile phone out on the desk whilst working can cause enough distraction to disrupt meaningful learning. As the school also has a BYOD (bring your own device) policy, the students have no academic need for their mobile phones. We also strongly believe that students should be interacting with their peers during break times, rather than engaged with technology,” he explained.

Although many students were initially resistant to the move to ban mobile phone use, the school has had no “lingering discontent, and parents have been very supportive of the move”.

“Student engagement has improved steadily. Some students have spoken openly about how liberating it is to not worry about social media during the school day,” Brendon added.

“It teaches kids to communicate better again! It is one thing to learn how to write and another to tell the same thing face to face.”

In a WhichSchoolAdvisor social media poll we asked 'what’s the right age for children to receive a mobile phone?' 98% parents voted for 12 years and above.

While, most primary school students don’t use a phone in school, they do have a tablet or an iPad as part of their curriculum.

British International School Abu Dhabi (BISAD) doesn’t have a particular policy on mobile phone usage. The students are allowed to bring in their phones and use them in the classroom to photograph homework or to record audio with teacher permission.

Patrick Horne, Principal at BISAD, said: “We wouldn’t expect the pupils to use their phones in the corridors. They are allowed to use them at break time. We are trying to teach them to make the right decision. All of us have mobile phones and we choose when to bring them out when we are in company.”

The school doesn’t believe in "traditional punishment" in the case of phones being misused.

“It's not as simple as banning or confiscating, although we might do that if we felt it appropriate. It's more likely we would discuss with the child why they chose to use it and what was the impact of that decision,” explained Patrick.

“Rather than having a policy, if the kids are more aware of their usage, then that’s going to be more effective. We do think that phones have a place in school but they should be used productively and wisely, not just as time fillers.”

A 14-year-old student in a Dubai school believes that having a mobile phone is a necessity, as one may need to call home or send a quick text to keep parents informed.

“My school is a bit over the top about phones, we are not allowed to use it in class or break times. I don’t think schools should ban phones, as it’s a precaution, it’s our personal device, and they should be able to trust us.”

A 12-year-old pupil in a Dubai school had his phone taken away for a day. “We were doing tests and once I finished mine, I took out the phone, forgetting to hand it in before the test.”

The student is happy with the school policy on mobile phones, though he thinks banning is not the solution.

“Mobile phones are multi-purpose as they can be used as a dictionary or a calculator, for instance. We can look up so many things. Schools shouldn’t ban them, if they threaten to take them away then all students will listen and follow the mobile phone policy.”