You might not have heard of Abu Dhabi school-girl Liza Zimmermann; but we suspect that won’t be for long.
Meet Young Film-Maker: Lisa Zimmermann
By C Hoppe 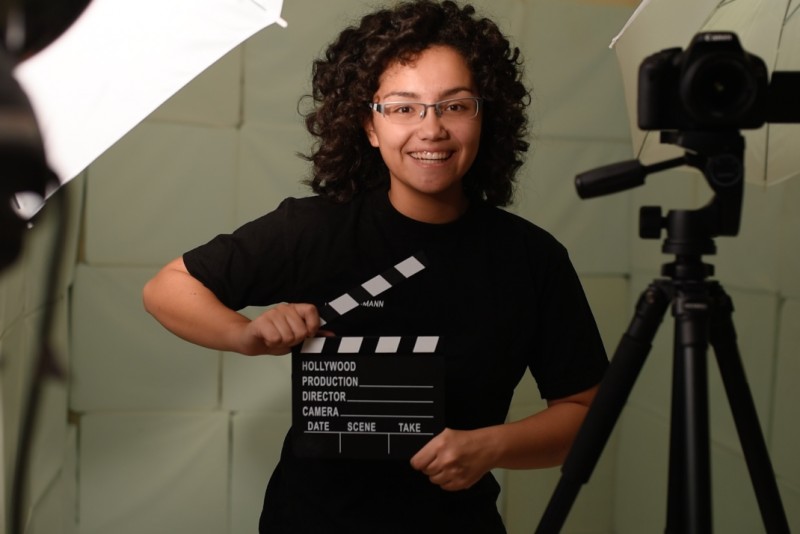 You might not have heard of Abu Dhabi school-girl Liza Zimmermann; but we suspect that won’t be for long.

Lisa, a senior at Al Raha International School Abu Dhabi, won our Young Film Makers Competition- ‘A Day in the Life’ competition, back in May.

“We saw a lot of entrants in this competition, but Lisa’s really stood out for its unique perspective,” said James Mullan founder of whichschooladvisor.com. “We were even more amazed after speaking to Lisa that she designed and executed the entire project by herself with absolutely no adult assistance.”

Although Lisa says it all began when she started making little clips around 7 or 8 years old, it wasn’t really until 7 years later that she really got going.

“I wasn’t born into it and I don’t know anyone who does this, I was actually inspired by YouTube, I found a YouTube channel that makes amazing content, parodies etc, and I was inspired by how simple it was to make something. You don’t need a lot of money... using only your phone essentially.”

“When I was around 14 or 15 years, I was further inspired by ‘behind the scenes’ glimpses of the making of real movies, I watched a lot of behind the scenes of films and was amazed at how low a budget you can actually make movies on,” she says.

Friend Athena says, “it’s been a lot of fun collaborating on projects with Lisa, and I've learned a lot about film making, script writing, and storytelling. I find it very impressive that Lisa basically taught herself the editing skills she uses in her videos. Her parents have also been super supportive, letting us build sets and film in their house.”

A Day In The Life- Through Our Eyes

Lisa says, “the WhichSchoolAdvisor.com competition asked us to create a film ‘a day in the life’ so I tried to show the school through the eyes of the people who go to the school, that’s not just students but also teachers, and the people who work there.”

“I decided to just strap a Go-pro to the top of peoples’ heads and let them continue with what they are doing, keeping it very natural.”

Clive Pierrepont, director of communications at Taaleem schools, of which Al Raha International School is part, says, “we are so pleased that the WhichSchoolAdvisor.com film competition gave Lisa an opportunity to showcase her talents and encouraged her to take on further projects at which she is excelling.”

“She has now 30+ short films under her belt and is improving her skills as an actor, writer, director and producer with every new release.”

Lisa says, “I’ve done several film projects since winning the award, I’ve created a video for a classical singing group- (the Vox Livens Vocal Group) which will be entered into a video competition this year, and I’ve also created two other short films, one of which is a music video and there other is a musical to be released next week.”

She says the award has helped draw attention to her work and encouraged others to get involved. In fact, as part of her latest project, she’ll be initiating a dance of over 80 people, while at the same time she is also finishing another short music video called "The Cuckoo's Nest", based on the book "One Flew Over the Cuckoo's Nest".

Lisa says that while she is going her IB Diploma year, the film making is her priority, and she’s already preparing for what will happen after the IB. She makes a few hours a day available for whatever project she is working on, no matter what her school workload might be.

“Do by learning and do a lot, you only really learn from your mistakes,” she says, sounding like a woman double her years.

But, she hasn’t forgotten Al Raha either, “I will continue creating little videos for school (events), especially since this is my role in the school's media team. However, I will also be giving tutorial lessons to younger grades on how to make videos and films in order to keep Raha provided with videos over the next few years.”