Hot on the heels of the release of A Level results on Tuesday, International (IGCSE) and General Certificate of Education (GCSE) results are out today for students in the UK and internationally. This is a week or two earlier than usual, in order to give A-level students more time to appeal their results ahead of university admissions.
Live updates! I/GCSE Results 2021
By Lyn Soppelsa 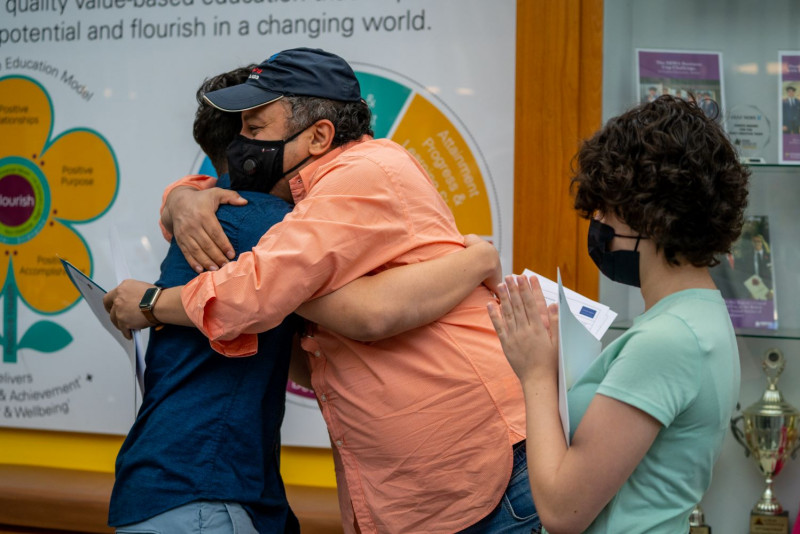 The GCSE and IGCSE is taken by students at 16 years of age with the results of the exams guiding students’ choices at A Level, or latterly, IB Diploma. They are also used as additional evidence for university and college entry as part of the application process.

The examination component of the I/GCSE was cancelled again this summer, with lockdown continuing to have an impact on learning. The UK Government’s Department of Education and its exams regulator, OFQUAL confirmed earlier this year that grades would be based on teachers’ assessments, with last year’s controversial algorithm ditched.

Results issued by the UK's Joint Council for Qualifications (JCQ) for England this morning show a significant increase in the number of students achieving the top grades of 7/A and above – nearly a third (28.9%) compared to only a fifth (20.8%) in 2019, when exams were last held.

What follows are the live updates for UAE schools as their students receive their 2021 results.  The grading structure for GCSE exams is from 9 (the highest) to 1, whilst for IGCSE, it is from A* (the equivalent of a Grade 8) to G. A Grade 4 or C is considered a pass.

The highest achievers were Thant Sin Linn Myint with 11 A*s, Amy Olivia Downes with 9 A*s and 1x A, Adaa Salwan and Lewis James Paige who both achieved 9 A*s and 2 As, Karma Mahmoud Fouda who received 7 A*s and Susan Thomas who was awarded 8 A*s and 2 As.

GEMS FirstPoint School also had a cohort of three students who were entered for the Level 3 BTEC qualification and achieved two passes at Merit and one at Pass.


The second school to share its results was Dubai British School Emirates Hills where a cohort of 72 students were entered for their I/GCSE exams. 38% of entries were awarded A*, 58% achieved A*-A, 78% A*-B and 98% A*-C with a 100% pass rate for the cohort.

This was also the first year that Dubai British School Emirates Hills also had a graduating Year 11 class whose students had also entered for BTEC examinations. The majority of students achieved the highest possible BTEC award of Distinction*. These students will now enter Year 12 A-level and BTEC courses.

DBSJP is particularly proud of the fact that all students of all abilities were entered for the exams, a testament to the school's commitment to inclusion, of which it has been a leading proponent.

39% of Repton School Dubai students achieved the 9-8 grade (A*) and 58% secured the 9-7 grade (A*-A). As an inclusive school, Repton Dubai is particularly proud that all students of determination achieved 5 or more IGCSE’s at grade 9-4 (A* - C) including English and Mathematics.

Dubai English Speaking College has one of the largest GCSE cohorts with 227 students entered for exams. The students did very well indeed with 14% of exams awarded a Grade 9, 53% Grades 9-7, 75% Grades 9-6 and 99% of entries awarded Grades 9-4.  The overall student pass rate was 99%.  The highest achievers were awarded 9 passes at Grade 9.

Dubai College, where entry is selective, again produced a raft of highly-graded results. The cohort of 123 Year 11 students entered for the IGCSE/GCSE qualification achieved over 63% of entries at Grade 9, 84% at Grades 9-8, over 95% of Grades at 9-7 and a full set of entries at Grades 9-5, a 100% pass rate.

In addition, the entire cohort of Year 10 students sat their English Language IGCSE one year early, with 138 students (96.50%) gaining a grade 9 or 8. These figures represent slight increases on those achieved by the 2020 cohort. A full set of grade 9s was achieved by 27 students (up from 22 last year) with an additional 36 Year 11s achieving a full set of grades 8 and 9.

GEMS National School Al Barsha had a cohort of 42 students who were entered for 313 exams. 4.2% of results were awarded at Grade 9, 12.5% at Grade 9-8, just over a quarter (26.8%) achieved Grades 9-7, whilst 69% of entries were awarded Grades 9-5 and 87.2% Grades 9-4. Nine students achieved one or more Grade 9s, whilst 18 achieved Grades 9 to 8. Outstanding students were named as Maryam Al Jarman, Hasan Ali Ayesha, Hajara Sanda, Kinan Fayez Al Maarawi, Mohammad Alqubaisi, and Omar Shabban.

Aldar Academies provided a summary of the performance of the four schools where students were entered for I/GCSE exams. The results account for students at Al Mamoura Academy, Al Ain Academy, Al Bateen Academy and Al Yasmina Academy.

Over 40% of grades at Al Ain Academy were awarded a Grade 9. One third of students at Al Mamoura Academy received a grade of 8 or above and over half of its students achieved more than five GCSEs at grade 7 or higher.

At Al Yasmina Academy,  nearly 40% of entries were at Grade 8 and above, with an overall pass rate of 95%. In addition, Al Yasmina Academy had over half of its students achieve more than five GCSEs at Grade 7 of higher. Al Bateen Academy had 50% of entries awarded Grade 7 or higher, with an overall pass rate above 90%, along with 10% of the students achieving at least five GCSEs at Grade 9, including English and Mathematics.

The highest number of grades achieved by an individual student was 8 A*s, 1 Grade 8  and one Distinction.

In addition, the cohort of Business students who were entered for their BTEC qualification achieved 25% of awards at Distinction and 63% at Merit.

Meanwhile, at Deira International School a cohort of 108 student achieved a remarkable 77% of awards at A*-A, whilst 51% of grades were awarded at A*. 89% of results were awarded A*-B and 97% achieved A*-C.  There was a 100% pass rate for the cohort.  Stand out students included Daniel Nasri, Marcelle Shouly, Meera Hallak, Muhammad Nadeem, Murtaza Asghar, Nabil El Hage Ali, Nayla Waly, Pradyumna Saligram, Roxanne Dubash and Vaynika Gupta, all of whom achieved A* in all subject for which they were entered.

Results in STEM subjects were particularly impressive, with 87.3% of grades across all three Sciences awarded at Grades 9-7, whilst in Mathematics 80.2% achieved these grades.  Arts subjects also achieved high grades, with Art (71%), Drama (78%) and Design Technology (64%) awarded at Grades 9-8 this year.

Outstanding students this year were Myra Shahbazi, Grace Clarke and Ala’a Alazizi, who each achieved nine Grade 9s, whilst Abdelrahman Sadawey achieved eight Grade 9s and two Grade 8s, including Business Studies which he took in his spare time.

In Dubai, the newest Brighton College branch received results for its first ever cohort of GCSE students. The entire cohort achieved Grade 9 to 8 in Chemistry, Physics, Biology and Physical Education and 100% Grade 9s achieved in Art.

Brighton College is one of several schools who monitor and publish their 'value added' results which is a comparison of the actual grades achieved against predicted grades arrived at through benchmark tests taken by students on entry to the college.  With a positive score of 1.92, this means that students achieved, on average, nearly two grades above the predicted grades.

Hartland International School celebrated the results of its first cohort of GCSE students this year. There were 29 students in the cohort and a total of 237 grades were awarded.

Five students achieved perfect scores of 9 across the board.

At Nord Anglia International School Dubai, 48% of students achieved an A* or 8/9 and 97% 5 or above with a 100% pass rate. The school also revealed that 96 % of students have achieved at or above their CAT indicator, a value added test.

There was a small but successful cohort of students at Star International School, Al Twar with 45% of entries achieving Grade 9-8 (A*) and a 100% pass rate.

At British School Al Khubairat, this year's GCSE's students kept up the tradition of delivering to the school some of the best results in the capital. 25% of Grades were Grade 9, 43% Grades 8-9, 66% Grades 9-7 and 98% Grades 9-4, which means just 2% of exams taken resulted in a fail grade.

Table of results, Order by %Grade 9-8

What is the difference between IGCSE and GCSE?

Whilst IGCSE exams – as the name suggests – have a more international focus in terms of content (where relevant), GCSEs are the courses followed by students in the UK. UAE schools tend to offer IGCSE in the main, or with a limited number of GCSE, although schools that have more traditional ties with the UK generally offer more in the way of GCSEs.

How have exam results been awarded?

Teachers will base their assessments on a range of evidence, including coursework and mock exams.