RGS: What Guildford Has Learned from Dubai

Just over a year since its opening, Whichschooladvisor.com caught up with Dr Jon Cox, Head Master of RGS Guildford UK, during his September 2022 visit to the school, and Mrs Clare Turnbull, Principal of RGS Guildford Dubai, to hear their reflections on the school's first year, and find out what's in store for the year ahead.
RGS: What Guildford Has Learned from Dubai
By Susan Roberts 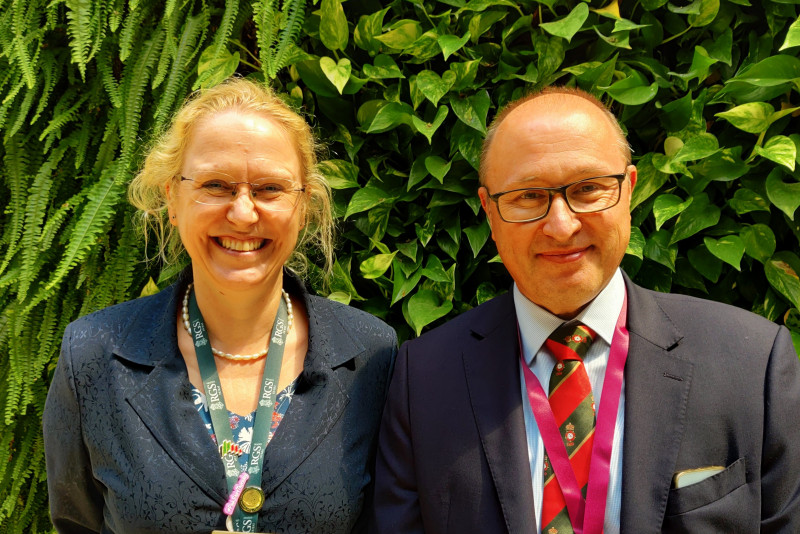 Just over a year since its opening, Royal Grammar School Guildford Dubai has quickly become a respected and highly praised choice among the many British schools on offer in Dubai. Whichschooladvisor.com caught up with Dr Jon Cox, Head Master of RGS Guildford UK during his September 2022 visit to the school, and Mrs Clare Turnbull, Principal of RGS Guildford Dubai, to hear their reflections on the school's first year, and find out what's in store for the year ahead.

After being open a year, how has RGS Guildford Dubai changed and developed?

Dr Jon Cox: I last came to the school when it opened, which really went well, but the difference now is extraordinary, it’s palpable. After just a year, we have a real feeling of community from our young people, you can feel that they're really proud to be here. I was shown around today by the four school captains, which was a wonderful experience.

At RGS Guildford UK, we are so proud of what Clare [Turnbull] has done in terms of building the school’s reputation here. It's all about the young people that we are educating, and they seem genuinely pleased to be here, and parents too seem delighted that their young people are having that opportunity.

Clare Turnbull: We actually asked our children and their families who were here last year what they feel has changed from when we opened, and they told us that they don't feel that it’s different, just that’s it’s bigger. I was really pleased to hear this, as we would not want to lose that special character that the school has had.

I think one of the reasons for this is that so many of our new children have been referred by families who were with us last year. The community has grown from the families who were our amazing founders, they have felt that we have really delivered, and have shared their experience of the school with their friends. So, our school does feel different, in that it has really developed into a community, and yet it also feels the same.

What do you think has led to the success of the school over the past year?

Dr Jon Cox: There has been a real focus on instilling our values. I feel we are always 'banging on about this', but it's so important, what we expect of our children, above all else, is kindness. If you get that right, then the community is a positive one. People feel that they can be themselves, they don't feel they have to conform. They can enjoy their education, without fear of the judgement. That’s really important.

Clare has lived and breathed those values for years and years. We've worked so closely together back in RGS Guildford UK, that it's just easy for her to transmit those values here in Dubai. If you've got a really good ethos like that, then people will naturally pick up on it, and want to be a part of it.

Communication has also been something that has been appreciated. Some parents have said that there is so much communication, but I say fantastic: I would be worried if you were saying there's not enough, I don't know what's going on, I don't know what my children are experiencing. They get a picture of their child’s day, of what's gone well, and what's not gone so well. They’re involved and they’re informed at every step.

Clare Turnbull: I think perhaps it comes down to the real transparency and openness we have with parents about who we are, and who we're trying to be here. We are not trying to be 'Little Guildford', we aim to be contextually appropriate, to celebrate and love the fact that we've got 54 nationalities in the school. We have unashamedly high aspirations for every child, and the only way we are able to deliver on that is by having quality teachers who get to know every child as an individual and take them on their journey.

In what areas does the school need to develop?

Dr Jon Cox: Collaboration! It's never been a one-way street; it's not RGS coming to Dubai, directing on how we do it in Guildford, that's not the right way to start. It's a two-way learning process. We’re on a journey with the whole school community, not just between management, not just between Heads, it's between individual teachers, and going forward, it will be between pupils as well.

Clare Turnbull: The second area here is really developing our parent body. Of course, we couldn't invite our parents into school until February of last year, due to pandemic restrictions. We have really made the most of it since then and our 'Friends of RGS' is something that is taking off this year.

What will be taken back to RGS Guildford UK that has worked well here in Dubai?

I had a great conversation with one of our youngsters about this recently. This young girl told me, 'Miss, I've worked out the difference between being a leader and being the boss'. I said ‘Oh, great, talk me through that one’, and she said, 'a boss tells you what to do, and a leader shows you what to do.' I thought that was brilliant!

Are there plans for adding another school to the group internationally?

Dr Jon Cox: We are looking at possible opportunities internationally, but the thing is, we have to be extremely particular about who we partner with, as we have to be involved in our schools. We take the approach that for an RGS school, you have our values, you have our ethos, you have the whole lot, or you have nothing at all. If it's not exactly right, we won't do it, we've got very clear criteria.

Visiting our international schools is such a pleasure, though. I come here to Dubai and I see these young faces and I can't help but think, wow, schools are transformational experiences, these individual characters are all formed in school.