WhichSchoolAdvisor.com meets Mr John Bell, Founding Principal of Bloom World Academy, a new Dubai school set to open in September. We find out what lies at the heart of the vision of the school, and why its opening could be big news for your family.
Interview: The Bloom World Academy Difference
By Susan Roberts 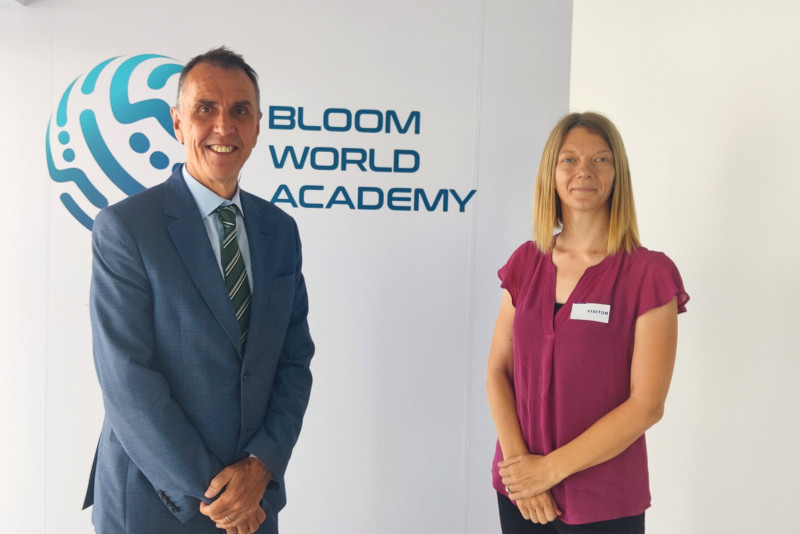 Bloom Education, the organisation responsible for bringing the Brighton College brand to the UAE, has put its own name on its latest project, Bloom World Academy, a new school which will open at the beginning of the 2022-23 academic year. The IB school has already sparked conversations around Dubai as it dares to do things a little differently, most notably with its move to start just a little bit later, at 9:00am...

Of course, there is much more to a school that its schedule, and while this particular announcement has caused some waves, we were eager to understand the proposition at the heart of Bloom World Academy. To help us, we met with Mr John Bell, the Founding Principal of the school, to learn more.

Mr Bell is an exceptionally experienced education leader. In recent years, he has worked as Director of Learning and Standards within a major UAE education group, and in a senior leadership role in an international school group. The new Bloom Academy Head has also worked for a regional education authority in the UK. It would be fair to say that it has been quite some time since Mr Bell held the title of School Principal however, and we were curious to understand why he had been eager to step 'back', or perhaps forward to the front lines, for this role now.

The reasons for the decision become evident as you talk to Mr Bell about his vision. He says he has been provided with a rare freedom to use his international experience to design a school that doesn’t fit the usual mould; a dream come true for many education leaders. The enthusiasm he feels for this project, and for his role within it, remain very apparent throughout our conversation. Despite the impressive titles Mr Bell has held, we found him to be a surprisingly down to earth, good-humoured figure, with the warmth and humility needed to relate to children and families day to day.

With the hype around Bloom World Academy and its mantra of daring to do things differently, we were surprised by Mr Bell when he told us that there was no one thing that the school was doing that was, in fact, unique:

“The word unique has been mentioned a lot. I keep saying to people that what we’re doing at Bloom World Academy is not unique, what's different about what we're offering is we're joining up the dots between lots of different things that schools around the world offer. The uniqueness is bringing all of this together.”

This will perhaps be comforting to hear for some parents, who may feel a little trepidation about enrolling their child in a school that chooses to step away from tried and tested practices. While Bloom World Academy’s message is one of progressive education in many respects, Mr Bell makes it clear that it is not pioneering in any of its approaches, but rather the school will bring together proven practices that have been shown to work elsewhere.

It struck us, however, that while this school may not be planning to do something for-the-first-time as such, it certainly will be a school that has been considered and created at a particular time, an almost 'post-pandemic' school or a school responding to the needs and wants of families now. Priority is being placed on all things 'human' and non-standard, a move very much in tune with current parent requests.

Community and connection appear to be at the heart of what Mr Bell is aiming for: face to face interactions; warmth and humour; recognising and celebrating individual strengths and support needs of students; individual attention; working around non-standard family routines and schedules; providing a remote work space for parents (and in fact, encouraging parents to spend time in the school).

“As a school, we aim to have what I call ‘traditional values’. What I mean by this is really quite a simple premise of etiquette, politeness, community and good humour. This can be in modelling behaviour, if I’m at the door first, I'll open it for a child, and if the child gets there first, they open the door for me. We set clear expectations, setting the tone that we all respect each other, we all look out for each other.  We do not just walk past one another, we see one another, we say good morning, we build a rapport. And I'm really serious about humour being an important part. Above all else, it causes people to smile at each other.” - John Bell, Founding Principal, Bloom World Academy

Mr Bell was also clear in that a key element of the school is that it will be “family first”. This, he told us, was the key motivator in starting the school day at 9:00am, allowing for the morning family time that is often lost to an earlier school start. He recognises also though, that each family will have their own unique needs and schedules, and as such, Bloom World Academy’s standard school day of 9:00am – 4:00pm will have optional wrap around hours of 7:00am – 7:00pm for families who need this. These hours are exceptionally flexible, by UAE or international standards. The additional hours, Mr Bell explained, will be filled with extra-curricular activities such as sports, arts and homework clubs.

Working closely with parents, and ensuring their voices are heard and that each child is viewed and understood as an individual, is also a key element of the school’s vision. Mr Bells explained that monthly meetings with parents to discuss their child’s needs, progress and targets will be standard practice. He used an interesting analogy in explaining the school’s reason for introducing this:

“Many families are coming to us from other schools for a simple reason: they are not feeling heard. It has always struck me that there are other education models, for example special needs schools, that really give children a lot of the right attention, personalized attention, but as soon as you go into mainstream education, this stops. We need to change that."

"Every child should have personalised attention, which sounds idealistic, but it is entirely practical as well. We build the learning journey around the child, we make communication a priority with monthly parent meetings, whether it's online or in person. We set targets to keep children on track for age related expectations, and we stretch targets. We assess if children are performing above expectations, or if a child is struggling, we do things differently. At Bloom World Academy, this level of communication and planning will be for every child.”

Mr Bell was quick to add that while parent communication will be key, the child will remain at the centre of everything. Children, he said, are "the captain of the team", parents and teachers are "the team around the child". He went on to explain that a key part of the school's vision will be empowering children, ensuring they have choices and are given the tools and confidence to be independent:

"My ambition here is to see the five-year-olds walking hand in hand down the corridor, trying to find the science labs together. It’s the idea of independence, that the school is a classroom and learning can happen anywhere, and it's their school... there's no secret part of the school they can't go to."

While Mr Bell’s vision is undoubtedly inspiring, we should understand the reason tailored, individualised learning is not everywhere is largely due to it being more expensive to deliver. How, then, will Bloom World Academy, manage to achieve these admirable goals, and keep fees reasonable? Recruiting right, and the mindset of its appointed teachers appears to be the answer:

“Being a teacher at Bloom World Academy requires a combination of being highly methodical and good humoured. As we have recruited, we have found teachers who have listened to our vision and said, “Thank goodness! What a breath of fresh air, this is what I want to do." This is important, our teachers must be passionate about what we are doing.

He went on to say:

“The response we’ve had to the school’s recruitment drive is incredible and shows just how far Bloom World Academy’s message has spread. It also shows how teachers around the world want to be a part of our new way of thinking. We’ve had every type of teacher from every continent apply to become a part of our movement and the interest we’ve seen shows the need for a school to break the mould and harness a progressive way of thinking to do things differently in education.”

“The senior leadership team are not only highly experienced educators, but they possess a unique drive to change the face of education by creating a school environment that really does put its students first.”

Mr Bell went on to explain that professional development will be a priority at Bloom World Academy, with facilities being put in place for the purpose of teacher learning and development. This will likely have been a very attractive proposition to the many educators who have applied to join the founding team.

The physical school itself is not a fresh new build (although certainly couldn't be considered old, having been completed in 2018), it is currently in use as Dwight School Dubai. This will be vacated at the end of the current academic year, allowing for a summer of alterations and rebranding before Bloom World Academy welcomes its founding families in to begin their new journey.

Current facilities are already impressive, with world class sports facilities, including a running track, two swimming pools, tennis courts, padel tennis courts and an indoor football/rugby pitch, as well as performing arts facilities, music rooms and spacious classrooms. With the intended alterations to bring the building more in line with the vision for Bloom World Academy, this is likely to be an impressive school indeed.

The alterations include transforming the current atrium into a Student Forum, designed to have students come together, facing one another, to discuss the 'business of the day' each morning; the current waiting area will become a remote work space and "trendy" parent café (as jovially titled by Mr Bell); the drama room will be converted into a fully equipped black box theatre and a currently un-utilised outdoor space will be converted into a "town centre" where students can congregate in the cooler months.

WhichSchoolAdvisor.com is very much looking to watching these plans begin to flower and deliver. There is no doubt there is a huge amount that will be very appealing for Dubai families, but pulling it together, as Mr Bell puts it, will require "expert planning and coordination behind the scenes". Could he be the man to do this? We at WhichSchoolAvisor.com think so: Mr Bell has all the skills, experience, and passion to bring the vision to life and we're looking forward to our first official visit post September to see all the ideas, in action.