Our first Inspiring Woman in Education of 2023 is Diana Zeidan, Area Director of Odyssey Nurseries Dubai. From working in children's television to leading a team of 150 early childhood educators, Diana's career has been anything but usual. We learn more about her journey, what fuels her passion and how she supports her team...
Inspiring Women in Education, Diana Zeidan
By Susan Roberts 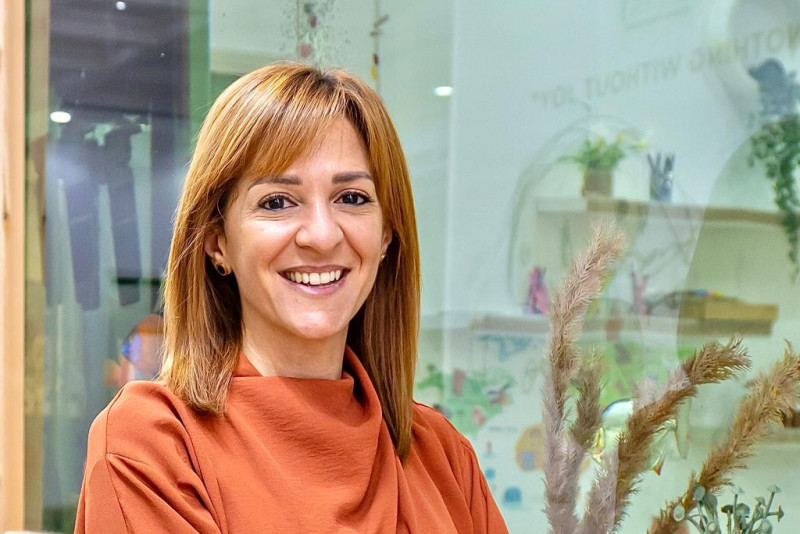 At WhichSchoolAdvisor.com, we actively seek out those in the education sector driving positive change which is why, in this Inspiring Women In Education interview, we speak to Diana Zeidan, Area Director of Odyssey Nurseries Dubai.

A remarkably humble leader, it is difficult to imagine Ms Zeidan seeking the limelight in her younger years as an MTV children's television presenter. While having found success in multiple fields, there is a clear thread throughout her projects; a love of working with children.  We learn more about her journey, what fuels her passion and how she supports her team...

What inspired you to work in early childhood education?

My first professional experiences working with children were not so typical. I was 18 years old, still at school myself, and I had a passion for theatre and drama. I got an opportunity to work behind the scenes on a children’s television show on MTV Lebanon. I was one of the performers wearing the big mascot costumes, acting as different characters to warm up the audience. I used to skip some days from school to do this because I loved it so much. As the team at MTV got to know me, I was offered more opportunities. I moved on to creating plays for children with them, and before long, I was presenting my own episodes of a children’s television show.

I was twenty years old when I started presenting and I was having a great time. What stands out in my memory from that time is the total joy inside me when I put a smile on children’s faces while doing silly things, just clowning around with them. I just loved that feeling. As I started to become more well-known from the TV show, I would be recognised by children while I was out at the mall or walking outside. I found I felt an affiliation with them more and more.

And then I got married and came to Dubai in 2004. I still had the passion for working in children’s entertainment, but my life was changing, and my priorities were shifting. I was planning to have children myself and knew I’d need to move into a more practical career.

I thought about what I had loved most about my television work, the connection I had felt with children, the fun and joy I’d been able to provide. With that realisation, I decided to aim for a career in education.

Tell us about the career journey that followed…

Dubai was a very different place back then, and my bachelor’s degree in Geology was viewed as sufficient for me to work as a teacher in a school. I applied for a position as a science teacher, but almost immediately the School Director noticed my suitability for working with young children, he could feel my enthusiasm when I talked about children in the early years.

In my first year as a KG teacher, I was lucky to work with some wonderful people, including an exceptional teaching assistant, Ms Abir, who guided me and inspired me. I enjoyed this role so much that I returned to studying and completed a French early years diploma, then moving on to complete UK qualifications in early years education.

Nurseries were not on my radar until I became a parent myself. When I had my daughter in 2006, I started searching for a nursery, and what I found available did not match the sort of environment I was looking for. I told my husband that I wouldn’t be sending our daughter to any of these places, that I’d have to open my own nursery instead. I found a business partner to work with, and we opened our own nursery in 2008. We did a huge amount of research, I travelled to France to experience nurseries there (as the nursery was to use, primarily, French), I explored the Canadian system too. Probably my biggest influence however was my gut as a parent, creating the place that I had hoped to find for my own child.

Within only a few months of opening, the 2009 financial crisis hit. I’d put everything I had into this nursery, and its future suddenly seemed hopeless...

Friends and family encouraged me to keep going, so I decided to give it time. We started the nursery with three children: my daughter, my partner's son, and the child of a friend. Month by month, the nursery started growing, just through word of mouth, through close friends. From that small ring of friends, we grew to 120 children by the end of that year, in the toughest economic conditions we could have imagined.

We opened a second branch of the nursery, it was such a wonderful success. We had so much to feel proud of. Unfortunately, after eight years operating, I had a clash with my partner over a health and safety concern. We couldn't move past it, we couldn’t align our thinking on this. I started to feel that it just wasn’t me anymore, it did not reflect the philosophy I had created it with.

I decided it was time for me to leave, and I did. Unfortunately, after just one year of my exit, both of the nurseries closed down. While it was disappointing to move on from the nurseries I had created, my passion for early years did not waver. I started my Master’s degree in Education Leadership, and developed my understanding and knowledge in this field.

I intended to take a break, to study and reconsider my next career move, but before long I was approached by Kids First Group CEO, Kamil Najjar, about a new trilingual nursery project in Dubai, Odyssey Nursery. I intended to have a short-term involvement, just one year, but of course, I became fully engaged. Fast forward seven years and I am Area Director of six Odyssey Nurseries, with 150 members of staff working with me. I am enormously proud of what we have achieved.

How do you support and inspire such a big team?

I work with women, who as well as being early childhood educators, are mums, wives, sisters, daughters. They have to juggle a lot and they need my understanding. I always push for their best. I never lead by boasting or criticising or complaining; I try to take the positive side. We all make mistakes, we all have bad days, bad moments, and I see this, so I aim to focus on the positives.

My team, of course, particularly my amazing leadership team. They support me and they give me this incredible motivation and encouragement. They’ll call me and they say, we know you're so busy, but we just want to hear your voice today, just to say "hi!".

I feel like I’ve created a family, not just a team.

How do you keep your passion for what you do alive?

My passion started when I was 18, when I started seeing how I could make children smile. That passion has never gone. To this day, every morning, I still come in at 7:30am to greet the children, and feel the love and energy in their bright eyes and faces.

This is what fuels my passion every day: seeing their happy faces, seeing  their beautiful smiles...