Sunmarke School has launched the Infinity Games, a UAE-wide sports event dedicated empower students of determination within the field of sport.
SEND Students Ready for Infinity Games
By Veathika 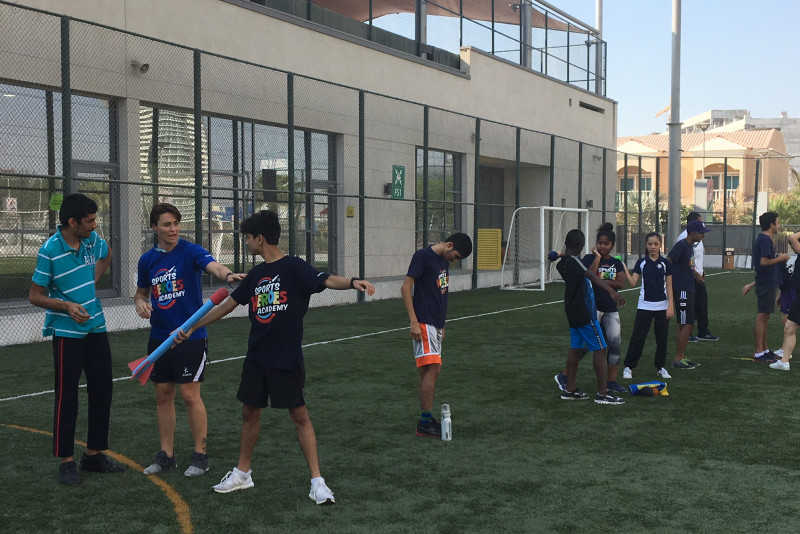 There’s a lot of talk about inclusion in schools and classrooms across the UAE, but less so perhaps in sport.

The national agenda is geared towards inclusion in a big way. It is s a key area that Dubai's education regulator, the KHDA, focuses on within schools as well.

Gold medal for Sunmarke School then, which has just launched the Infinity Games - the first inter-school sports event within the region to focus on inclusion.

The Infinity Games has been designed to create a "transformative platform of equality so athletes of all sporting abilities have the chance to develop their skills and shine".

The Games will be held on Friday, November 2, from 9:30am -1:30pm, at Sunmarke School, Jumeirah Village Triangle.

The event is the brainchild of Ms. Hollie Murphy, Founder of The Sports Heroes Academy, a sports initiative helping students of determination reach their full potential with the help of student volunteers.

“After training these kids for some time now we realised there was no place for the children to showcase their talents. There was no competition where they could compete or see how good they were. We wanted to take them to the next level and make them feel like athletes. This is why we built the Infinity Games, to facilitate their progression.”

Ruba Bitar, mother of a mild Autism Syndrome child, Mahmoud Bitar, is not only grateful for the opportunity for her son to compete but has also seen a huge change in the child through his participation in sport.  Mrs. Bitar said:

“When Ms. Murphy started the project, we believed it would help children like Mahmoud in a number of aspects – building their self-esteem, to build awareness in the entire school as it involves everyone; it also creates peer interaction and communication. Plus children and staff members surrounding and supporting those with SEN become better able to deal with disabled children.”

The results, she added, have been fantastic, with Mahmoud becoming self-motivated and his athletic skills improving vastly.

The programme has seen an overall awareness in the school and the community as well.

"The biggest thing that you notice around the school is the shared value of inclusion and that inclusion is about equal opportunities, which has given the children of determination an opportunity to play sports just like all other students in the school. The relationships that you see with the athletes and their buddies are just phenomenal. They are so caring and so eager to learn and they are so dedicated to it as well.

The buddies used in the Sports Heroes programme will also be volunteers at the Infinity Games as they are trained to coach and deal with students of determination.

Most of these volunteers are students themselves, giving an hour every week trough the school year to train their buddy.

Arushi Katti and Imara Mwadzaya, both 15 years old, Year 11 students at Sunmarke joined this project as they had a passion for it. Both faced challenges initially but say the experience has resulted in self improvement. Arushi said:

“My buddy was not able to focus or listen to me very well as he was quite hyper but I was able to overcome that challenge once we formed a bond. At that point he was able to understand that if he listened to me then he could do better. This experience has made me a lot more patient. I accept I need to repeat things  until he understands. It has helped me to become a better person. I have realized I have so much that they don’t have.”

"My biggest challenge was to getting to know my buddy as in the beginning he was closed off, but then we formed a connection... The challenge for me was to make him understand what he had to do at each exercise station. Being part of the Sports Heroes has made me develop a lot more empathy. That I think has made me a better, more patient and understanding person.”

If you want to attend, you may register to do so here. Entrance to the event is free for all...