IB Diploma Results have been officially released in the UAE. After more than two years of hard work by students, teachers and parents alike - WhichSchoolAdvisor.com experiences their joy.
IB Diploma Results In The UAE - Roundup
By Veathika 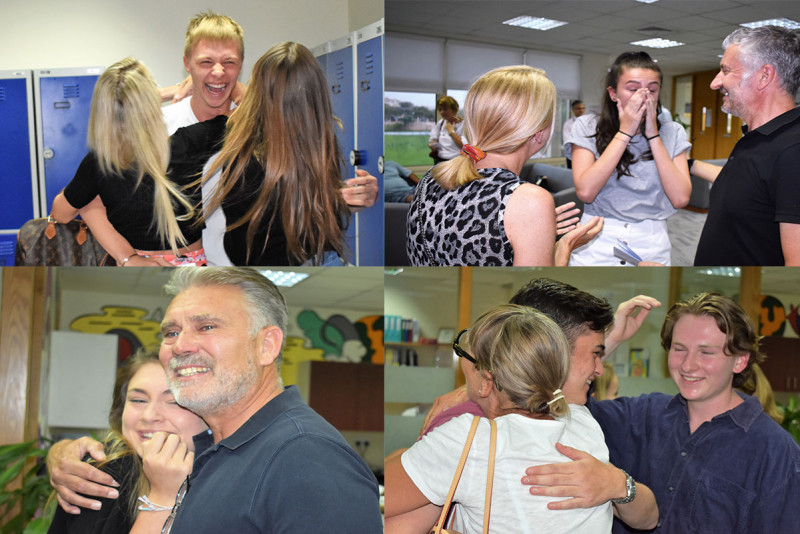 The International Baccalaureate (IB) Diploma results are out. Some schools in the UAE released the results immediately on July 5th, some have sent them out today, while others will be releasing them over the next few days. Data for the schools that have provided information to us, may be found in the chart below.

What is already clear is that this is a good year for IB results in the UAE.

The 50th year of the IB is not a bad one for the International Baccalaureate programme itself.  Today there are over 1.7 million learners worldwide, 1,971 of whom finished the IB DP and CP programmes in the UAE this May. The global school average for 2017/18 is 29.78 points, down very marginally from 29.9 last year. The UAE IB average is higher by 1.63 points, at 31.41 according to a release sent by the IB organisation. To get a sense of scale, each point at IB is worth approximately 2.2% on a scale of 100. The IB maximum score is 45.

Of the schools that have published so far, Jumeirah English Speaking School Dubai has the highest average so far, set at 35.8 points. Some 62% of its students scored above 35 points and the school received a pass rate 99.09%.

There were many university placement highlights at JESS.

Set to study in the UK, Zahra Hannigan is heading to St. Catherine's College, Oxford to study Law. Her colleague, Vivian Sinclair will be heading to University College London to study Medicine while Deena Abdel-Hafiz will be studying Psychology at St. Andrews University. All three scored 42 points.

On their way to the US, Lamiya Gulamhusein gained her place at UC Berkeley, Mustafa Gulzar will be studying at Claremont McKenna College and Lewis Burras has a place at University of Virginia on a swimming scholarship.

“Each year, I see our students strive to meet their aspirational goals, stretch themselves well beyond their comfort zones, stumble, pick themselves up and then go on to attain exceptional results worthy of their individual efforts. Their investment is significant and I am always left proud of their achievements at this, the end of their high school journey.

“JBS students have again excelled in the IB diploma and CP courses this year with a fantastic set of results.  The schools average is 32 points and we are proud of Omar Al Bastaki who achieved 41 points.  Omar will do his UAE national service before making his application to University.”

Taaleem's Raha International School, Abu Dhabi, also secured an average above the global one, at 32.1 points. This was just a shade down on the previous year's result.

Some 86 students took the IB programme in 2017/18, with 77 passing the Diploma. The highest points' award was 44, up from 43 last year. Aymon Jilani is heading to Stamford.

Taaleem's Uptown School average points score was 33, the highest in the Taaleem group. All but one of its students passed the Diploma, and one student scored 42 out of the maximum 45 points. Chris Bromham, Principal of Uptown School, spoke for the school, saying:

“We are absolutely delighted to set a new high benchmark for the school. An average point score of 33 is a tremendous result for a genuinely inclusive school. This reflects the hard work and dedication of our students and staff.”

A spokesperson from Taaleem told WhichSchoolAdvisor.com that the school group had had its best ever year at the IB...

“We are extremely proud. Our students from our four schools, Uptown School, Jumeirah Baccalaureate School, Greenfield Community School in Dubai and Raha International School in Abu Dhabi are now looking forward to continuing their education careers in leading universities and colleges throughout the world.”

Unsurprisingly perhaps for such a big group, GEMS has not released the results for all of its schools, while of those schools that have published information, key details are still to be forthcoming. We do know however that the six schools noted above had an average pass rate of 92 per cent.

“We are immensely proud of this year’s cohort of GEMS IB Diploma students and their results. The IB Diploma programme is very rigorous and our students’ hard work has paid off. While we are always sad to say goodbye to our graduates, we are very happy to know that many are attending their first-choice university next year, and I am confident that they are all well-prepared to make a positive difference in the world thanks to their education.”

Repton School Dubai also scored an average of 34 points, just shy of its 35 point average in 2016/17 (after remarking).

Of those following the IBDP programme, 98% were awarded the IB Diploma.

Repton was also keen to point out that 100% of its Emirati pupils successfully earned either their IB Diploma or IBCP certificate.

Repton's top student gained 42 points and is set for UC Berkeley in California. A second student, with 41 points, is heading for Oxford.

“This 34 points average score is one of the highest on record at Repton. These excellent results ensured that all our students achieved the results required for admission into their university of choice, with a high percentage entering the prestigious Russel Group of Universities in the UK or Ivy League in the US.”

The first school in the UAE to offer all the IB programmes - from Primary to the Diploma, Dubai International Academy recorded an average of 34 points overall. Almost 1 in 5 (18%) students achieved a score of 38 points or more, and over three quarters scored more than 30 points.

The highest score of 45* points was achieved by Paulomi Sengupta, who will be joining the University of Nottingham UK to study Medicine. Paulomi said:

“The IB was a truly transformative experience and I’m thrilled and excited with the results. I can’t thank my teachers enough for all their support and for shaping me as a person as well as a student..."

The British International School Abu Dhabi has achieved a 100% Diploma pass rate which is not only above the world average of 79% but is the highest in the school’s history.

14 of the 22 full diploma students got 30 points or higher, with students securing offers from some of the top universities in the world including Edinburgh University and University College London. Brian Irving, Head of Secondary, said:

The individual challenges faced and ultimately conquered by our young people is testament to their determination, stamina and resilience all of which will stand them in good stead for their forthcoming university studies. We look forward with anticipation to the students' undoubted university success.”

At Raffles World Academy, the Diploma Programme students have an average score of 32 points, with one in four students attaining more than 45 points.

The Emirati Diploma Programme students at the school recorded an average total of 35 points, with the top student, Alia Khoori scoring 38 points.  Alia is on her way to Kings' College, London, to study Economics.

Most students at Raffles are set to study at Russell Group universities in the UK. Other destinations include St George’s University, Grenada, Boston Massachusetts College of Pharmacy and Health Science, and Ryerson University in Canada..

Dar Al Marefa School, which educates predominantly UAE Nationals, also announced its IB DP results for the first time. A small cohort of just three students completed the programme.  Results were excellent, with two of the three candidates achieving 35 or more points (the highest scored 36) and the third achieving 34 points to give an overall average of 35 points. Obviously, with such a small and clearly highly selective cohort, the school had clearly prepared its students for success.  It will be interesting to see whether additional numbers of students complete the Diploma programme in 2019.

* Proving that asking for remarking is very much worth with it, Paulomi was originally awarded a 44, which was revised up to 45 after she, successfully, sought a remark.