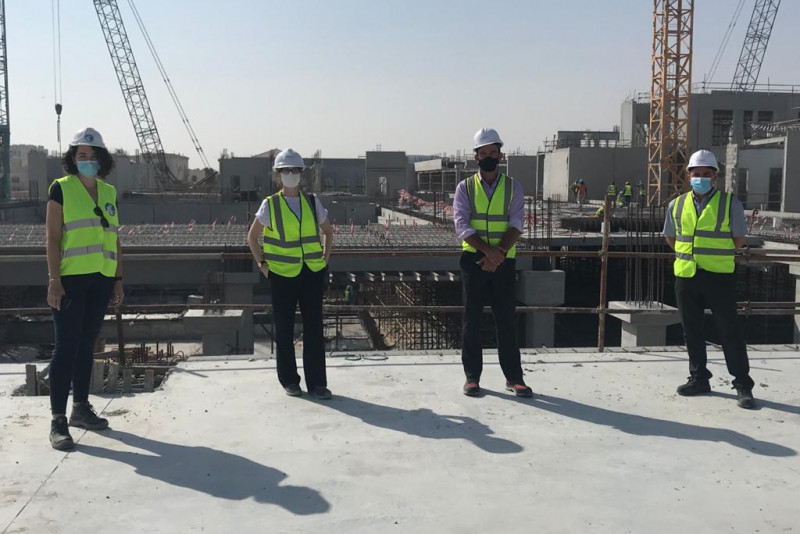 ADEK rated ‘outstanding’ Raha International School has expanded into a second campus, just a three-minute drive from the original school in Raha Gardens. The Khalifa City branch is already partially open, with 280 students (from Early Years to Grade 3) happily using the top notch new facilities, and have been doing so since September 2020. The remainder (of what will be an all-though school) is still under construction, so we donned our hard hats, high visibility vests and steel cap boots for a WSA Hard Hat Tour...

We are welcomed to the school by Iain Colledge, Executive Principal, Amii Popple, Marketing and Communications Executive and Marthinus Neethling, Head of Operations. Upon entering the construction area, we are given a thorough Health and Safety Briefing by site Health and Safety Officer, Mr Ali Kumar. With safety at the forefront of our minds, we set off to see what Raha International School, Khalifa City has to offer.

Our tour began by crossing what is currently a sand car parking area, but which will eventually be one of two large football pitches. From here we can also see the canteen, which will have wide open windows to allow supporters to cheer on their teams in competitive matches. Mr Colledge is keen to highlight that sporting facilities will be one of the standout features of this brand-new school,

“The sports facilities will be quite staggering. At the heart of the school there will be a huge sports hall, complete with a full 200m running track. It will be state of the art, with soundproof divisions which will enable us to divide the space into three when needed.  The sports hall will have two full size basketball courts and four smaller courts. We will also have three superb swimming pools and a series of tennis courts. We have the ambition to be one of the best schools for sport in the UAE, and these facilities reflect that”.

Our tour then takes us to the exterior of the campus, passing a reception area and administration block. Mr Colledge explains that car parking will eventually surround the site on all four sides. That said, he is also keen to point out that the entire Khalifa City area is, at present being given a thorough upgrade with new road systems, pavements and cycle tracks, something he hopes may encourage students and families to cycle or walk to school.

The new site spans 14 acres, exactly the same area as the original Raha Gardens campus. The structure is being constructed in a ‘lego-like’ fashion, from concrete build segments that have been pre-cast in Dubai. The speed at which this construction system works is evident when the team explain that the second floor in one block simply wasn’t in place just a few days prior. It certainly looked complete to us!

The classroom blocks have been placed in such a way as to create ‘V’ shaped spaces for play areas. The idea is for all primary classrooms to have doors which open directly on to open play spaces. Play equipment has been carefully planned to allow for an increasing level of challenge as children grow, with a special emphasis on climbing equipment to promote upper body strength. Just as much thought has been given to the appearance of play areas, with earthy tones, planting and simple wooden structures to dominate. The overall effect will be a series of fun and playful, yet not over-stimulating spaces.

The team tell us that the build is now 80% complete and on track for completion in July, ready for an expected additional 400 students to join in September. There will be 8 forms per year group in primary, creating a total of 17 forms per year group across the two locations. The Khalifa City campus will open through to Grade 8 in Term 1 of 21/22, then year on year until every year group is open.

Eventually the Khalifa City campus will be home to around 3200 students, meaning that both campuses of Raha International School will educate around 5500 students in total. An incredible figure!

Inside, the key word for the school under construction is “flexible”. Mr Colledge reiterates throughout our visit the close attention that has been paid to customisable learning spaces in every section and phase of the school.

“The flow and the flexibility of this building is going to be something special. We are putting tons of flexibility in to furniture, classrooms and break out spaces. We’ve ordered much of our specialised seating and furniture from a company called Furnware in New Zealand, and for the younger children from a local supplier, Kids Inc in Dubai. They were the best people to create classrooms and spaces that really fit with our curriculum…the IB style of enquiry based, group learning needs flexible spaces.

“We are proud to be the only all through IB curriculum school in Abu Dhabi, and that has really informed our thinking when it comes to every phase of the design. We don’t want to hold kids on tables, in classrooms. We want them to have personalised learning spaces that meet their needs”.

The school will feature a host of specialist facilities including a ‘black box’ theatre for drama, with seating for up to 300 people. Science will be well served with 10 labs and four science classrooms. There will be a state-of-the-art digital design suite and some ‘seriously funky’ art rooms. The early years department has been designed with ‘flow’ and team teaching in mind, whilst the oldest students will have their own spacious ‘Diploma Suite’. Every classroom will feature a smart TV, which Mr Colledge believes is preferable to the widely seen ‘interactive white-boards’. The school uses mostly Apple tech, although they are (again!) flexible on this and allow students to use “whatever device works best for them”.

The Khalifa City campus will have three libraries (which will be known as Learning Resource Centres), one for Early Years, one for Primary and one for Secondary. The primary library will feature a ‘forest’ theme and will be connected to the secondary library by a set of stairs between the two.

The build is three storeys high (G+2) and at the mid-point of our tour we are able to stand on a rooftop and survey the entire, impressive site.  Eventually this space will be covered in solar panels in order to meet much of the school's energy needs. Mr Colledge takes the opportunity to explain what this build means for the original Raha Gardens campus.

“It’s just beautiful over there, so much greenery and a lovely atmosphere! But we are conscious that it’s older and we don’t want it to be the poor relation in any way. So, we are beginning a year by year programme of renovation to bring the facilities up to date. This is really important to our ‘one school’ thinking.

"Families will apply to Raha International School and, while they can express a preference for one campus, they will not be able to choose. We are inviting staff members to transfer over to the new campus, in order to recreate all the good things and culture we have happening at the Gardens campus. We are very much one school, over two campuses and everything, facilities, management structure…things like buses and catering…it’s all been designed to reflect that”.

As we near the end of our tour of this impressive new school, we ask Mr Colledge how the design will cater for children with additional needs. He is emphatic that the design will create and reinforce inclusivity, saying that:

“At Raha it’s all about integration; we don’t want any student to feel different or separated but we also want them to have the freedom to work in an environment that is best for them. Our rooms will have subdued colours and all areas will have break out, quieter spaces. As for all children, we want those with additional needs to have the ability to work in whatever way suits them best”.

Mr Colledge, a principal who has clearly been heavily involved with the construction of the  school, is clearly a happy man. Not only has he been very much at the heart of the construction of what promises to be an amazing new space for students, he can also now see the finishing line. Given Covid, it is perhaps understandable why this fact is his single biggest source of satisfaction:

“We’re so proud to be on track for completion after all the challenges Covid has thrown our way. It’s not been an easy year to build a school but thanks to the phenomenal team here and at Taaleem, we’ve got there.

We have had to have a plan B, C and D  but thankfully, here we are with plan A, right on track!”