GEMS Al Khaleej International School will celebrate 30 years of education this year. In a fitting way to mark this milestone, the school will also move to a brand-new campus. The new building will see the school move from the densely populated Al Garhoud area to the more open spaces of Al Warqa 4, a stones throw from Dubai Safari Park.
Hard Hat Tour: GEMS Al Khaleej International
By Jenny Mollon 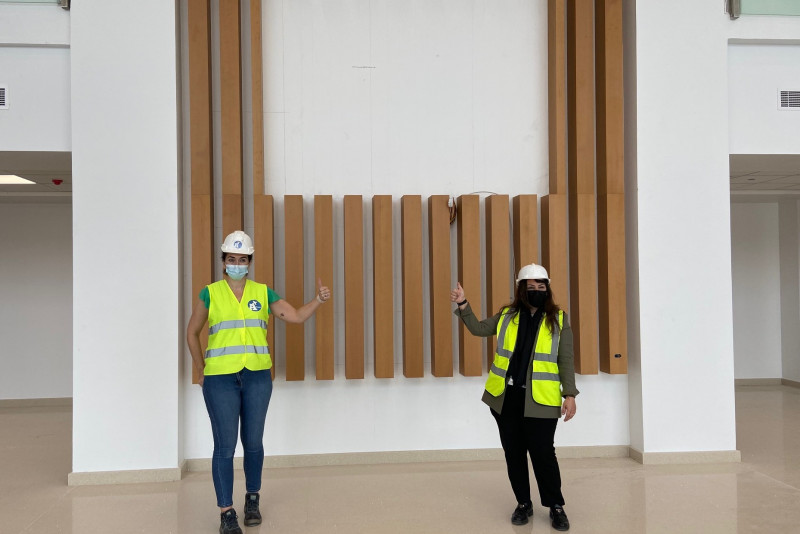 The GEMS Al Khaleej International School community has an exciting year ahead, as the team make the final arrangements to move to a new, much larger campus in Al Warqa 4. The new campus has been timed well, and will coincide with the school’s 30 year-anniversary. Students of this all through, American curriculum school will make the move at the start of semester 2, in early February 2022.

Keen to find out more, our team donned our high vis vests, hard hats and steel toe-capped boots for the first WhichSchoolAdvisor.com Hard Hat Tour of 2022.  We later find we are a little overdressed, as the building is ahead of schedule and, save for furniture and final fit out, very nearly ready for students.


Prior to arrival at the Al Warqa campus, we first drive to the older school in Al Garhoud, with a view to timing the journey that families will now need to make. With some excellent new flyovers in place since our last visit to the area, the drive is a comfortable 12 minutes (albeit done at a little after 9am on a Wednesday morning). We understand that the school will also add an extra four buses to their existing fleet, making transportation as simple as possible for all students.

To us, veterans of numerous school visits, this new building is recognisably a GEMS school, even at some distance. Clad in bright white render, with accents of grey, red and blue both inside and out, the exterior appearance is somewhat similar to the two GEMS Founders schools, in Al Barsha and Al Mizhar. Though similarities in style exist, school Superintendent-CEO Ghadeer Abu-Shamat tells us that her new school will be sit at “mid-market” in terms of fees, whilst offering students a host of premium fee point facilities including swimming pools, robotics labs, numerous sports and performance spaces and enabling the team to consider a number of future curriculum enhancements - more on that later.


Existing parents will no doubt be delighted to note that, if already enrolled, their child is guaranteed to stay on the promised fee structure until graduation. No doubt music to the ears for families of children in Pre-Kindergarten! There will be a separate fee structure for students who join the school after the move has taken place.  More detail on fees can be found in our GEMS Al Khaleej International School Review, but for the 2022/23 academic year, existing families can expect to pay AED35,595 for Grade 12 and whilst newer students will incur an annual fee of AED42,714.

We met Mrs Abu-Shamat just outside the huge reception area. A most welcoming and friendly Jordanian national, once a high school chemistry teacher, Mrs Abu-Shamat clearly cannot wait to move into this spacious new campus. Explaining that the current Al Garhoud campus is full to capacity (with 2050 students on roll), Mrs Abu-Shamat states that the new school will eventually be able to accommodate a total of 3900 students.

“We plan to get there over a five-year period” Mrs Abu-Shamat elaborated, “we wouldn’t add that many students immediately. Our plan is to start bringing our existing students  here for visits from next week. We want everyone to be familiar with the space, and it is important to us that we go through safety and evacuation protocols with students and staff before we make the final move”.

As in the older campus, this KHDA rated “Good” school will cater to students from Pre-K to Grade 12. Reflecting the cultural norms of the community the school serves (around 90% Arab Nationals, with 55% Emirati students and the remainder from other Arabic speaking nations such as Egypt, Jordan, Lebanon and Iraq) boys and girls are segregated from Grade 5. Once in Grade 6 and above, there is an entirely separate boys and girls wing of the building, as well as some separate facilities such as play areas and “MUGA” courts (multi-use game area) for sport. In other (shared) facilities, male and  are female students are kept apart by timetabling.

“I am always accessible to parents and I operate with an open-door policy. I will leave meetings to see parents, they know they are my priority and I know that they need my support. I believe in transparency and never hide things”.

Mrs Abu-Shamat’s office overlooks the Kindergarten play area and the KG phase is our next point of call. There will a separate reception/entry for the youngest students and, eventually, 20 classes in Kindergarten, each with a maximum of 25 children. Every classroom has been designed to allow children access to outside space and many open directly onto the play area. The KG children will also have a separate space with a huge sand play area. Inside, there are breakout areas for group work and play.

Throughout the school, classrooms average around 55m sq.

As we pass through the remainder the elementary school, Mrs Abu-Shamat explains that, as part of the school’s strategic five-year plan, the team are currently conducting a feasibility study into the possibility of offering the IB Diploma and PYP programmes, in addition to the American Diploma.

The tour takes in many more of the facilities that the students will soon have access to. Mrs Abu-Shamat jokes about the size of the school and the time her daily morning walk will take “I think I need an electric scooter, it will be at least 90 minutes otherwise!” she laughs.

We see a 25m swimming pool, adjacent learners pool and spectator seating, a soundproof multi-purpose hall with stage and seating for 350 people (without social distancing), a large sports hall (also soundproofed), a parent café and seating area, a clinic and isolation room, numerous prayer rooms, several science labs and bright art rooms, girls and boys libraries, a robotics lab (full of just arrived 3D printers!) and two large staff rooms. The rooftop spaces are also huge, and although not intended for use immediately, will make space for extra facilities (sports courts) in future.

The school will now have lifts for use by students with additional physical needs, making all of these facilities accessible to all.

GEMS Al Khaleej International School is blessed with great views in either direction. From the front of the building, one can look across the Dubai skyline, taking in the Burj Khalifa, and in the opposite direction, you can see the green spaces of the Dubai Safari Park.

With just under one month to go, GEMS Al Khaleej International School, Al Warqa campus is very close to final completion and to welcoming students. The move to the campus was an requirement of the school recently achieving NEASC (New England Association of Schools and Colleges) accreditation.  Mrs Abu-Shamat is already preparing to receive the NEASC team and present the new campus.

We liked the new school very much and admire the team for such fantastic organisation and preparedness.  GEMS really does have the process of creating new schools finely tuned.  If there was one design niggle we would change, it is the very long, very uniform and mostly windowless corridors that each area of the school has. That said, given that these corridors are connecting students to some great new spaces and high-quality facilities, we doubt very much that they will share our concerns!