GEMS World Academy Abu Dhabi’s new Reem Island campus will soon be ready for its awaited opening in September 2022. As well as moving to the new premises, the school is also expanding to Year 8, later becoming an all-through school. It has also announced a broadening of its curriculum to provide a "world of pathways".
Hard Hat: GEMS World Academy, Reem Campus
By Susan Roberts 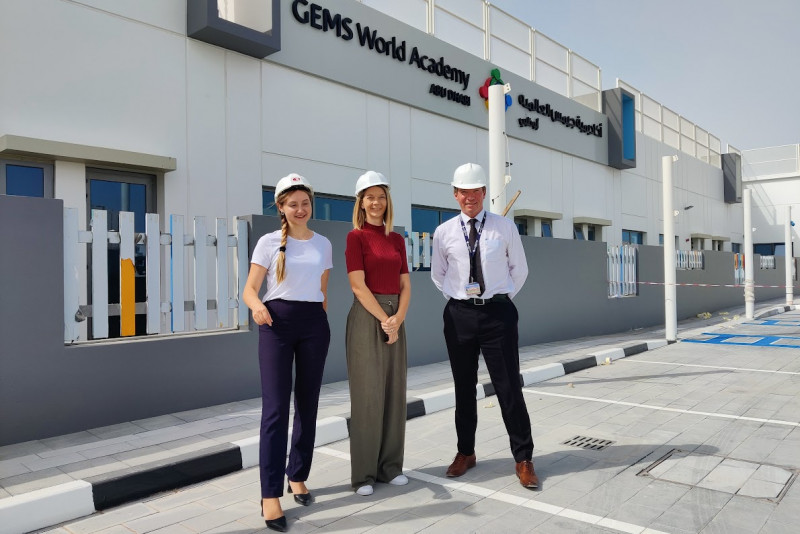 GEMS World Academy Abu Dhabi’s new Reem Island campus will soon be ready for its much awaited opening. In preparation for September 2022, the school will not only move to its brand new premises, but will also extend its provision, initially to Year 8, before becoming a full, all-through school. GEMS World Academy Abu Dhabi is simultaneously expanding its curriculum offering to provide a range of learning pathways. Amidst the hustle and bustle of a school on the move, we spoke to GEMS World Academy Principal/CEO Kelvin Hornsby, to find out more, and to take a hard hat tour of the new campus.

We visited the all new GEMS World Academy Abu Dhabi campus site on a very warm June morning. The new facility, we were assured, is very much on schedule for completion at the end of August, and is just receiving its finishing touches. Despite the heat, Principal/CEO Kelvin Hornsby guided us around the site with energy by the bucket load; this is clearly a project that he is thrilled to lead. “It’s really, really exciting,” he told us, “It's pretty much five years in the making. Our families at GEMS World Academy have been promised a wonderful facility and that is exactly what we’re providing.”

Mr Hornsby explained that the new campus, in its current form, has capacity for around 1,100 children, however GEMS Education has ear-marked space for expansion in the future as the school grows.

The school's relocation brings with it a notable expansion of the pathways offered in the senior years. Until now, it has provided the IB Primary Years Programme only, but will extend that to the Middle Years Programme and, in due course, the Diploma Programme (and possibly the IB Career-related Programme). With a change to its licensing, the school will also now offer iGCSEs, A-levels and BTEC courses. Offering this range of pathways within one school will be a first in Abu Dhabi, and is likely to to be a draw for many families. The advantage is simple - students now know they will not need to move, whichever post-16 pathway they choose.

Mr Hornsby told us about the school’s decision to provide such a broad range of pathways to its learners:

“By offering these pathways and qualifications from the British curriculum, in support of our International Baccalaureate programme, our overall education offering is significantly enhanced with increased personalisation. Our students will be able to choose from a diverse ‘world of pathways’ that includes the time-tested rigour of the National Curriculum for England and the inquiry-based approach of the International Baccalaureate, leading to qualifications that are sought-after and highly respected among both universities and employers the world over.”

In discussing the school’s “world of pathways”, Mr Hornsby made reference to his own three daughters, whom he described as “very different to one another; one very academic, one vocational, and one who shines on the sports field". Having had his own children attend another GEMS school (in Dubai), that likewise offers multiple pathways to its learners, Mr Hornsby told us that he has seen first hand the benefits in a more tailored approach in his own children, and is proud to roll this out in GEMS World Academy Abu Dhabi.

With the opening of the new campus, the Early Years Foundation Stage is to be introduced for the school’s youngest children, from the age of three, utilising IB principles alongside the EYFS framework. The school's FS1 classrooms (example pictured above), although not vastly spacious, each have direct access to a small outdoor play space dedicated to this age group. They are also adjacent to a number of shared additional indoor spaces, and beneath a very large roof-top play space (see below). This play space in particular is a good example of the creativity in the design of this campus, maximising the utilisation of the facilities throughout.

The early years section has its own entrance, and although the school's youngest learners will have access to facilities in other parts of the school, the semi-enclosed nature of this part of the school is sure to be a positive for a safe and nurturing early learning experience.

The new campus also has considerable creative and performing arts facilities. There is a 300-seat theatre, a drama room, multiple music rooms and art spaces, including (unusually) an outdoor art space.

The quite remarkable space that is due to soon be transformed into a large school library is particularly eye-catching. The round centre of the library, which has plentiful natural light flooding in, branches off into smaller more secluded reading corners, in order to provide a suitable environment for every age group.

The provision of a "parent bistro" is aimed at encouraging parent presence and engagement in the school, as part of the team's efforts to ensure its community feel is not compromised as it expands. This will likely be a feature that parents welcome, following Covid-19 restrictions that have not allowed for parents to enter their children's schools.

The excitement about the opening of the new campus and the growth of the GEMS World Academy Abu Dhabi community is shared, Mr Hornsby told us, by parents, children and staff alike, who will return after the summer break to the new facility and curriculum expansion. WhichSchoolAdvisor.com is very much looking forward to watching the new GEMS World Academy Abu Dhabi take shape and develop. Many Abu Dhabi families are likely to be attracted by the diversity of pathways offered within one school, and our editors agree that offering choice, and a tailored approach for students, is a positive move forward for the school, and Abu Dhabi.