GEMS Education has announced that GEMS Founders School in Al Barsha will expand, initially by 1,000 seats. Eventually, the planned expansion will see this English National Curriculum school create space for a total extra 1800 students and 6,000 students in total.
GEMS Founders Expands to 6,000 Capacity
By Jenny Mollon 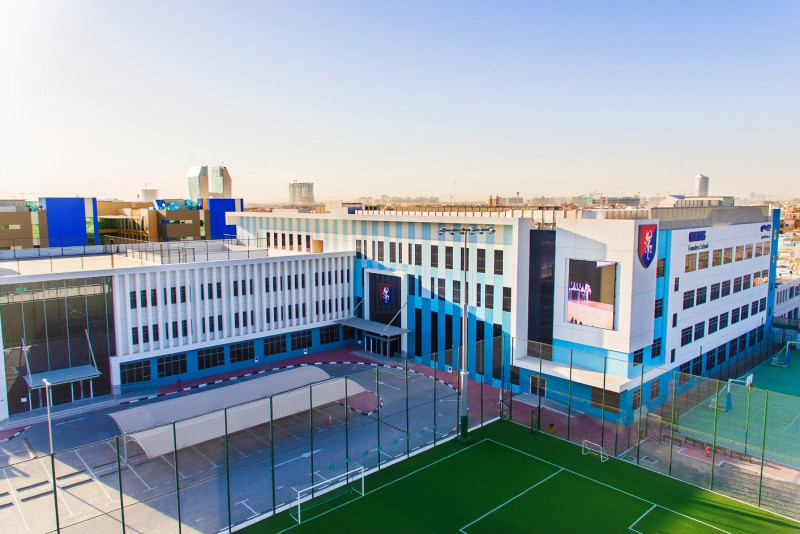 GEMS Founders School (GFS) in Al Barsha is set to expand. The affordable English National curriculum school will see its campus grow and take in the adjacent site, once occupied by (the now closed) GEMS National School for Boys.

GFS currently educates around 4,200 students and the eventual extra capacity will see this number rise to closer to 6,000. We believe this will create one of the largest English National curriculum schools in the UAE.

The school originally opened in September 2016, with ‘record numbers’ of students joining from day one. The expansion will not only increase capacity, but will enhance facilities, with students having access to two additional sports halls, two multi use games areas, a football pitch, a dance studio, two libraries, one dining hall and an additional 200sqm of playground.

Clearly, GEMS Founders hit a sweet spot in the UAE. Its model of premium curriculum, modern facilities and an affordable fee structure has seen both the Al Barsha and Al Mizhar (which opened 2018) branches thrive, with the Al Barsha branch reported to be running a wait list for places. Parents appreciate the option of a ‘British’ education at a less than premium fee point.  A third Founders branch has been mooted for the Al Waha area of Dubai.

GFS received a ‘Good’ rating in its first KHDA inspection and its remote learning programme was graded ‘Developed’ (the highest possible grade) during the remote learning evaluations.

Matthew Burfield, Principal and CEO of GEMS Founders School Dubai and Vice President, Education at GEMS Education has this to say on the school’s expansion,

“The GEMS Founders brand has shifted the education landscape in Dubai, ensuring families have access to the fantastic quality they have come to expect of a GEMS Education school and at an affordable fee point. The success of the GEMS Founders model is reflected in the opening of a second GEMS Founders School in Al Mizhar in 2018 and now the further expansion of the school. We are incredibly excited about the additional opportunities this campus expansion will offer our children”.

GEMS National School for Boys (which previously occupied the space GEMS Founders will now take over) merged with its sister school, GEMS National School for Girls at the start of the 2020/21 academic year. Both schools offered the English National curriculum, and were specifically aimed at Emirati and other Arabic and Muslim families by including a strong focus on UAE culture and religion and a dual language curriculum.

The new school, is now named simply GEMS Al Barsha National School and will continue with its emphasis on Arabic language and culture.