The British School of Khubairat have paid a special tribute to Queen Elizabeth II, sharing photographs and memories of her 1979 visit to the Abu Dhabi school.
A Farewell: BSAK Remembers Queen's Visit
By Susan Roberts 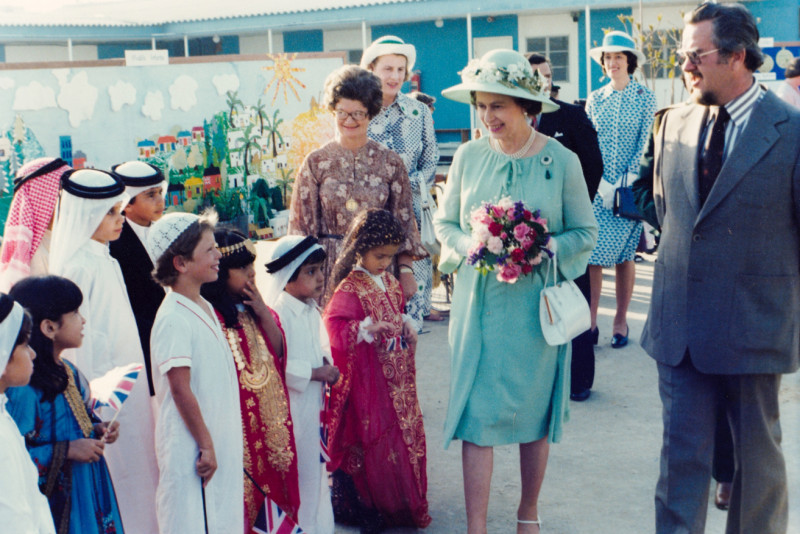 As admirers of Queen Elizabeth II around the world honour her life and service, the British School Al Khubairat pay a special tribute, sharing images of a memorable visit from Her Majesty Queen Elizabeth II, in 1979.

The British School Al Khubairat (BSAK) in Abu Dhabi received the great honour of a visit from Her Majesty Queen Elizabeth II, during her first visit to the UAE in 1979. In a touching tribute to the monarch, 'BSAK' has shared images of the momentous visit to the school, which many former teachers and students remember with great fondness.


The British School al Khubairat opened in 1968, as ‘Al Khubairat Community School’ and was built on land donated by Shaikh Zayed bin Sultan Al Nahyan, as a non-profit school, under the patronage of the British Ambassador. Now situated in Al Mushrif, the original campus, visited by Queen Elizabeth II in 1979, was located in Abu Dhabi’s Corniche area.

Queen Elizabeth II and Prince Phillip were greeted by students and teachers and given a tour of the school’s facilities by Headmaster, Alan Hatter. Around 2,000 well-wishers reportedly turned out to greet Her Majesty in the school grounds.

The school’s royal guests were presented with an exhibition on the International Year of the Child, a United Nations initiative raising awareness highlighting hardships faced by children globally. A representative from the school described:

“It was a colourful occasion where the student population was encouraged to turn out in national dress, reflecting the multi-cultural community of BSAK, with stalls set up to serve food from all around the globe.”

Ruth Giles, who was a teacher at the school at the time of the Queen's visit, shared her memories on the school's social media:

It was a wonderful day for pupils, staff and parents. I was a young 23-year-old teacher there at that time. It was so exciting for the pupils and staff to meet her. Rest in Peace Your Majesty.

As a mark of respect, The British School of Khubairat has lowered its British union flag, which will remain lowered until dawn the day after the queen's state funeral. Headmaster Mark Leppard shared his reflections:

"We are all saddened at BSAK to hear of Her Majesty's passing. She was a beacon of public service, working tirelessly throughout her life for her nation, right up until her final days. Farewell Your Majesty and thank you for your service."