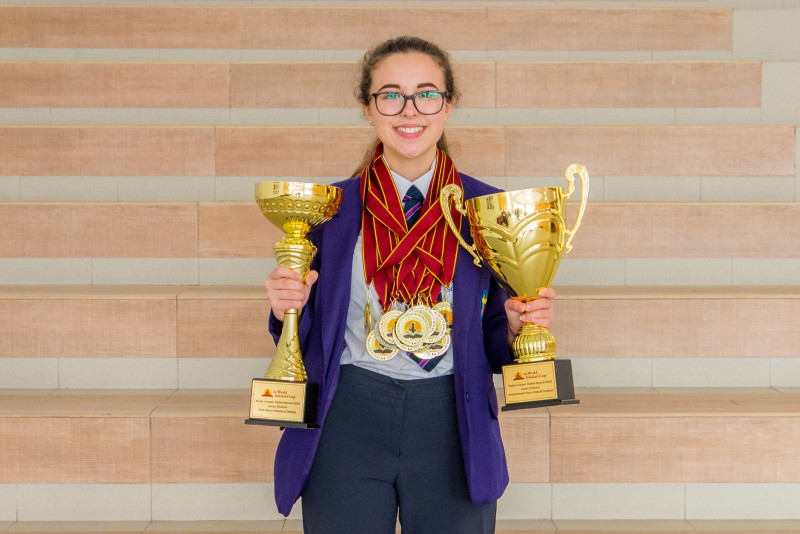 A Dubai based student has won the title of the “World’s Best Debater” in the Individual Debate Challenge at the World Scholar’s Cup Global Finals held in Malaysia.

Carlota Figueroa Ortiz, a Year 9 student at Sunmarke School Dubai, competed with students from 40 countries to win the title.

We chatted with her on why she loves, and is so effective at public speaking. Being annoying and argumentative, she told us, has really helped...

How did you get into debating?

To be completely honest, I’ve always been a very argumentative child. Since I was small, I’d always be the one to point out the flaws in people’s points and arguments and, frankly, not many people liked that. In fact, I was considered an annoying child because I found the faults in what the adults said and (as I’m sure most teenagers are aware of) adults really don’t like being corrected by someone younger than them.

In addition to adults hating how argumentative I was (and still am), other children hated it too! So I was just stuck there telling people why they were wrong or why their points made no sense and getting a simple “whatever” in response. Then, I was introduced to debating...

In debating I’m not only allowed to argue, but I get a coherent response back! People actually want to argue with me! I found the the one place in which my passion isn’t mocked or dismissed - but reciprocated.

How did you prepare for the World Scholar’s Cup?

Preparation was very tough. I joined the programme a couple of weeks prior to the Dubai Round II so I was already behind schedule with revision.

From the curriculum perspective, I prepared by reading through the guide that our coach prepared for us (thank you Mr Bishop!) and then doing further research, constructing my own notes and testing myself through Quizlets.

For debating I prepared by well, just debating. We’d run mock debates against other teams in my school and have other students within the program adjudicate us. Since we were adjudicating as well as debating ourselves, we got to learn how a judge’s mind works which has then in return helped us grow as debaters for we know how we are graded and what works and what doesn’t.

We weren’t given school-hours to do this so we all met up every day after school for about a week prior to the Dubai round and two weeks prior the Kuala Lumpur Global round. In fact, we gave up our Eid holidays to prepare for the Global round!

It has been very tough and I’ve had to sacrifice a lot of free time but it was honestly totally worth it!

So, you are the world’s best debater, how does that title feel or does it weigh on you?

It feels very weird as I couldn’t have possibly imagined back in April when I first joined the program that just three months later I’d be considered as the best debater within the programme. It also feels incredible because I see that all of the hard work I put in has paid off and, as egocentric as it may sound, I love being able to say that I am the best debater in the world within the programme (even if it doesn’t feel completely real).

Nevertheless, while it may make me feel elated, it puts huge amounts of pressure on me. Looking forward to TOC (Tournament of Champions) in Yale later this November, I will be attending and possibly known as the best debater in the programme, and I have to keep that title. Now I have these expectations set on me that I should again come out as the top debater even though I’ll be debating and competing against the best scholars in the program and that will be incredibly difficult.

However, I do love a challenge and hope that I will be just as successful as I was in Kuala Lumpur!

Any major competitions that you have your eyes on in the future and why?

Yes I honestly never stop. In fact, just a couple days after we returned from Kuala Lumpur I gave a TEDX talk at my school! I’ll most likely be attending Tournament of Champions this year simply because I want to see how far I can really get.

I grew massively from regional to global and want to grow and improve even more for Tournament of Champions. Having placed 17th overall in the global competition, I’m looking to improve that in Yale and hopefully be able to take one of the top positions. The World Scholar’s Cup makes me so happy that I never want to stop competing in it and Tournament of Champions is the best way for me to close this year’s World Scholar’s Cup cycle.

Are you going to be pursuing a career that involves debating or winning arguments?

Actually I’m looking at doing a double major in the two careers that you possibly need debating for the most: law and politics. I will (hopefully) end up as both a lawyer and a politician for that is what deeply moves me: helping people.

Both law and politics are incredibly argument based, from court cases through to political campaign speeches, so I feel like all of the training I have been doing will be incredibly useful!