A number of schools and parents have stated the importance of team sports for girls after a Federal National Council Member stated that "girls should learn how to cook instead of playing dangerous sports like rugby".
Schools, Parents Reject 'Rugby for Boys' Claim
By Veathika 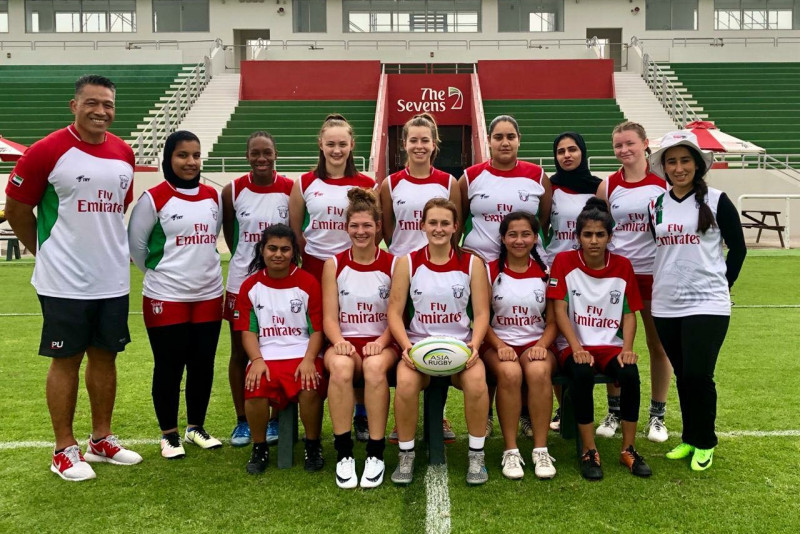 Parents and schools have reacted to comments made during a debate at the Federal National Council (FNC).

Speaking at a debate on Tuesday of this week, a FNC member said that "rugby is too 'rough' for girls [who] instead should take cooking classes to become the 'perfect housewife'”.

Salem Al Shehhi, a representative for Ras Al Khaimah in the FNC, said cooking lessons were disappearing from UAE schools, while students were instead playing a “dangerous” sport.

“This sport is considered one of the most dangerous sports and today girls are playing it in high school, whereas one of the most important skills to be taught in school has disappeared: cooking classes,” Mr Al Shehhi said during a debate in the UAE's parliament.

Jameela Al Muhairi, the Minister of State for Public Education, said that a variety of sports have been introduced in UAE schools, adding that the country is excelling in rugby.

“We are preparing to introduce cooking clubs in schools, so girls can learn how to prepare healthy meals as well. Rugby is not alien to us, it has been practiced in the UAE for years and we have the UAE Rugby Federation and the UAE team has won several medals in the sport across Asia,” said Ms Al Muhairi.

The debate came after FNC members discussed a fall in obesity levels due to sports and healthy eating.

Online reaction to the comments indicate that many schools and parents in the UAE believe that there should be equality in sports, as well as other life skills like cooking.  Rugby being a contact sport is often misunderstood as being ‘dangerous’.

Samantha Kane, mum of the under-18 UAE girls Rugby Captain, Alex Kane was initially a little unsure about her daughter playing contact rugby.

"Alex has been playing contact rugby for the last four years.  Both my husband and son are rugby players and this is where she got her initial interest in the game.

I admit, I was a little unsure about her playing contact rugby initially as she was only 14, but she quickly became so passionate about it.

She has enjoyed great success as current Captain of the Exiles U19 Girls team and Captain of the UAE U18s Girls National team on their recent tour to India for the Asia U18 Girls Tournament.  Girls rugby is becoming increasingly popular and both my husband and I will support her to take this as far as she wants to go," added Ms Kane.

Andrew Williams has been a rugby coach in Dubai for 11 years.  He has coached teams from all ages, including U6s to U19 Girls. Mr Williams told WhichSchoolAdvisor.com that he has seen UAE girls rugby develop rapidly, with player numbers and teams from both schools and clubs growing.

“I have twins (1 boy and 1 girl) – both play rugby and both have recently gone to university in the UK…both are continuing their rugby but, equally, both need to be able to cook, clean and generally look after themselves so in essence the choice that is described is not a choice – both are important aspects of life and not dependent on your sex.

My daughter, Chloe, is now playing for Loughborough Lightning – one of the top teams in the UK for ladies rugby, and she is loving the experience!”

He believes that Rugby is a unique sport for girls in the UAE in that, whilst there is an element of physical contact, the benefits far outweigh any risk from contact.

“The value of the game and the spirit that it is played, coached and supported is what makes it special. Girls learn discipline, respect, trust and team working skills, and no other sport appears to create the friendships off the pitch and after the game that the rugby enables.”

Robin Giles, Director of High Performance Sport at Dubai English Speaking College (DESC) believes that rugby is a diverse sport, suitable for boys and girls, and sees the core values of rugby - teamwork, respect, enjoyment, discipline and sportsmanship - as important for all aspects of life. Rachel Owens, Coach at the Mike Phillips Rugby Academy in Dubai agrees:

"As with any team sport, rugby promotes teamwork, leadership and athleticism. I cannot think of one reason why girls should not learn to play. Rugby is challenging and incredibly good fun and around the world women are now competing at the very highest levels.”

According to DESC's Director of High Performance Sport the key to keeping the sport safe is training, and fitness..

“At DESC, the girls can train twice a week with highly qualified and experienced coaches, ensuring that girls do not take part in contact rugby until they are equipped with the skills and techniques in order to perform safely.

Research suggests that if techniques are taught properly and the athletes are fit, then the chance of injury is dramatically reduced."

At Jumeirah English Speaking School (JESS) all boys and girls are encouraged to play sports, including rugby. The school has a very successful girls rugby team.

“Every sport is potentially dangerous - that’s why players train and practise with qualified teachers, so their bodies and minds are prepared. Through playing a sport you gain the obvious health benefits but it also teaches you a range of vital life skills.

At JESS, we want to teach all our students, boys and girls, the valuable life skills they will need to live successful and independent lives after school.

To this end, we recently introduced the Making A Difference Project where all our students (from 5 to 18 years of age) are taught how to take care of themselves and their environment.  Skills such as: cooking, washing, ironing, setting budgets and financial control.”

Mr Giles firmly believes that girls should have the opportunity to take part in all sports, contact or non-contact, as removing a sport removes a possible opportunity to improve someone's health and well-being.”

“My wife played rugby, is a great cook, an amazing mother and has a superb career. I don't believe that we should be removing freedom of choice, I think we should be encouraging diversity as we still don't know what the jobs of tomorrow may look like; every new skill our children can learn will only aid them in learning to adapt to the ever changing challenges this wonderful and diverse world throws at us.”