50-year-old American School of Dubai is bracing for changes with a purpose built middle school, and new High School Principal for the next academic year. The school wants to be the "most relevant'" school in the city.
ASD Eyes Future With New Head, And Expansion
By Veathika 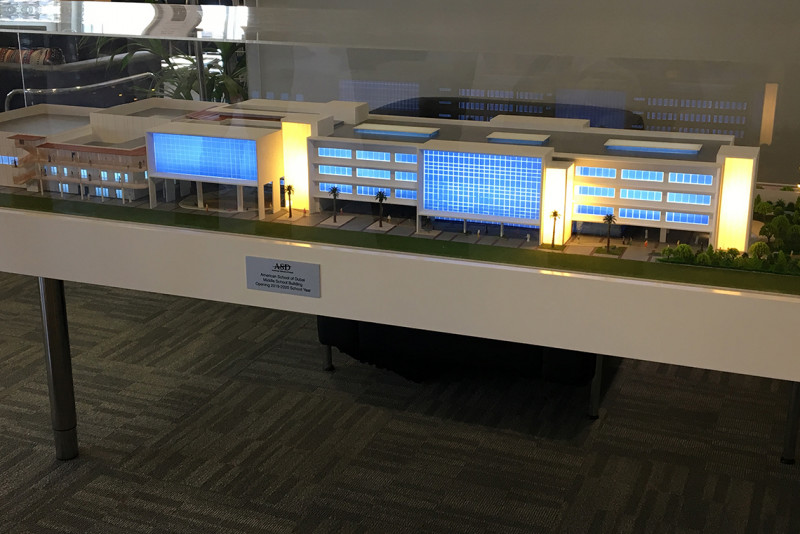 The American School of Dubai (ASD) has announced its plans for a more 'progressive' and 'modern' future,  with a new standalone building for its middle school by 2019, and a new Head of High School for the next academic year.

While the middle school will benefit most from the new building, the High School is also set to benefit, taking over the middle school's current premises, allowing it too to grow, both in the number of classes and in staff.

“A standalone middle school is something that is, perhaps, a little unusual but we see the demand to be for older students, especially for US curriculum based schools.

We had an opportunity to develop some land adjacent to our property and it is going to help us meet the needs of the North American population or those looking for the US curriculum. For a long time have had a waiting list. This will help us get ahead of it."

The new building is expected to take 14 months to finish and once complete, the capacity of ASD will increase to somewhere between 2250 and 2350 students, from its current 1830.

The school aims to hire more staff and enrol more students from middle years for easy transition into the new building. As a result the school is now promoting its availability for the 2018-19 academic year for Grade 6 to 11.

Stepping into the breach as the school begins its expansion will be Nadine Richards, the new Head of High School, who is set to take over from Dr. Steven Leever, the current High School Principal, from September.

“We looked all over the world for a replacement but in the end we found Nadine in Dubai. She was the best choice and was very well supported by the community in the high school. We lucked out. Nadine fits right in with our mission and our progressive look at our high school education and the fact that she is familiar with the city and the KHDA is an upside as well. At heart she’s a progressive American educator who will fit into the ASD ethos."

Nadine has previously been head of school at US curricula based Al Maaref School in Dubai, and Assistant Principal at Glen Cove School in New York. For the last ten months Nadine has been working on her own consultancy, Nadine Inspires, "an education solutions start-up consultancy, and an ongoing project for changing and improving the landscape of education for the betterment of all children across the globe."

One thing that has not and is not changing at ASD is the confidence it has of its position within the American community.

“We feel we are in a very strong position being a non-profit school, the non-profit model has distinct advantages particularly around recruiting the best teachers globally and with transparency around finances, as 100% of the funds collected from the tuition go right back into the programme. We have no owners or investors who take their bit and we are that rare model of non-profit that has been here for 50 years.”

That said ASD is not resting on its laurels.

“We are in a strong position but not complacent and we are becoming more progressive and modern. We will be launching a more strategic plan in a month’s time, which is really a way to make our school experience more relevant to this generation of students."

One particular focus for the school will be Islamic Studies and Arabic within the curriculum. The school aims to be fully compliant by next year in Arabic.

“We are working towards compliance towards Islamic studies with the KHDA. We have to work with the Charter of the US State Department that a Not for Profit American school is assigned to, as well as the Ministry of Education, from whom we have received a clear charter on Islamic Studies.

We are progressing towards being the most relevant school in this city and in this day and age.”

One particular change the school is happy with, and that showcases why the not-for-profit school has been popular with its parents concerns a drop in rankings... ASD has always been known for its premium fees and often touted as one of the most expensive schools in the city. It has however, for the first time, dropped out of the top 10 most expensive schools’ list.

“We are happy to no longer feature on that particular league table.

We don’t raise our tuition fees by as much as the KHDA permits. We raise it quite moderately. Last year we raised it by 2.9% and this year it’ll be around the same level.

As a school we raise fees only as much as we need to advance the programme...