In this special feature we talk to a Dubai teacher, Sharon Robertson, Head of Early Years at Kent College Dubai, about becoming a parent by adoption. Dubai residents, Sharon and her husband Keith, adopted their daughter Mayeteh from Sierra Leone in 2018. The family’s story is both moving and inspiring.
UAE Adoption: Dubai Teacher Becomes a Mum!
By Jenny Mollon 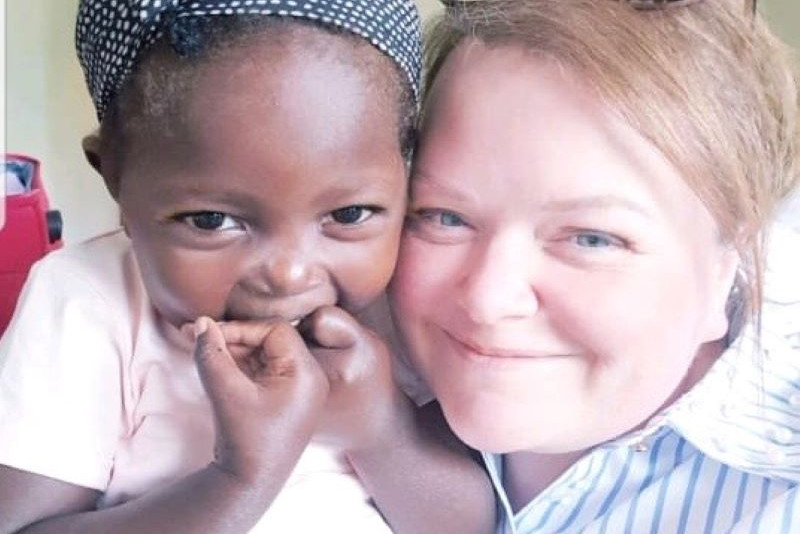 A hugely moving and inspiring story, WhichSchoolAdvisor.com spoke to Sharon Robertson, Head of Early Years at Kent College Dubai, about how she and her husband Keith, adopted their daughter Mayeteh (pronounced 'Mighty') from Sierra Leone in 2018. We began by asking Sharon to tell us a little bit about herself...

I’m from a big Scottish family. I was raised with three siblings and a big extended family of cousins, aunts and uncles around me.

I had always known I couldn’t have children due to different health issues, so I think I was always looking for something more, some way to give. After High School, I went to volunteer with a homeless shelter in Luton – much to my Mum’s dismay! I’d only ever left Scotland on family holidays before, and at 17 my parents thought I was too young, but I was determined! I begged, really begged and eventually I moved to London. Working with homeless people, watching grown men ask you for food, well…it was a humbling experience. At a young age it gave me an understanding that life is harsh for so many people.

Later that year I was involved in a car accident and nearly lost my foot. I lost my mobility, my independence, I even lost my hair…for a time, I felt that life was truly unbearable. Slowly, the support of family and friends helped me to decide that my life was not going to be defined by misery.

I set myself the goal of training as a psychotherapist and when I had recovered a little, I went to work in a centre designed to support recovering addicts and their families. I was still on crutches so they were a bit dubious about taking me on! I sent letter after letter and convinced them to let me work there. The ethos of the centre was to support addiction afflicted families to stay together. To achieve this, we ran a small baby unit on site, and a nursery in the wider community: this became my first taste of working with children.

After a few years working at the treatment centre I decided that the time had come to go back to university. I studied for my B’Ed in Early Years Education, a qualification which has eventually led me to become Head of Early Years at Kent College Dubai.

When did you decide to adopt?

When you know you can’t have children, it’s a feeling that never goes away, like a deep heart burn inside. Keith and I have poured love into our relationships with our nieces and nephews back home, we’ve travelled and been very happy with what we have had. But deep down we always wanted to be parents. Moving to Dubai and establishing our lives here gave us the financial security to begin the process and we have been very grateful for that.

The process of adopting in Dubai does change periodically, so first of all I would like to say to anyone starting this journey: please get good legal advice.

The process for us began with the home study. A psychiatrist visits you at home on ten separate occasions. It’s like you are mentally and emotionally taken apart and put back together. It was painful, but the upside was the way in which it helped me to reflect on my love for my own family. Adopting has helped me to become closer to my parents and siblings in many ways, but most of all because now I can relate to them as a fellow parent.  We are all in it together!

After the home study comes the paperwork, which is a challenging process too! Once that was done, we were able to make our first application. We applied to adopt a child from The Democratic Republic of the Congo (DRC). We submitted all the paperwork and then treated ourselves to a holiday, thinking that we would be coming back to be matched with a child. It was so exciting! Unfortunately, while we were away, we received our first blow. The rules for adopting from DRC had changed overnight and we were no long eligible. That was the first hurdle, but we picked ourselves up and continued.

Our next application was to adopt a child from Uzbekistan. This time, we were matched with a baby girl, who we nicknamed Nia. To begin with, the process seemed to run smoothly. We had photos of her and letters from Uzbekistan referring to us as “Mum and Dad”. We passed milestones such as her first birthday, first Christmas and we tried to mark them with gifts and small celebrations – we wanted to be able to show her that we were lovingly preparing for her, even before we met her. We created a nursery and made our home ready for her.

Waiting for Nia’s adoption to complete was a very tough time. Slowly, it became apparent that this was going to be a difficult adoption. One day at work, I looked at my phone to see that I had more than 50 missed calls from Keith. I couldn’t bring myself to answer: the 50 missed calls told me all I needed to know. After 15 months in the process, we had received official notification that we would not be sucessful in adopting Nia.  Ultimately it came down to a paperwork formality and decision by the British Embassy, which was heartbreaking.

That night I could barely speak. I tried to think of the children in our families at home. Maybe that’s our job, I thought - to be aunt and uncle and to support their parents. But even as I thought this, another thought came to me. What if this is just a test? Maybe not everyone is strong enough for this. Maybe you are here, now, because you can do this?

It seemed an unbelievable turn of events that the very next day we heard from a contact in the adoption community here that there was a very ill baby in an orphanage in Sierra Leone.  The little girl needed to get out of the country within the week for medical treatment. I sat looking at the things we had been preparing for Nia for so long – the crib, the pushchair, the bassinet and wondered – can I do this? Could I have a baby within the week?

I always say that when you are adopting, you have to live ‘in your head’. If you let things go to your heart, you’ll never survive. Just as I began to prepare myself for the baby, we heard the news that she had been adopted by an American family. Again, this child was not going to be the one for us.

How did you meet your daughter, Mayeteh?

After we missed the chance to adopt the newborn baby, it all happened so fast. The same contact heard from a lawyer in Sierra Leone about a little girl named Mayeteh who was also ill and also needed adopting as quickly as possible.

We were given a picture of Mayeteh and the true magnitude of what we were doing hit me. Mayeteh was covered in bite marks from wild animals, as she had lived most of her life outside, with no shelter. Could I do this? Nervously, I sent the picture to my Mum, who simply responded with “I love her already” That was it! The instant and genuine love both our families have had for Mayeteh has been incredible.

A few days later we flew to Sierra Leone.  Through the early stages of my career, I have seen poverty and deprivation in the UK. I thought I knew what these words really meant. It was only when we arrived in Sierra Leone…well…it’s just so hard to describe. I can only say it was like acid being thrown into my eyes, that’s how shocking the conditions I saw were.

The journey to the orphanage was so difficult and frightening, it truly was a labour of love. At one point we were put on a speedboat that was so packed full of people and animals and luggage, I was certain it would sink. I thought…maybe this is it, maybe this is how our journey ends!

When we arrived at the orphanage, the director simply looked at me and said “come and meet your baby”. There, playing in the dirt on the ground was Mayeteh. I bent down to say hello and she looked up at me and scowled (and I mean really scowled)! Mayeteh was very sick. She couldn’t eat or drink, she had a urine infection, her skin was terrible from all the animal bites and she was in desperate need of treatment for malaria. Her arms and legs wouldn’t bend from malnutrition, so she couldn’t walk. Her complete vulnerability broke my heart.

To complete the adoption, we were required to leave the country and then return again. When we returned to Sierra Leone 10 days later, I felt more confident around Mayeteh and once she relaxed with us again, well...our relationship has never looked back!

Mayeteh came into our lives so quickly, we have never had a chance to gain closure over what happened with Nia. The not knowing is really hard. Is she ok? Did she find a family in the end? The only thing I can say is that we have managed because we have always been surrounded by good people. You slowly learn to live with it and Mayeteh brings us an incredible amount of joy.

Has being an Early Years specialist teacher helped you with Mayeteh?

I have always said that the bravery in children is phenomenal. Mayeteh is so incredibly brave! She is also cheeky...and a real chancer! I am a firm believer in learning through play and Mayeteh can turn anything into a game. In my career, I have had lots of comments about how innovative my teaching is, and when I look at Mayeteh I see innovation all the time. I really enjoy that – it’s like I am living my own pedagogy!

Mayeteh is now in FS1 at Kent College Dubai. It's great that she knows I am here every day too. The feedback I have had from her teacher tells me that what I see in Mayeteh, the school sees too, which is wonderful.

Sometimes I look at her with her friends, running around and playing and you know what? They are all the same, you’d never know what she has been through!

What is your life as a family like now?

Well, we get a lot less sleep! [Sharon laughs]

Keith is a wonderful father. He’s never for a moment complained about any of the change or upheaval we have been through. We both love when people say she has a Scottish accent! Just as with any parents, we worry about the world she is growing up in, but I always think she will be fine, because we love her. We can’t give her anymore love than we give her now and that will see her through.